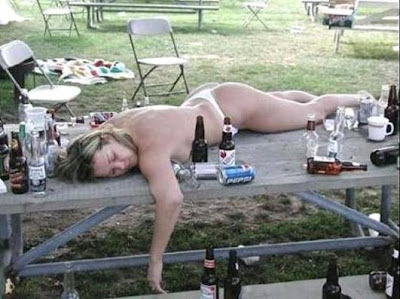 This past weekend was one of those quasi-long weekends in Canada where the statutory holiday (Canada Day) fell on a Tuesday. Half the people I know took the Monday off and voluntarily worked Tuesday, forgoing the ultra-Canadian tradition of throwing horseshoes and sitting out in the sun all day while listening to Neil Young and the Tragically Hip; while the other half kind of coasted through Monday with a half-assed effort, only to find themselves facing a Canada Day celebration curtailed by the fact that they knew they would have to get up for work the following morning.

The result of this half-assed long weekend, as you might well expect, was a half-assed binge drinking effort on most everyone's part. As I look back on it, there were very few moments I didn't have a beer in my hand, yet with the exception of a very late and extremely intoxicated Friday night, I went the duration of the long weekend without getting drunk. Somewhere out there, Terry and The Deaner are pouring out a Pilsener for my youth.

Just to recap: Attended a city wedding Saturday night with an endless supply of Stella Artois, and was able to acquire little more than a decent buzz before climbing aboard the streetcar and heading for home. An all around pathetic display at the open bar.

Drank a few Steam Whistles in the afternoon on Sunday before engaging in a sad display of schoolyard basketball, sweating just enough to completely offset the beer drinking, and then headed out to see the world's most overqualified cover band at Scruffy Murphy's. The band, comprised of many members of the now-defunct Staggered Crossing, was absolutely out of this world, often switching instruments mid-song, making every single track sound like one of their own, and absolutely rocking the shit out of that place. The versions they did of Petty's I Won't Back Down, Cocker's Feelin' Alright (originally done by Traffic), and the Not Fade Away/Bo Diddley medley were unreal. Let me tell you, if you were ever looking for a place to party on a Sunday night, Scruffy Murphy's has to be hands down one of your best options. Inexplicably, I had decided to drive that night. After three beverages, the self-inflicted fun police stepped in and I shut it down. I am an idiot.

Monday night, after The Alfredo Griffins began their second season with a thrilling 1-0 default victory, the team headed over to my buddy Rosco's place for some sweet BBQ action. Again, drank beer all night, but there was so much food going around that it was impossible to get to that good old fashioned wasted state that makes the Canadian long weekend so special. Don't get me wrong, that didn't stop me from riding the Vomit Comet home, but still...

Which brings us to Canada Day. My buddy Sully hosted the first annual Lornie Sullivan Canada Day Horseshoe Tournament, and it started out looking like it would be a pretty wild day of drinking and horseshoes. The one thing that we hadn't planned on (although in retrospec, it should have been the most obvious fate in the world), however, was that the party would be bone dry by about 7pm. I guess with all of the Beer and Liquor stores closed for the holiday, it was impossible to rally together for one of those legendary 6pm keg runs that usually characterizes just about every great afternoon gong show. As a result, we left Sully's around 9:30 with a pretty decent glow, but with speech unslurred and in complete motor control. How incredibly disappointing.

So there you have it. I didn't think that binge drinking in moderation was possible, but apparently, under the right conditions, it can be accomplished. All of the unproductivity of binge drinking and hangovers, without any of that pesky fun that goes along with a good 4-day bender.


I really think we need to band together as a nation to make sure that the next long weekend is filled with funnels, hard liquor, and projectile vomiting, just like this country's forefathers intended.
Posted by Sean McCallum at 4:43 p.m.

Who's the hot chick passed out on the picnic table. Bodacious Ta Ta's!!!!! I never saw her at Sully's