The Second City takes top billing this weekend, as the staff here at SeanMcCallum.com will be hitting up the great city of Chicago for my buddy Foley's stag. It promises to be one of those legendary, debauchery-filled weekends with a game plan that includes blues bars and bleacher seats, and a roll-call of attendees that reads like a murderer's row of noteworthy dotcomrades.

To honour all that the City of Chicago has to offer, we'll be paying tribute to a different famous son (of which there are almost too many to count) everyday here on the blog. 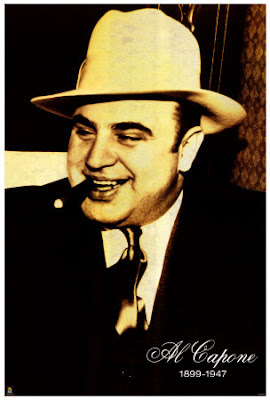 Al Capone was the most popular man in Chicago for the duration of the 1920's. He did more to expand the Chicago vice market than anyone in history, controlling the city's speakeasies, bookie joints, gambling houses, brothels, pony tracks, nightclubs, distilleries, and breweries for the latter half of the decade, earning a reported $100,000,000 a year in the process. He smoked cigars and was an unconscionable womanizer. He showed a wanton and almost gleeful disregard for the law, and his mere "responding to the will of the people" almost single-handedly brought an end to Prohibition. He was simultaneously revered and reviled in the city he owned, and to top it all off, he died of Syphilis while serving time in jail.


If Al Capone isn't the quintessential mascot for a bachelor party in Chicago, I don't know who is.