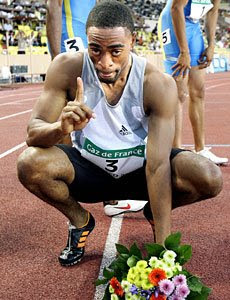 From Fox Sports:
The American Family Association has a strict policy to replace the word "gay" with "homosexual" on its news website - but it created a problem with sprinter Tyson Gay.
The association's computer's auto-corrected the US sprint star's name to Tyson Homosexual.

Here's an extract of an Associated Press story as it ran on the association's OneNewsNow Christian news website:

Tyson Homosexual was a blur in blue, sprinting 100 meters faster than anyone ever has. His time of 9.68 seconds at the U.S. Olympic trials Sunday doesn't count as a world record, because it was run with the help of a too-strong tailwind.

Here's what does matter: Homosexual qualified for his first Summer Games team and served notice he's certainly someone to watch in Beijing.

The embarassing blunder has since been fixed, although it's still visible on the site's search page.

Somewhere out there, Haywood Jablomie, Ivan Joyderpuss, and Wilma Fingerdu are nodding their heads knowingly...
Posted by Sean McCallum at 1:34 p.m.