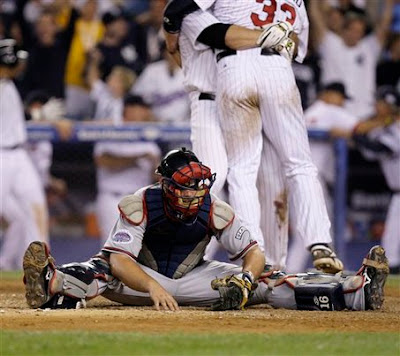 My buddy Browner emailed me this afternoon with an idea on how to prevent the calamity that nearly came to fruition in last night's marathon all star game at Yankee Stadium. That near calamity was the idea of having yet another midsummer classic end in a tie, resulting in not simply another PR disaster, but throwing all of the MLB playoffs into chaos as well.

For those of you who are unfamiliar with what all of this "running out of pitchers" and "having to declare the game a tie" talk, here is a brief summary:

Major League Baseball cannot seem to settle anything these days.
In a bizarre twist to a time-honoured baseball tradition, troubled commissioner Bud Selig suffered yet another humiliating indignity as he was forced to proclaim Tuesday's 73rd MLB All-Star Game a 7-7, 11-inning tie.
The reason?
Both teams ran out of pitchers.

Every team carries a certain number of pitchers, and once a pitcher has been removed from the game, he is not allowed to re-enter. It may be unbelievable to the casual fan, but an all-star roster has as many pitchers as your regular everyday team. And even though no Major League team has run out of pitchers... well... ever (not even when they play two games in the same day!); the managers of the American and National League all-star teams have managed to run out of pitchers twice in the past eight games!!! It's true. Even though they made it so that the all-star game actually counts for something now(home-field advantage in the World Series); a rule that was implemented specifically to ensure that such a debacle never happens again; the same thing almost happened again last night.

And don't get me wrong: watching J.D. Drew and David Wright pitching in the 17th inning of a game that determines home-field advantage in the World Series would have been great for comedy's sake, but I'm not sure how good it would have been for the game of baseball.

(For the record, I stayed up until 1:40 last night, watching every single pitch. It was an unbelievable game, and certainly the best all-star game I can remember having ever watched. And the fact that the game was on the verge of being called a tie yet again by the commissioner gave it a whole new level of intrigue. But that doesn't change the fact that it shouldn't have gotten to the point where the managers were breaking out in acne because they didn't have any other pitchers to throw out there. That should never be happening in any sporting event, let alone in the National Pastime's showcase event at the most famous stadium in the world.)

In any event, my buddy Browner's idea wasn't a bad one. He suggested that each team select 3 future stars pitchers for each team. Each future star would get to take part in the full festivities, but only pitch if the game went to extra innings, explaining that the experience would be good for the young (likely unmarried and/or childless) players, and would in turn solve all of these problems for the managers.

Like I said. Not a bad idea at all, and probably a hell of a lot more likely to happen than my suggestion. Because my suggestion is as follows: have managers stop managing the game like it's a mosquito league consolation championship and all of the 8-year old players will have their feelings hurt if every single last one of them doesn't get a chance to play.

Seriously. What the fuck is up with that?

Since when did a competitive event; particularly one that counts for so much (according to the Boston Globe, MLB teams have a 53% chance of winning when playing at home, and playing at home is one of the most significant advantages in professional sports); become more about getting everyone involved and not hurting anyone's feelings than actually competing and... here's a novel idea: winning?

But that's the way managers in the all-star game have taken to managing in the past twenty years. And the individual managers aren't necessarily to blame for this one. I equate it to the ridiculous trend modern athletes have set when it comes to bringing their toddler children into the dressing room after a championship win (the biggest atrocity against sports since they banned streaking). I'm of the belief that no manager actually wants to manage the game so that every player gets his equal share of playing time (in the same way that most players probably don't actually want their 2 year old daughter in the room with them as they're getting shitfaced and spraying champagne everywhere); but when all of the other managers are doing it, his hand is almost being forced, and he has to follow suit or he'll look like the biggest asshole this side of Charles Comiskey.

Take last night's game for example. It was absolutely indefensible to keep Cliff Lee in for only 2 innings throwing the stuff that he was, and then to have your next four starting pitchers go an inning each (including Harry Leroy III, who threw a total of 9 pitches). The AL deserved to forfeit the game after that debacle of mismanagement. I don't see any logical explanation for why you wouldn't ride your starter for four or five innings, bring in Doc for the next three, and then go to your closers when it comes time to close the game. If the game happens to go to extra innings, you have three other starters (Saunders, Santana, and Duchscherer) itching to get on the bump.

I honestly thought that when they decided to make the game count back in 2003, that the managers would start managing it like a game that actually counted. But I think in light of last night's performance, they obviously don't. Your best players; by definition, the players that give you the best chance to win the game; should be playing at least 7 innings, and I'm all in favour of keeping your elite stars in for the entire game (there's no way that game goes 15 innings if A-Rod, Ichiro, and Manny are in the lineup).

It's just a complete insult to the history of the game to have it managed the way it is these days.

or the NL? Check the box score from that game. The starting pitchers both went 3 innings each. The guys who came in after them went 2 and 3 innings respectively. Carl Yastrzemski won the MVP. He had 6 at bats. I don't think it's any coincidence, then, that that particular game is universally lauded as the greatest all-star game every played. Because it was a game just like every other game, with the players playing to win, and more importantly: with the managers managing to win.

I think Charlie Hustle's quote about his collision with Ray Fosse on that fateful night in 1970 sums it up the best:

"I just want to get to that plate as quickly as I can. Besides, nobody told me they changed it to girls’ softball between third and home."

Somebody needs to tell these managers that the MLB All-Star game hasn't been changed to girls' softball... At least not yet.
Posted by Sean McCallum at 4:50 p.m.

I guess the biggest consideration I can think of that wasn't mentioned was the risk of injury. If you play the best players in the game for 6 or 7 innings, they obviously have a much higher likelihood of getting hurt (especially pitchers). So, if you are the best player in the league, but you happen to play for a shitty team that has zero chance of participating in the World Series, what incentive is there to give 110% and bowl over catchers and dive headfirst and generally play balls out. The answer is there isn't. You may be a hero in the eyes of the fan, but Steinbrenner doesn't pay guys like ARod $25.2 million a year because he's a stand up guy (the man cheats on his wife for God sake). He pays him because of his stats last year. He was a rockstar.

I'm not sure what is wrong with the team with the better regular season record getting home field advantage in the World Series, and considering baseball is a statiscan's wet dream, I'm pretty sure they can come up with some ideas on how to break the tie if the teams have the same record.

But one thing is for damn sure. Tie games in baseball just ain't kosher.

It's just one man's opinion.

Ray Fosse was never the same again but I agree – your first 2 starters can eat up at least 6 innings and then there should be no problem. Tito Francona should know better – especially since it will be him and his Sox that benefit from the home field advantage.