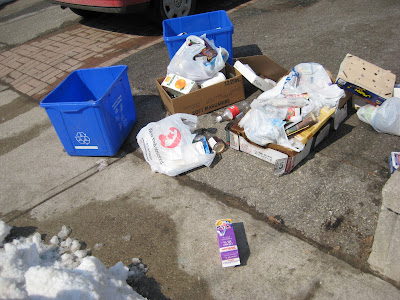 A few months back, I posted a piece concerning the quality of service the people on my street were receiving with regards to garbage and recycling pickup. Despite the fact that most readers simply chalked it up to the fact that I was becoming a grumpy old man in my advancing years, it appears as though I have not been alone in my dissatisfaction with the performance of the Toronto G-force of late.

This article was taken from yesterday's Star, and just for the record, I was not the annonymous Bowden Street emailer:

When an inner-city street is messier after recycling pickup than before the collection crew came along, people get annoyed.
An email arrived last week from a resident of Bowden St., which runs south from Danforth Ave., east of Broadview Ave., that included many photos of the litter left behind last Thursday, after recycling boxes and green bins were put out for curbside pickup.
The photos show green bins and blue boxes scattered along the sidewalk – where they appear to have been carelessly tossed – along with newspapers, cereal boxes, plastic containers, cans and other stuff that should have gone into the truck.
The same email was also sent to city officials.
The sender of the email, who asked not to be named because "I don't want a brick through my window," said Bowden St. is often a trash-strewn mess after pickup, adding he's so fed up with the problem that he decided to send the photos to the city and media.
"It's typical," he said.
"Half of it gets into the truck while the other half ends up on the street. You just have to watch them to see what's going on.
"When they empty the bins, they throw them all over the place. They end up in the hedges.
"It makes the street a disaster."
We were somewhat surprised to hear about it, since we've had so few similar complaints.
On The Fixer's street, recycling and garbage collection is excellent, and it's been our observation that few city employees work harder than the collection crews.
STATUS: We obtained a May 1 email sent to the resident from Rob Orpin, the area director of collections. Orpin agreed that the situation was "unacceptable," adding that crews have been told "this type of workmanship won't be tolerated.
"I will ask the area manager to take the necessary action to prevent this from reocurring."

I should probably point out that ever since I voiced my complaint, the performance of the blue box guys on my street has been nothing short of exemplary, redeeming not only my faith in municipal services, but my pride in calling myself a member of the exalted G-force alumni.

Thanks to Richie for the heads-up.
Posted by Sean McCallum at 3:57 p.m.