Get Out the Salami and Cheese Mama... 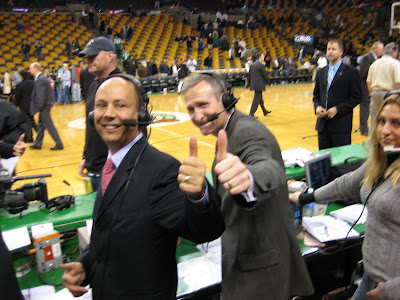 Get out the salami and cheese, Chuck Swirsky’s career with the Toronto Raptors is over.

The team announced Tuesday that Swirsky, who had been the Raptors’ TV play-by-play man for the past seven years, has left the organization to assume the radio role with the Chicago Bulls.

Swirsky was the Raptors’ radio announcer for three years before moving to TV. His signature call for a Raptors victory called for the salami and cheese.

Swirsky previously worked in Chicago as the sports director at WGN radio from 1982-94 and the Raptors said Swirsky’s decision to return to the Windy City was based on personal reasons related to his family.

The Raptors praised Swirsky’s work in a statement released by the Maple Leaf Sports and Entertainment, which owns the NBA franchise.

"There’s lots of good play-by-play guys out there, but only one Chuck Swirsky," Tom Anselmi, MLSE’s executive VP and chief operating officer, was quoted in the statement. "He is a big loss to our organization. His passion for basketball and passion for our fans, makes him one of the game’s great ambassadors. He’s leaving for the right reasons, and that’s to place the needs of his family at the top of his priority list. He leaves with our support, our deepest appreciation and best wishes for the future.

"Swirsky, who also hosted an afternoon radio show on Toronto’s all-sports radio The Fan 590, had recently become a Canadian citizen. He signed a four-year contract extension in 2007.


Raptors basketball will never be the same. No more Onions, baby. No more sick, wicked, and nasty. No more Salami and Cheese.

Even though the Swirsk may have quite possibly been the worst daytime sports talk radio host on the planet (on the Fan 590 1-4), there is no denying his enthusiasm for the Raps and for the City of Toronto. He did a great deal for basketball not only in this city, but in this country, and he will be impossible to replace.