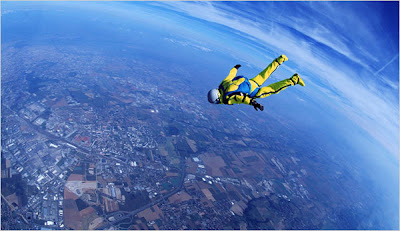 He has spent two decades and nearly $20 million in a quest to fly to the upper reaches of the atmosphere with a helium balloon, just so he can jump back to earth again. Now, Michel Fournier says, he is ready at last.
Depending on the weather, Fournier, a 64-year-old retired French army officer, will attempt what he is calling Le Grand Saut (The Great Leap) on Sunday from the plains of northern Saskatchewan.
He intends to climb into the pressurized gondola of the 650-foot balloon, which resembles a giant jellyfish, and make a two-hour journey to 130,000 feet. At that altitude, almost 25 miles up, Fournier will see both the blackness of space and the curvature of the earth.
Then he plans to step out of the capsule, wearing only a special space suit and a parachute, and plunge in a mere 15 minutes, experiencing weightlessness along the way.
If successful, Fournier will fall longer, farther and faster than anyone in history. Along the way, he can accomplish other firsts, by breaking the sound barrier and records that have stood for nearly 50 years.
“It’s not a question of the world records,” Fournier wrote via e-mail through an interpreter on Friday from his base in North Battleford, Saskatchewan. “What is important are what the results from the jump will bring to the safety of the conquest of space. However, the main question that is being asked today by all scientists is, can a man survive when crossing the sound barrier?”
In the past two weeks, Fournier’s 40-person team has assembled at the launch site, about 90 miles northwest of Saskatoon. The remote Canadian plains were picked after French authorities denied permission because of safety concerns.
Fournier faces plenty of perils. Above 40,000 feet, there is not enough oxygen to breathe in the frigid air. He could experience a fatal embolism. And 12 miles up, should his protective systems fail, his blood could begin to boil because of the air pressure, said Henri Marotte, a professor of physiology at the University of Paris and a member of Fournier’s team.
“If the human body were exposed at very high altitude, the loss of consciousness is very fast, in five seconds,” Marotte said. “Brain damage, in three or four minutes.”
Fournier’s gondola will be sealed, pressurized and equipped with oxygen. He will be in communication with a ground crew on the climb and will be tracked by G.P.S. He will wear a pressure suit and a sealed helmet supplied with oxygen.
“Another problem is decompression sickness,” Marotte said. “You have the same problem with nitrogen as divers who go too quickly from deep to the surface.”
To prevent this, which underwater divers call the bends, Fournier will breathe pure oxygen for two to three hours before liftoff.
Marotte said Fournier would be in free fall for about eight minutes. He would exceed the speed of sound within the first 40 seconds and eventually approach 1,000 miles an hour. His fall would slow at lower altitudes amid increasing wind resistance. His parachute is designed to open at around 5,000 feet.
The gondola will be released from the balloon and is equipped with three parachutes to allow for a safe landing.
Fournier’s jump can set four records: fastest free fall, longest free fall, highest altitude for a human balloon flight and highest parachute jump. The Fédération Aéronautique Internationale, which bills itself as the world’s air-sports organization, sanctions jumps like this.
Fournier has attempted his stunt twice, but technical and weather-related problems foiled the efforts before he left the ground. The most recent attempt, in 2003, failed when his balloon ruptured before takeoff.
Fournier has been preparing physically and mentally for this moment for years, making more than 8,000 jumps and setting a French record from an altitude of more than 39,000 feet, his highest jump to date. By comparison, a standard sky dive is from 12,000 to 13,000 feet.
“I got to say that I’m so excited,” he said in the e-mail message. “It’s my dream coming true. It represents 20 years of work and sacrifices, and today I’m seeing the realizations of all my efforts.”

His quest began in September 1988, when the French space agency selected him to free fall and parachute from near-space. The mission was designed to test the potential for astronauts to escape without a space craft in an emergency. Only two years earlier, NASA’s Challenger shuttle disaster killed seven astronauts.

Fournier was a paratrooper, among other roles in the French army, and was among dozens of candidates subjected to physical and psychological tests before being chosen for the mission. But it never got off the ground; the program folded four months after he was picked to participate.

Yet his resolve only grew, and in 1992, he retired from the military to pursue the project privately. To pay for training and equipment, he has sold his house and most of his belongings. Together with private donations, he has spent almost $20 million.

For two decades, there were few serious competitors. But Steve Truglia, a 45-year-old movie stuntman and a former member of the British Special Forces, said he planned a similar jump over the United States in July.

“My plan is to take that record as soon as possible,” Truglia, a native of London, said by phone recently. “Whatever he does I can beat.”

Truglia holds a British record for an underwater free dive on a single breath (249 feet). A jump from near-space and a chance to reach supersonic speeds represent something more.

“I don’t think there’s a bigger stunt that I’m going to look for after this,” Truglia said. “I can’t think of a bigger stunt, other than perhaps trying to re-enter the earth’s atmosphere with just your body, and I think we’re a long way away from that.”

The highest previous recorded jump from a balloon was performed in 1960 by Joe Kittinger, a United States Air Force test pilot who leaped from 102,800 feet and exceeded 600 miles per hour before opening his parachute at 18,000 feet. He was down in less than 14 minutes.

Reached by phone last week at his home outside Orlando, Fla., Kittinger, 79, said he was surprised his record had stood for so long.

Kittinger is contacted regularly by others interested in breaking his record. “There’s a whole bunch of them out there that are just like Fournier and just like the guy in England,” he said. “Most of them don’t have the money to do it.”

Some say that with scientific information already gathered from this kind of jump, there is little benefit beyond learning what happens to the human body at supersonic speeds. Others suggest that the leap could generate serious interest in space travel, the way the Wright brothers helped inspire aeronautics.

“A front-row seat of space,” Truglia said. “I think that will appeal to a certain sector of society, people that want to adventure and live on the edge.”

But Kittinger expressed skepticism about tourists attempting to cope at such high altitude.
“It was definitely beautiful, but it’s also hostile,” he said. His right hand swelled to twice its normal size when his glove failed to pressurize properly.

From those lonely heights, the speedy return trip was a relief.

“Yes, it was nice to be headed back to earth, because it’s an environment that we can live in,” Kittinger said. “And it’s a beautiful planet, really.”


There is a very good chance that by the time you read this, Michel Fournier will be dead. I remember reading about this guy in The New Yorker about nine months ago, and that particular article went into excruciating detail to describe exactly what happens to your body at 130,000 feet. Let's just say that it isn't pretty. I've been at close to 18,000 feet, and it damn near killed me. So when you factor in that Fournier is 64 years old, I don't think he lives to tell the tale. Just one man's opinion.

By the way, I think that Truglia guy has to be the world's biggest A-hole for wanting to steal the old man's thunder.
Posted by Sean McCallum at 1:47 a.m.

postponed until tomorrow! i hope he lives, he's devoted 20 years of his life to this. If he fails, god bless him for trying something absolutely insane.

hey david, here is that site i was talking about (that I own) where i made extra cash this summer (by scamming people), it's pretty cool (if you like viruses)... anyway (I'm lame),
-spam bot

"It is expected to take Fournier 15 minutes just to come down, screaming through thin air at 932 mph an hour (1,500 kilometers per hour) — 1.7 times the speed of sound — smashing through the sound barrier, shock waves buffeting his body, before finally deploying his chute about 6,000 meters (3.75 miles) above the prairie wheat fields."

I'm assuming the jumper's ability to reach supersonic speeds has something to do with the thin air he'll be hurtling through, but I don't claim for a second to know the science behind it. Just passing on the info.

Sorry for my bad english. Thank you so much for your good post. Your post helped me in my college assignment, If you can provide me more details please email me.