Sam Mitchell Out; Jay Triano In as Raps Head Coach 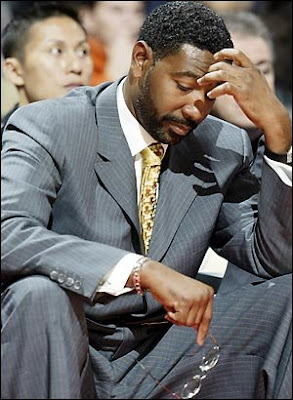 From Marc Stein at ESPN.com

The Toronto Raptors have fired coach Sam Mitchell after Wednesday's 39-point loss in Denver.
"This is a difficult but necessary step the franchise must take," Raptors general manager Bryan Colangelo. "We appreciate all that Sam has done for the organization, applaud him for his successes and wish him nothing but the best with his future in basketball."
Mitchell will be replaced by Raptors assistant coach Jay Triano on an interim basis. He is in his seventh season as a Raptors assistant. A native of Niagara Falls, Triano coached the Canadian men's national team from 1998-2004, posting a 52-42 record.
Triano's first game as head coach will come Friday when the Raptors visit Utah to play the Jazz.
Expected to challenge the Celtics in the Atlantic Division this season, Toronto is 8-9 and already eight games behind Boston.
Mitchell is in his fifth season with the Raptors, posting a 156-189 record. He was named the coach of the year in 2006-07 after guiding Toronto to a 47-35 record and a playoff berth. The Raptors regressed to 41-41 last season but still made the playoffs, losing in the first round.

Gut reaction to the Sam Mitchell firing is that it's sad to see Sam go. He was one of the more likable coaches in recent memory here in Toronto, and the plain truth is there has never been a better performance on the airwaves than whenever he'd join Landry and Stellick in the morning, particularly when the Raps were mid-West-Coast swing. He has helped to turn Chris Bosh into a legitimate superstar, and had a huge hand in helping to make Toronto Raptors Basketball relevant in this city again.
But the fact is, Sam was overmatched as a head coach. The Raps were losing too many close games (last night's debacle notwithstanding), and have been treading water for the past year and a half.
I genuinely like Sam as a guy, and found his honesty completely refreshing, but it was probably time for him to go. Here's hoping he lands on his feet somewhere.

As for Jay Triano, you have to love the fact that the Niagara Falls native is getting a shot in the NBA. It will be interesting to see how the Raps respond to taking direction from a good Canadian lad. Only time will tell, but expect a huge ovation for Triano come Sunday afternoon.
Posted by Sean McCallum at 5:40 p.m.

Sheen,
I appologize that this has nothing to do with Sam Mitchell (although he will be missed) but I just wanted to know your feelings on what's going on with the Canadian government? I know you had some strong feeling regarding the American election; what do you think about the most exciting times in Canadian politics since Tredeau's "Just watch me!" speech.

The raps just aren't that good.

Sam is a class act.

And it's probably true: the Raps just aren't all that good.

its about time we had a Canadian coach in the NBA. We invented the game.