The Bills in Toronto 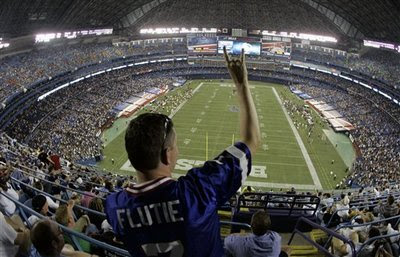 My buddy Dinner text messaged me shortly after leaving the Rogers Centre Sunday night. His message read: "What a fucking joke that was."
My sentiment exactly.
Even if you disregard the fact that today's effort was one of the most abominable displays of football this oft-abysmal franchise has ever put forth; even if you manage to erase the memory of thousands of Miami Dolphins fans chanting "Let's-Go Dol-Fins!" at a Buffalo Bills home game; even if you were able to somehow convince yourself that you wouldn't rather see Rob Johnson's corpse trot out there than J.P. Losman, or that you didn't just witness Ricky Williams play better for the Miami Dolphins than he ever did in his time here with the Argos; forgetting all of those unforgettable, nightmarish facts, that entire production was still a fucking joke.

Just read some of these quotes:

"We went out and saw the people in aqua and orange and it made a pretty big difference. You don't feel like you're playing an away game and you're excited for the support."
- Ronnie Brown, Miami Dolphins

"It wasn't clear who the home team was and that's nice for us."
- Ricky Williams, Miami Dolphins

"It felt like we were on the road"
- Jason Peters, Buffalo Bills

"It was cool, it was fun (playing in Toronto) but Buffalo fans are a lot more rowdy. We could have used that rowdiness today."
- Marcus Stroud, Buffalo Bills

I'm not sure how anyone could have possibly expected anything other than the worst crowd in the history of professional football, in light of the fact that ticket prices were so disgustingly exorbitant (ranging from $115.00 to $575.00... $575.00 for the chance to watch J.P. Losman!) that every semblance of a true football fan had been priced out about $300 ago. That crowd sounded more like the platinum section of a Tuesday night Leafs game against the Florida Panthers than it did the boisterously rowdy throng that turned the Monday nighter three weeks ago into one of the most enjoyable sporting events in recent memory, the inevitable heartbreaking finish notwithstanding.
So it looks good on the organizers that the game didn't sell out. Those thousands of empty seats were a gigantic "go fuck yourself" to the corporate whores who were willing to sacrilegiously defiled a Bills-Fins December home game by jacking up the ticket prices to the point that all of the true fans decided they'd rather stay home than be willingly plundered by a company whose 2008 Q3 profits eclipsed $495 million.

Ever since the Bills in Toronto Series was announced back in January, there has been endless speculation about an iminent move of the franchise to Toronto. I listen to Buffalo sports radio every now and then (maybe the most depressing thing in the world), and the paranoia amongst the good people of Buffalo is palpable. And for good reason. Because I don't doubt for a second that this city is capable of supporting an NFL franchise (at $75 per ticket; not $245). But as a Bills fan who lives ten minutes from the stadium they'd be playing at were they ever to move to Toronto, that's the last thing in the world I'd ever want to see.
The best thing about being a Bills fan (there are few positives, so bear with me) is getting on a bus first thing on a Sunday morning with a bunch of buddies and heading down to Ralph Wilson Stadium. The party on the way down is better than the game itself. The party in the parking lot before the game is better than the game itself. The party in the parking lot after the game is better than the game itself. If the team were to ever relocate to Toronto, all of those glorious elements of the Buffalo Bills fan experience would be lost forever. Because we have laws which forbid this type of partying. And because the kinds of people who are willing to pay $200 for a ticket are not the same kinds of people who begin shotgunning Keystone Lights at 8:00 on a Sunday morning.
And make no mistake: Toronto will never be able to duplicate an Orchard Park tailgate party. I mean, did you see any of that "tailgate action" in Toronto today? It was an absolute joke. Paying $6 for a can of Budweiser inside a corporate tent with heaters and flatscreen TVs is about as close to the real thing as wanking to the bra section in a Sears catalogue is.
So please. People of Toronto. Do us all a favour. Do as you did today. Continue to make us proud. Refuse to be gouged by the most offensively priced tickets I've ever come across (at an average price of $183.00 per ticket, fans were paying roughly $14.00 per completed pass by J.P.). Ensure the seats are left empty. Keep getting drowned out by the visiting team's fans. Stay sober enough so as to have absolutely no influence on the outcome of the game, upholding that morgue-like atmosphere we were treated to this afternoon. And most importantly, continue to give the Bills in Toronto Series people exactly what they deserve.
That way, we'll be sure to keep the Buffalo Bills exactly where they belong: in Buffalo, NY.
Posted by Sean McCallum at 10:02 p.m.

I just got chills.

not bad dinner. but mr. miller has my eternal vote.

(look for the camel @ the end)

Yes, "fan" is short for "fanatic" which my on-line dictionary defines as "A person marked or motivated by an extreme, unreasoning enthusiasm, as for a cause." I think you qualify. Also, I remember seeing you somewhere wearing TML apparel, apparently by choice, and recently. I guess you gotta believe in somethin'!!

Well said, particularly the shotgunning of the keystone light!!