Epilogue to the Prorogue 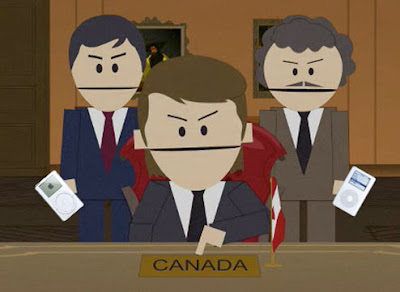 To this point, I've been holding off on commenting on the current state of the Canadian Federal Government because I wanted to see how things shook out before putting my opinion on the record. There was a pretty epic thread of emails exchanged between me and a few of my politically-informed correspondants which I considered printing here in its entirety, but needless to say, things have changed a great deal in the past seven days: non-violent coup d'etats; Stephan Dion as a potential Prime Minister (shuddering); learning the name of the Governor General and that, contrary to what they teach you in 8th grade Canadian politics, that that Governor General actually does serve a pupose; the emergence of the term prorogue into the mainstream lexicon, making it a dark horse in the word-of-the-year sweepstakes... Oh, how far we've com in a week.

I should begin by stating the obvious: that almost without exception, I'm always in favour of a more progressive, left-leaning government.
But with that being said, what we as Canadians were faced with last week was probably the wrong way of going about getting that more progressive, left leaning government.
First and foremost, the idea of Stephan Dion back-dooring his way into the Prime Minister's seat less than six weeks after having had his ass handed to him in the federal election (under his leadership, the Liberal Party suffered the worst defeat in the party's 141 year history) was probably sickening for even the most staunch of Liberal supporters. There are simply no circumstances under which having Dion lead this country is justifiable. Fortunately for everyone involved, this absurd scenario has been taken care of in the interim.
The second point of the contention is the idea of having two of Canada's prominent political parties getting into bed with the Bloc Quebecois. I don't for a second claim to be an expert on the sovereignty movement in Quebec, but what I do know is that granting an inordinate amount of power to a party whose stated objective is to separate from the rest of Canada is never a good idea. It seems like far too slippery slope to try to walk, and I just can't see the end results being worth the risk of having Quebec ultimately break away from this great country.
But even with those two obvious detractors in mind (one having since been rectified), I still think that, by and large, the majority of Canadians are somewhat confused as to exactly what is transpiring in their government. And you need look no further than the slew of "Canadians For Democracy" emails and Facebook goups currently circulating. To me, this is one of those things that people are simply signing up for because, hey, who isn't for democracy? I really wonder whether or not most people signing these petitions are even aware that the "Save our Democracy" angle is little more than a clever spin tactic by the Conservative Party.
The way the Conservatives have the argument framed is that Stephen Harper has been elected Prime Minister, and that replacing him with a coalition and that coalition's leader would be "undemocratic". But the plain truth of it is, Stephen Harper wasn't so much elected Prime Minister as his party simply won 38% of the eligible seats, and Harper just happened to be the leader of the party. Because if there's one thing we've come to learn as Canadians, it is that our Prime Minister is basically interchangeable. And I didn't see anyone passing around any "Save Our Democracy!" petitions when Brian Mulrooney handed the P.M.'s seat over to Kim Campbell.
And when you get right down to it, the elected opposition voting down a policy or budget proposed by the elected minority leadership is the very essence of democracy. This mish-mash of left-leaning leaders - the very leaders that 62% of this country voted for (the multiple left-minded parties who split that 62% of the vote and allowed the Conservatives to come to power in the first place) - are doing precisely what they were voted in to do. They are representing the best interests of their country. The majority of these democratically elected officials don't agree with what the minority leadeship is doing, so they are voting against it. They are keeping that minority in check. They are keeping them honest. Isn't that precisely what the parliamentary system was designed to do?
As for coming together as a formal coalition and usurping power, I really feel like this should be the worst-case scenario for the left-leaning parties. With Stephan Dion, you got the feeling that he might be forming this coalition as a way of obtaining power. But now that Michael Ignatieff has been appointed leader of the Liberal Party, you really get the feeling that he has the best interests of the country in mind. He seems to have a much firmer grasp on reality and the daunting task at hand.
It was Ignatieff who famously said: "coalition if necessary, but not necessarily coaltion." He sees the very real threat of a coalition government as a means of forcing the Conservatives into cooperating with the rest of the democratically elected officials - the so-called "62% majority" - and what they envision for this country. As Ignatieff said:
"The prime minister of Canada must understand that I'm very serious, that I plan to vote against his government if the budget is not in the interests of Canada and in the interests of Canadians and does not deal with the crisis. He's got to walk back down the hill for the sake of Canada."
To me, this type of co-operation; these checks and balances; this means of keeping-someone-honest and looking out for the best interests of everyone; are exactly what living in a democracy is all about. Things might not get accomplished as quickly or as efficiently as they would if there were a majority party in power, but the things that do get done will be truly representative of what the population wants and needs. There's solace and reassurance in that fact.

But as has been mentioned in this space before, I truly believe that this entire fiasco - this borderline national embarassment (this Daily Show clip is one of the all-time pieces of comedy at Canada's expense) - could have been avoided were we to implement some basic electoral reform.
To me, it seems absurd than in a country with five prominent political parties, that we continue to base our elections on the first-past-the-post model: the "winner-takes-all" system in which a single winner is chosen in a given constituency by having more votes than any other individual representative, regardless of whether or not that winner gains an absolute majority of votes. That's how, in the Oakville riding, Terence Young (Conservative) gets elected despite the fact that the majority of the votes (53%) went to people who would probably choose a Conservative Representative last were they to rank the four eligble candidates according to their political convictions.
In a two round voting system, however, you don't get any of these split-vote or strategic voting scenarios.
Taken from Wikipedia:
The two-round system (also known as the second ballot or runoff voting) is a voting system used to elect a single winner. Under runoff voting, the voter simply casts a single vote for their favorite candidate. However, if no candidate receives an absolute majority of votes, then all candidates, except the two with the most votes, are eliminated, and a second round of voting occurs.
It is in this second round of voting that people will choose the candidate that goes to parliament to represent them. It is only with this two round system that you get a true representation of what the majority truly desires, with a winner being voted in based on broad ideals as opposed to political semantics (if a candidate receives more than 50% of the vote in the first round, there is no need for a second round).
(For a good example of how the two-round system works, check out this brief summary of the Peruvian General Election of 2006. It is a perfect example of what the two-round system is designed to accomplish.)

Were this two-round system to have been in place for October's Federal Election, there would be no debating the legitimacy of "the 62% majority". The fact is, if that 62% majority actually did see things similarly and consequently voted in the eligible left-leaning party in their riding, we would almost certainly have a majority government in power, and the term "prorogue" would remain a footnote in the Oxford English Dictionary's online database, which is probably where it should have been relegated all along.
Posted by Sean McCallum at 6:48 p.m.

In fairness, the Bloc was created as a combination of both Conservative and Liberal members of Parliment, and by all accounts, remains relatively evenly divided. If those who voted for the Bloc were given the choice between the Liberals and the Conservatives, only 22% (11 of the 49 seats) would have needed to vote Conservative to get a majority government. So, I think it is a little simplistic to say that 38% of the Country was Conservative, and 62% is not.

Plus, based on the amount on infighting between staffers in the Liberal and NDP parties alone, I would say it is far to assume that more than one or two voters (and MPs for that matter) have been embarassed by the ghastly manner on which this 'coup' was handled. Plus, in the last election, a lot of the Green Party's policies were more conservative than the Conservative party's.

Not to mention there are a lot of fairly right wing Liberals, including Ignatieff, who wrote on book on why toturing terrorists is a good idea.

All I'm saying is that it isn't exactly cut and dry. In hindsight, if people knew before the election that they had to choose between a majority government, or a shitshow between three unorganized parties with different ideologies, led by an incompentant buffoon, maybe those 11 seats wouldn't have been too far out of reach.

And lastly, cut from Wikipedia:

In a speech in front of his supporters following the election, BQ leader Gilles Duceppe claimed to have achieved his objectives, adding: "without the Bloc Québécois tonight, Mr. Harper would have formed a majority government".

The simple fact of the matter is that without splitting the leftist vote in each riding, you don't have 143 Conservative seats. In fact, the most likely outcome in a two-round system is a Liberal majority. And this outcome is most likely for the same reasons that the idea of a coalition is even entertained in the first place: because there are more progressive, left-minded people in Canada than there are Conservatives.