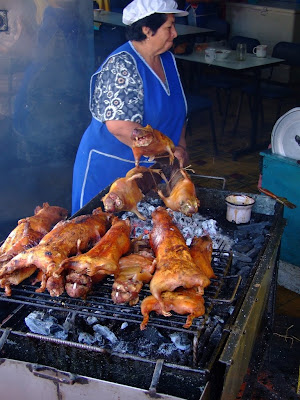 From the Associated Press
LIMA, Peru - Are hard times threatening your Christmas dinner? Well then, Peru has the answer: guinea pig.

Officials in the coastal Peruvian province of Callao on Monday hailed the Andean rodent as a low-cost, low-fat alternative to a traditional turkey or roast pork Christmas dinner.
Guinea pigs can feed seven or eight for about C$4, Callao official Mario Sanguinity told Associated Press Television.
"The idea is to give the people a tasty, economical option," he said.
The presentation included a live guinea pig dressed as Santa Claus and eight of its comrades laid out fried, broiled and roasted in traditional dishes from different regions of Peru.
Callao resident Silvia Carazas said she plans to make the switch to guinea pig at Christmas.

"The animal is rich in protein and has zero cholesterol as well, very important for those of us looking to watch our weight," she said.
The tiny cuts of white meat are often compared to rabbit and dark chicken. Called "cuy" in Peru, guinea pig is a stable source of income for farmers and holds an elevated place in Andean folklore.
A painting of the Last Supper hanging in the principal cathedral of the ancient Inca capital of Cuzco depicts Christ and the 12 disciples dining on guinea pig.

Let me begin by saying that I'm all in favour of cost-cutting this Christmas. Just about everyone I know is receiving a homemade (read: lame) present from me because I'm completely broke. But is sacrificing the turkey in favour of this Peruvian delicacy taking the economizing too far? I guess it depends on where you live. Because if you're spending Christmas up in the wilds of Dornoch, ON, where the turkeys roam wild and free, you should have no problem getting your hands on one in time for Christmas dinner.
But as we well know, not everyone is blessed with an unlimited supply of Meleagris, to say nothing of the father with the itchy trigger finger. So I'm on board with the cuy. I was kind of debating how humane this practice was, considering that the library I used to go to as a kid had a pet Guinea Pig that we used to feed and take care of, and I was having all of these vivid memories of the cute little squeaking noises it used to make whenever it would drink out of its water bottle... But the image of the Guinea Pig dressed like Santa Claus and frollicking amongst eight of his fried and char-broiled friends was enough to convince me that these rodents are actually into it. They love the idea of getting in on the Christmas action.
Being against Cuy at Christmas would be depriving Guinea Pigs the opportunity of fulfilling their Christmas destiny. And I'll be damned if I'm going to be the one to keep someone's dream from coming true this Christmas.
So I'm all in. This year, it's Cuy for Christmas, and Chicha at New Year's! 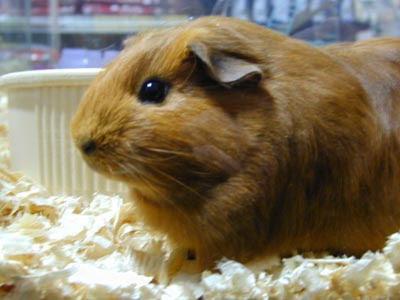 My new year's resolution is to save the poor guinea pigs!!

your Dad is a wildman!