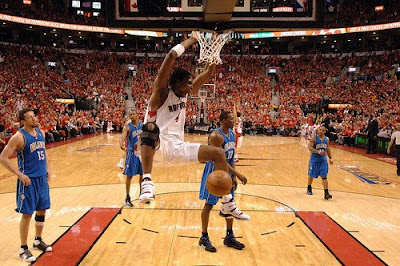 We were able to score four centre court seats (second last row) for last night's game, so my buddy's Foley, Flats, and DT (my girlfriend's dad) headed down for some roundball action and multiple Delgados at the ACC. Here are some quick thoughts on the Raps first home playoff game of the year:

- I'm still not a fan of the colour-coded T-shirt giveaway. I'll take the free shirt any day of the week (even though I'm pretty sure the guy sitting behind me stole mine and wrapped it around his head), but I think the novelty has long-since worn off. Plus, why do they have to put some stupid slogan on the shirts? Why can't they just give you red shirts that say "Raptors" on them? I guess because they don't want you to ever wear them again.

- After a few pre-game beverages at The Loose Moose, the Delgados were going down like nobody's business, and I don't think the four of us were alone in this endeavour. Believe me when I say that the mass imbibing a great deal to do with the abnormally raucous nature of the crowd. I've always believed that if an organization wanted to truly give their team a home court advantage in the playoffs, all they would ever need to do would be to offer $2 beers like they do on Thursday nights in Nashville. I'm telling you, if we could get as vocal as we did at $40 a round, imagine what that place would be like at two bucks a pop: it would probably feel a little like this.

- Another huge reason for the great Raptors crowds is the demographic of Raptors fans. The difference between a Raptors playoff crowd and a Leafs playoff crowd (insert joke here) never ceases to amaze me. The crowd at a Leaf game is almost exclusively white, middle aged, and wealthy. The Raps fans couldn't be more opposite. I would love for MLSE to do a study on the mean average age and annual income of Leafs vs. Raps crowds. My guess is that the Leafs crowd would come in around 48 yrs and $120,000, while the average Raps fan would probably be in the neighbourhood of 26 yrs and $45,000. Is it any coincidence that the players actually get fired up to play in front of that rabid a crowd?
(Another note on the demographic of Raps fans: my girlfriend's dad lives in a small town in Southwestern Ontario where there is literally one family of visible minorities. So needless to say, he was blown away by the fact that this particular crowd was filled with every conceivable race on the planet. The entire row behind us was a group of teenaged East Indian kids, and the group of us were going to them for high fives all game long. After the game, it was all DT could talk about. He was just astounded by how diverse a crowd it was. I'm telling you, there's no team in Toronto that even comes close to the Raps in terms of representing this city's cultural demographic, and it makes for a beautiful fan experience.)

- Two dudes showed up in our section (321) about halfway through the first quarter, and one of them was wearing a Magic jersey. I've never seen a Toronto crowd go after an opposing team's fan the way these guys in our section did. It honestly reminded me of the time I was in Philly and got a beer poured on my head for singing the Canadian anthem. That's the kind of hostile environment you can be proud of. In any event, after about 5 minutes of razzing, they actually convinced this kid to put on the red Raptors giveaway T-shirt overtop of his Magic jersey! I'd never seen anything like it. Honestly, what kind of a fan sells out his team after only 5 minutes of abuse? There wasn't even any kind of a threat of violence! I think that pretty much tells you all you need to know about the nature of Orlando Magic fans.
(As my buddy Flats pointed out, the poor kid probably got that Shaq jersey when he was a kid and didn't even realize that the Raps were playing the Magic in this series. It was probably the only jersey he owns, so he just wore it to the game without giving it a second thought... But still, you have to stand your ground a little bit, don't you?)

- The spontaneous chant of "HOWWW-WAAAAARRRRRD!!!! HOWWW-WAAAAARRRRRD!!!!" when Dwight Howard got to the charity stripe in the second quarter was one of the greatest things I've ever been a part of, and when he missed both free throws, we were giddily moshing in celebration in our seats. I was hoping he got to the stripe 20 times that game, just so we could give him the business all night long. There are few things better in sports than when a crowd actually manages to alter the outcome of a game, and there is no doubt that the Raps fans got into Superman's dome last night.

- The best part about sitting in the second last row with a group of rowdy teenagers behind you? I didn't sit down the entire game. If I had my way, every sporting event would be attended in this fashion.

- I don't care how well T.J. Ford played last night (and you could easily argue that 21 points with only 3 assists is definitely NOT what you want from your point guard; and the truth is, if his shot isn't falling {as it often isn't}, T.J. can be an unmitigated disaster), Jose Calderon has to be the starting point guard on this team. If this video doesn't tell you about how the Toronto fans feel about him, nothing will (I love that Jack loves it).

- Chris Bosh was invisible in the first half, and the Raps had almost no inside presence at all for the duration of the game. There was one point in the second half where they didn't have a single guy inside the 3-point line when a shot went up. That strategy might work against this Magic team, and it might work when you're shooting close to 50%, but there is no way this team will be able to make any noise in the playoffs if they don't get tougher inside. Bring back Oak. Bring back Oliver Miller. Hell, sign Big Country Reeves if you can... But they need to do something if they ever want to contend, even if that "something" means hooking Andrea Bargnani up with Greg Anderson in the offseason.

- Finally, a note on the urinals at the ACC. I noticed for the first time that each urinal has a ledge above it, presumably to place your beverage whilst relieving yourself. Now, I was never really one to bring my beer into the stinking pisser with me anyway, because as far as I know, you generally don't need to worry about having anyone put ruffies in your drink at a basketball game, but I can see where guys might want to bring their beer with them. To each his own, I guess. But the thing about these particular ledges is that they're HUGE. I'm telling you, these ledges are a good 18 inches long and 6 inches wide, which of course begs the question: exactly what do they expect you to bring into the pisser with you?
How many guys are bringing four beers into the bathroom with them? I'll tell you how many: zero. And I know this because they will only sell you two beers at a time. And I know for a fact that nobody in their right mind is gonna decide to line up for nachos and hot dogs, and then bring them into the bathroom with them. It's absolutely ridiculous, the size of these ledges.
The reason I noticed this last night, and the reason I bring it up now, of course, is because I took a header off one of these ledges between the 3rd and 4th quarters.
There I was, just standing there minding my own business, six Delgados deep... I have no idea why guys feel compelled to look at it while in the act, but we do... so I decided to look down, you know, to see how everything was unfolding, and in the process smashed my head right on this fucking stainless steel ledge... It didn't exactly hurt, but when you're in a bathroom full of drunk guys lined up out the door, they tend to take note when you smash your grill off the piss ledge.
I will be filling out a formal petition to ensure that the good people at the ACC reduce the size of the piss ledges above the urinals in the 300 level... you know... all in the name of safety.

Looking forward to game four this Saturday...
Posted by Sean McCallum at 12:52 a.m.

Wide awake, reading the paper on the subway, and I missed my stop.... by two stations.

Got out, went up the stairs... there was a train sitting there, justabout to leave, so I jumped on in the nick of time. And currently findmyself standing at Rosedale station. Which is lovely (and empty), butnot any closer to the direction of the office.

No more drinking during the week for me.