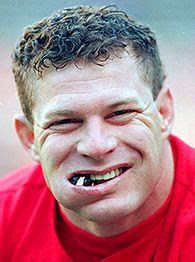 When my buddy Foley and I took Lenny Dykstra with the fourth overall selection in the first and only fantasy baseball draft I've ever had the pleasure of taking part in back in 1994 (in the years before the advent of the internet, when our poor commissioner, Phatty, would have to compile our weekly statistics by going through the nightly boxscores one by one), we could have never imagined that Nails would become the most successful former athlete this side of Magic Johnson. Not only would this fact have been considered improbable, but I'd be willing to venture that if it were possible to bet on this sort of thing, the only guy on that '93 Phillies team that would have offered longer odds would have been Mitch "Wild Thing" Williams (thrown out of a Catholic Youth League basketball game last month for berating a referee). Hell, even ol' one-nut Kruk would have been a more probable bet to succeed after his playing days.

But against all odds, Lenny Dykstra has become a financial powerhouse. Not only is he a tenacious and ridiculously successful day-trader, and not only does he have one of the best ideas for a magazine I've ever heard of (a magazine appealing exclusively to professional athletes that will not only have articles written about the kinds of things they're interested in {Kyle Korver on video games, Keith Hernandez as food critic}, but it will also aim teach them how to succeed in their lives after sports), but he lives in Wayne Gretzky's old house! Honestly, in a million years, would you have ever imagined the Wayner selling his place to Nails? And Wayne and Lenny are friends and business associates today! It's surreal, the whole thing.

Anyway, Dykstra carries this entire article with his inferiority complex lifestyle and life story, his baseball analogies for the real world, his honesty and candour, his infectious energy, and his abominable use of the English language. It really is one of the best and most unbelievable reads I've come across in a long time, and you really have to read this piece to believe it. It's taken from this week's New Yorker:


Needless to say, the junk food and lack of a workout regime has caught up with Lenny Dykstra. I almost couldn't believe I was looking at the same guy who stole 37 bases in 1993.
Posted by Sean McCallum at 6:10 p.m.