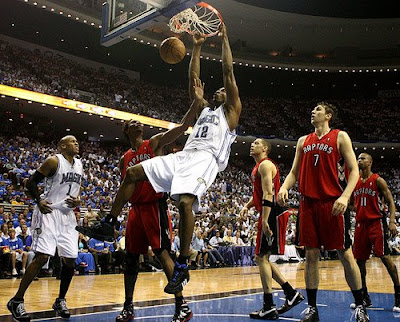 I guess the Raps figured that since it was such a nice day in Toronto this afternoon, they wouldn't bother pestering their fans with anything resembling a competitive basketball game, allowing us to head outside to enjoy the sunshine about halfway through the first quarter. Because make no mistake about it: when Keyon Dooling hit back-to-back 3s in the last two minutes of the first quarter, this game was over.

(For those of you that hate sports - and I know there are more than a few - feel free to tune in to this great episode of This American Life, where Alex Blumberg recounts the facsinating life story of Jerry Springer {fast forward to the 3:10 mark}. The fact that Springer was, at one point in time, arguably the most promising politician in the U.S. might strike you as improbable. But what is perhaps even more improbable is not only the fact that he is considering getting back into the political ring, but that by the end of this 35-minute segment, you'll find yourself hoping he does. His speech about the Statue of Liberty is one of the most touching I've ever heard... Back to the mindless sports rambling.)

Here are a few other random thoughts about the Game 1 beatdown:

- I hate the idea of giving the crowd colour-coded T-shirts. Not only does it look ridiculous (particularly when one physical half of the arena gets white, while the other half gets blue), but it completely diminishes what the Jets fans in Winnipeg used to pull off on their will and dedication alone. I'm really hoping the Raps don't go down this road again on Thursday. Let fans wear whatever it is they're going to wear. If we wanted a sea of red, we'd all go out and buy Nesterovic jerseys and do it ourselves.

- I'm having a hard time coming to grips with the fact that the Magic play in Amway Arena... Seriously? Amway? Everytime I hear the word "Amway", all I can think of is that classic scene from GO where William Fitchner tries to get the kids into selling "Confederated Products", and then gets all offended when they call it Amway... Wouldn't playing in a place called Amway Arena be a little bit like playing in the Yugo Coliseum?

- The girl sitting next to Chuck and Leo at the broadcast table looked like Patti Scialfa, and I have no idea who she was.

- Dwight Howard is an absolute beast, and if he continues to play the way he did today (25 pts, 22 boards, 5 blocks {4 blks in the first quarter!}), this will be a pretty short series. Comparing him to fellow first-pick-overall Andrea Bargnani is only slightly depressing.

- What is even more depressing is when you think about what kind of a team the Raps could be trotting out there every night if they'd never hired Rob Babcock as their GM. Or even if they'd hired Babcock, but didn't let him near the war room on draft day. Because if they draft according to every single scouting report, player ranking system, or mock draft on the planet and leave nothing to the incapabilities of Robby B and his proclivity for going 'off the board', they take Andre Iguodala instead of Hoffa Araujo, and they take Danny Granger ahead of Joey Graham (the two picks immediately following Babcock's misadventures)... Go ahead and compare the numbers on those players, provided that there are no sharp objects within reach... Ugh.

And if there are no blunt objects in the room, feel free to peruse this little recap. If there is a worse 365 days (in the year between the '04 and '05 drafts) in the history of professional sports, I'd like to know what they are.

- The one silver lining around this otherwise dismal cloud is that this particular blowout should, in theory, reduce the prices some of the people are asking for tickets on Craigslist. Four of us are supposed to be hitting up Thursday night's game, and this lacklustre performance should go a long way in ensureing there is ample money left over for a few Delgados.

Thanks to Micah for the Springer clip.