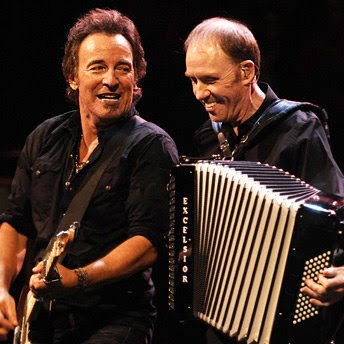 E Street Band member Danny Federici dies at 58
NEW YORK (AP) — Danny Federici, the longtime keyboard player for Bruce Springsteen whose stylish work helped define the E Street Band's sound on hits from "Hungry Heart" through "The Rising," died Thursday. He was 58.
Federici, who had battled melanoma for three years, died at Memorial Sloan-Kettering Cancer Center in New York. News of his death was posted late Thursday on Springsteen's official Web site.
He last performed with Springsteen and the band last month, appearing during portions of a March 20 show in Indianapolis.
"Danny and I worked together for 40 years — he was the most wonderfully fluid keyboard player and a pure natural musician. I loved him very much ... we grew up together," Springsteen said in a statement posted on his Web site.
Springsteen concerts scheduled for Friday in Fort Lauderdale, Fla., and Saturday in Orlando were postponed.
Federici was born in Flemington, N.J., a long car ride from the Jersey shore haunts where he first met kindred musical spirit Springsteen in the late 1960s. The pair often jammed at the Upstage Club in Asbury Park, N.J., a now-defunct after-hours club that hosted the best musicians in the state.
It was Federici, along with original E Street Band drummer Vini Lopez, who first invited Springsteen to join their band.
By 1969, the self-effacing Federici — often introduced in concert by Springsteen as "Phantom Dan" — was playing with the Boss in a band called Child. Over the years, Federici joined his friend in acclaimed shore bands Steel Mill, Dr. Zoom and the Sonic Boom and the Bruce Springsteen Band.
Federici became a stalwart in the E Street Band as Springsteen rocketed from the boardwalk to international stardom. Springsteen split from the E Streeters in the late '80s, but they reunited for a hugely successful tour in 1999.
"Bruce has been supportive throughout my life," Federici said in a recent interview with Backstreets magazine. "I've had my ups and downs, and I've certainly given him a run for his money, and he's always been there for me."
Federici played accordion on the wistful "4th Of July, Asbury Park (Sandy)" from Springsteen's second album, and his organ solo was a highlight of Springsteen's first top 10 hit, "Hungry Heart." His organ coda on the 9/11-inspired Springsteen song "You're Missing" provided one of the more heart-wrenching moments on "The Rising" in 2002.
In a band with larger-than-life characters such as saxophonist Clarence Clemons and bandana-wrapped guitarist "Little" Steven Van Zandt, Federici was content to play in his familiar position to the side of the stage. But his playing was as vital to Springsteen's live show as any instrument in the band.
Federici released a pair of solo albums that veered from the E Street sound and into soft jazz. Bandmates Nils Lofgren on guitar and Garry Tallent on bass joined Federici on his 1997 debut, "Flemington." In 2005, Federici released its follow-up, "Out of a Dream."
Federici had taken a leave of absence during the band's tour in November 2007 to pursue treatment for melanoma, and was temporarily replaced by veteran musician Charles Giordano.
At the time, Springsteen described Federici as "one of the pillars of our sound and has played beside me as a great friend for more than 40 years. We all eagerly await his healthy and speedy return."
Besides his work with Springsteen, Federici played on albums by an impressive roster of other artists: Van Zandt, Joan Armatrading, Graham Parker, Gary U.S. Bonds and Garland Jeffreys.
-
When my dad phoned me about ten minutes ago to tell me the news, he was choked up. It was like a family member had died. And then when I turned on the radio and heard Racing In The Street, with that haunting organ solo, tears began to well in my eyes.
Is it wrong to cry for the death of someone you've never met? It's hard to explain that seemingly irrational emotion that you can't keep buried. But I guess when you follow a band for your entire life; a band as tight as the E Street Band, where the members have been there since the beginning and you know their personalities and their personal lives, to say nothing of how important they are musically; each of the members begin to feel a little bit like distant family members. And the truth is, this particular band has almost certainly affected my life more than any distant family member ever could.
It is a sad day for Springsteen fans the world over, and it is safe to say that the E Street Band will never be the same.
Posted by Sean McCallum at 8:37 a.m.

Nicely done, Sean. Couldn't have said it better myself. I always wondered how people could get so emotional about celebrities dying (John Lennon, Princess Di, etc) when it's somebody you never even met before. But Danny's passing was the first celebrity death that really mattered to me in my life and the emotion certainly is real. RIP Phantom Dan. "Sky of fullness, sky of blessed light."
-Blake