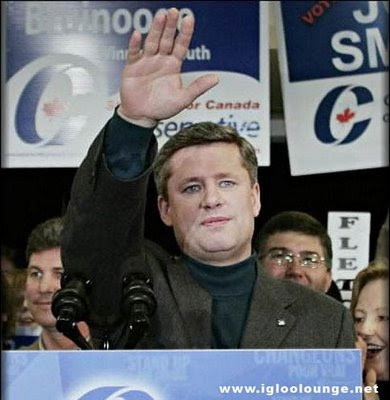 If a picture is worth a thousand words, this one is worth a million. How a country as great as Canada can elect a leader like Stephen Harper is beyond me.

All you need to know about how much Stephen Harper cares about you as a Canadian can be found in his official policy regarding the death penalty:

* Has recently changed its policy so that Canada will no longer fight to reverse the death sentences of Canadians facing execution in foreign countries.


On a side note, is there any chance that the Conservatives get elected in a two-round voting system?

The two-round system (also known as the second ballot or runoff voting) is a voting system used to elect a single winner. Under runoff voting, the voter simply casts a single vote for their favourite candidate. However, if no candidate receives an absolute majority of votes, then all candidates, except the two with the most votes, are eliminated, and a second round of voting occurs.

I don't think there's any way that people who vote Liberal / NDP / Green are voting Conservative in the second round of voting in their respective ridings. And considering the Conservatives only recieved about 35% of the national vote, I really think the two-round system (completely different from the U.S. two-party system, which might be the worst political system this side of dictatorship) would go a long way in better reflecting the proportional vote.

Is it time for electoral reform in Canada? It's certainly something to think about.
Posted by Sean McCallum at 10:49 p.m.

Aside from all of this, the Conservatives "are completely against the decriminalization of marijuana and seek to make the laws regarding marijuana stiffer", demanding "minimum prison terms for drug crimes".

Where's the fun in that?

To me, all of these ideas sound like the exact opposite of progress.

I'd love to see the two-round system implemented, so I'm in complete agreement on that.

Maybe a two-round system would help get more voters out, but I'm not certain. Given how significant of a number the non-voters are, they definitely already have power, they're just not using it.


Can somebody please explain this is an accurate representation?

Sheen,
How about an Interim Liberal leader with the last name McCallum?

Just replying to the comment about 6% of the vote going to the Greens but getting no seats.

All this indicates to me is the failure of civics lessons in our schooling system. The first-past-the-post voting system has been in place in Canada since Confederation. Anyone voting for the Green should have realized well in advance they were not going to win a seat (Elizabeth May came closest and she still was a ways off from winning a seat).

A case can be made for some form of PR, but demonstrating that 6% of the people are willing to throw away their vote does not make the case.