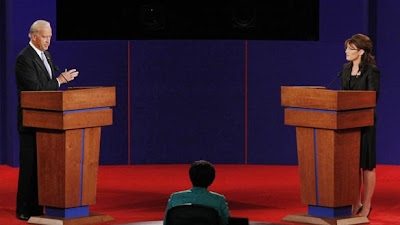 By no means am I the second coming of Tim Russert, but the question needs to be asked: Was that the most lopsided debate in the history of televised politics?

I'm still waiting for Sarah Palin to make a point... or to outline the plans of her party... or to answer one of the questions put forth by the mediator. I think Joe Biden put it best when he said: "Gwen, I don't know where to start."

I don't doubt for a second that Sarah Palin is an intelligent woman, or that she is infectiously charming, or that she has done remarkable things in her life. She is most certainly a breath of fresh air in the political landscape, and is probably the most likable VP candidate in the history of American politics. And I don't doubt for a second that she understands the plight of the average, middle-class American family. But those virtues alone do not qualify her to serve as vice president of the United States of America. Saying that she is qaulified is like saying that because I can sing the national anthem and I played house league hockey as a kid, I should be the assistant captain of the Canadian Olympic hockey team. The notion is absurd. In both instances, we are completely out of our depth.

My girlfriend made an interesting point, arguing that maybe the Republicans wanted someone in there who didn't know what they were talking about. Because when you get right down to it, there's no way to defend what has transpired in the past 8 years under the Bush administration. And when facing that reality, maybe your party's best play is the "no speak a da English" card.

But even if you somehow manage to separate yourself from the sins of your party's previous reign (doubtful), I think at the very least, you need to have some kind of a plan moving forward. And from what I could gather tonight, the Republicans have absolutely no clue what that plan entails, because Palin's responses rarely strayed from the hollow, non-specific, cliched catch-phrases we've become far too accustomed to in politics ("we're going to fight for America"; "we have to fight for our freedoms"; "at the end of the day, as long as we're all working together for the greater good, it's going to be OK"...).

Or what about: "(You create jobs) ...by lowering taxes on American workers and on our businesses. And you build up infrastructure, and you rein in government spending, and you make our -- our nation energy independent." All of this sounds great, but without an actual plan for how to achieve these sprawling ambiguities, it means nothing.


- About halfway through the debate, I openly wondered just how drunk the group of us would be if we were doing a shot for every time Palin mentioned the word "Alaska". The same game could have easily applied to Biden for using the word "fundamental".

- How funny is it that the debate was sponsored by Exxon Mobil? I'm pretty sure Biden scape-goated them half a dozen times.

- What the hell is an "all of the above" approach to climate change? I'm totally using this as a defense in indefensible situations from now on. As in:

- Were you just checking out that girl's ass?
- I was simply taking an "all of the above" approach to her.


- I love it when people say that terrorists and dictators hate America because they "hate what we stand for, with our freedoms, our democracy, our tolerance, our respect for women's rights..." I understand that some people might not agree with those values, but I find it hard to believe that they'd hate a country simply for that reason. I mean, I don't agree with guys wearing speedos, but I don't hate Portugal for it.

- Why is it that I work in a field related to sustainable energy, and I hadn't heard the phrase "clean coal" until tonight?... Oh yeah. That's why.

- Are the Castro brothers still considered "dangerous dictators"? At this point, don't people just think of Fidel as one of those eccentric, fun-loving, somewhat-senile uncle-types?

- What would the Vegas odds have been on Biden being the first to cry tonight? A thousand-to-one? A million-to-one?

- Is there any chance that Palin and Biden are having an affair? There appeared to be more than just a little flirting going on up there.

And finally: Everything you need to know about the American Presidential election in 4 YouTube clips:

UPDATE:
The most recent SNL skit (the VP Debate) pretty well nails everything mind boggling about Thursday's debate. From the drinking game reference to the utter confusion regarding the gay marriage question (I still have no idea where Biden stands on that one), this is absolutely perfect. I also love the fact that Queen Latifa prefaces the proceedings by suggesting that as long as Palin didn't completely embarass herself, the debate would be considered a draw. The allusion to Biden's main goal (not annihilating Palin) is phenomenal, as is the "Joe Biden is better... than that".
SNL's Biden-Palin VP Debate
Posted by Sean McCallum at 11:46 p.m.

I've had three people at work ask me what I was giggling about. I can't believe you managed to incorporate banana hammocks into an entry about a political debate. That's great work.

I can't believe that some major newspapers are saying that Palin held her own and that she did really well last night. She was a fucking train wreck.
P.S. Matt Damon is my hero.