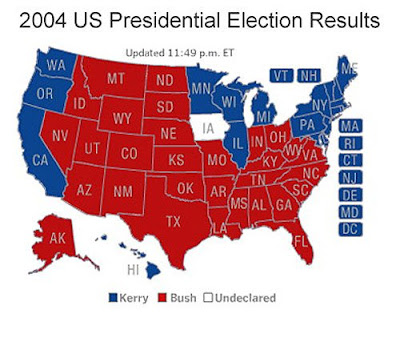 I have no idea how accurate this is, but it seems close enough on most counts. Really makes you wonder why anyone would want to be grouped with the Reds...

Come on, Red States: it's not too late to join the Blues.

Thanks to D-Hibb for passing this along.

(By the way, if you missed Will Ferrell's classic version of W. on Thursday night, you can check it out HERE)

We've decided we're leaving. We intend to form our own country, and we're taking the other Blue States with us. In case you aren't aware, that includes California , Hawaii , Oregon , Washington , Minnesota , Wisconsin , Michigan ,Illinois and all the Northeast. It may even include Florida and Ohio , they are seriously considering it. We've given them until Nov. 4th to decide. We believe this split will be beneficial to the nation, and especially to the people of the new country. Since we're dropping the middle states we're calling it United America, or simply the U.A.
To sum up briefly: You get Texas , Oklahoma and all the slave states. We get stem cell research and the best beaches. We get the Statue of Liberty. You get Dollywood. You can take Ted Nugent. We're keeping Bruce Springsteen and Billy Joel. You get WorldCom. We get Intel and Microsoft. You get Ole' Miss. We get Harvard and 85 percent of America 's venture capital and entrepreneurs. You get Alabama . We get two-thirds of the tax revenue, you get to make the red states pay their fair share.
Since our aggregate divorce rate is 22 percent lower than the Christian Coalition's, we get a bunch of happy families. You get a bunch of single moms, and the highest concentration of pregnant unwed teenagers. Please be aware that the U.A. will be pro-choice and anti-war, and we're going to want all our citizens back from Iraq at once. If you need people to fight, ask your evangelicals. They have kids they're apparently willing to send to their deaths for no purpose, and they don't care if you don't show pictures of their children's caskets coming home. We do wish you success in Iraq , and hope that the WMDs turn up, really we do, but we're not willing to spend our resources in Bush's Quagmire. We'd rather spend it on taking care of sick people, and educating our children.
With the Blue States in hand, we will have firm control of 80 percent of the country's fresh water, more than 90 percent of the pineapple and lettuce, 92 percent of the nation's fresh fruit, 95 percent of America's quality wines, 90 percent of all cheese, 90 percent of the high tech industry, most of the U.S. low-sulfur coal, all living redwoods, sequoias and condors, all the Ivy and Seven Sister schools plus Stanford, Cal Tech and MIT. With the Red States, on the other hand, you will have to cope with 88 percent of all obese Americans (and their projected health care costs), 92 percent of all U.S. mosquitoes, nearly 100 percent of the tornadoes, 90 percent of the hurricanes, 99 percent of all Southern Baptists, virtually 100 percent of all televangelists, Rush Limbaugh, Bob Jones University, Clemson and the University of Georgia. We get Hollywood and Yosemite, thank you.
Additionally, 38 percent of those in the Red states believe Jonah was actually swallowed by a whale, 62 percent believe life is sacred unless we're discussing the war, the death penalty or gun laws, 44 percent say that evolution is only a theory, 53 percent that Saddam was involved in 9/11 and 61 percent of you crazy Redies believe you are people with higher morals then we Bluies..
Finally, we're taking the good pot, too. You can have that dirt weed they grow inMexico .

Peace out,
Blue States
Posted by Sean McCallum at 11:40 p.m.

Second, the red state / blue state maps obfuscate the political polarization in the states. It's actually more of an urban versus rural divide. Cross the border into rural NY and MI for example, and the polling is actually pretty similar to what happens in rural TX. The main difference between all the states is primarily in how many people live in cities versus rural areas.

I think you could scour the earth and not find anything similar to what happens in rural Texas.