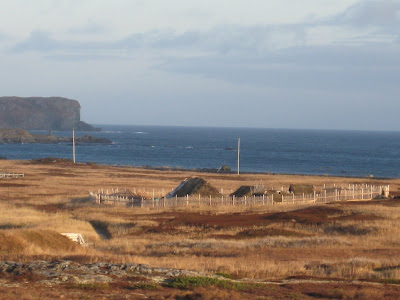 I love Newfoundland. I really do. Aside from the beautiful landscape, the fantastic bastardization of the English language, the phenomenal amount of seafood, and the friendliest people on the planet; there’s just a different pace to life here that you simply can’t find anywhere else.

Case in point: the past week of my life.

One of the advantages of my Clark Kent job (beyond all of the other obvious advantages; you know, like the fact that they deposit a pay check into my bank account every two weeks) is that they’re oftentimes willing to listen to some of the seemingly absurd notions I have regarding potential PR opportunities vis-à-vis sustainable roofing technology. So when 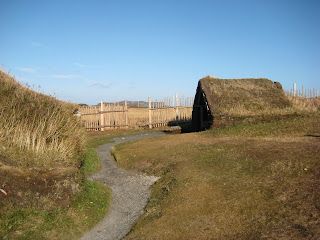 I came to them last summer with an idea for how we might be able to get our Vegetated Roofing membrane beneath the oldest green roof in North American, they were at least willing to entertain the notion.

Fast-forward 14 months, and I found myself bleary-eyed and boarding a plane for Deer Lake on a Sunday morning, with my eventual destination being the Viking sod huts of L’Anse aux Meadows, NL.

But before departing for Newfoundland, there were many, many details to iron out. And let’s just say that trying to do so with the laid back Newfoundlanders wasn’t exactly the most stress-free episode of my life.

With the help of a couple of engineers and veteran roofers, we were able to come to a pretty quick decision on the basic design for the system, while staying as true as possible to the original details. Needless to say, building science has come a long way in the past 1,000 years, but the same basic principles still apply when it comes to roofing: keep the elements out, while keeping the energy (heat) in. My thinking was that if we could figure out the basic design elements, things would be a breeze from there.

Shipping the materials to the island was a different story altogether. I was scheduled to arrive on site first thing Monday morning, so I called on Wednesday to make sure everything was still on schedule. Of course, when I called the Newfoundland shippers, ol’ Lorne greeted me like a long lost friend: “Ah geez buddy. I meant ta call yis dis week. The boat, she couldn’t comes in yesterday. The winds is too strong. You’ll have to check back wid me tomorrow, boy”.

When I called the next day, ol’ Lorne informed me that the materials wouldn’t be arriving in Corner Brook until Friday, meaning that they probably wouldn’t make it up to L’Anse aux Meadows (about 500 kms up the peninsula) until Monday afternoon. Of course, I was under the impression we’d be getting to work Monday morning, so I offered to pick up some of the materials myself when I arrived on Sunday, just so we could get started: “Ya know boy, any other Sunday would be no problem, but I gots me huntin’ trip this weekend, so there’s be no one here, buddy.”

My first lesson in the Newfoundland pace.


Complicating matters was the fact that the Discovery Channel (Daily Planet) had gotten wind of the project, and were planning on sending a crew out to film the entire production. The researchers and the producer were calling me incessantly in the days leading up to my departure, trying to learn as much as possible, in the hopes of having the crew o 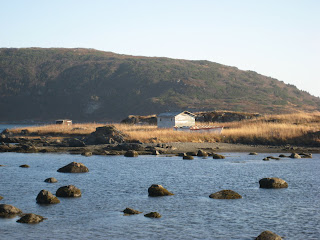 ut there with me for first thing Monday morning.

This soon became the most stressful episode of my young life.

Before Daily Planet could get anything in motion, they needed a filming agreement from Parks Canada. We were on the phone with Parks Canada Thursday afternoon, speaking to the appropriate person from the communications department. When we told her that the people from the Discovery Channel would be calling the next day to get the agreement ironed out, this lady from Parks Canada assured us that this was no problem, that she’d send it over just as soon as she heard from the Discovery Channel. When the researcher from Discovery called this same lady the next day, she was informed that the communications director was off for the next six weeks… Six weeks! It was incomprehensible to me how the lady we spoke to the day before could have failed to mention that she would be off for six weeks, starting the next day, but apparently, this didn’t seem like information worth mentioning. We eventually tracked down someone else to send the agreement along.

The next issue for the people at the Discovery Channel was that they needed to speak to the project manager in order to get a handle on the reconstruction schedule. Jim is the man to speak to on this project, and I have been communicating with him for the better part of the last year. Jim is the salt of the earth. You’ll never meet a better guy in your life. But he isn’t exactly in a rush to get back to you sometimes. So when the researcher from the Discovery Channel left 6 messages with Jim on Thursday, saying that she just needed to speak to him for two minutes in order to give the go ahead to the crew so they could get out there for Monday morning, it wasn’t until sometime on the weekend that Jim got a chance to call her back.

I was literally smashing my face against my desk in frustration.

We were obviously working on Newfie time. And it is something us mainlanders who come from away simply can’t begin to fathom.


But then I arrived in Newfoundland on Sunday afternoon, and suddenly it all made sense.

It made sense to me when I arrived at the site at L’Anse aus Meadows and tried apologizing to the project manager for the fact that some of the materials had yet to arrive (his response: “Don’t worry, boy. We’re on an island here. These things happen.”). 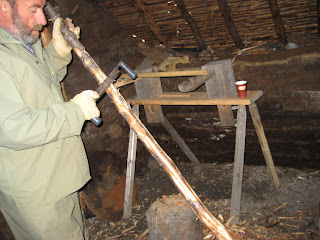 evious summer were hard at work, restoring the hut whitty by whitty, rhining each stick by hand.

It made sense to me when Jim invited me to lunch at the bed and breakfast he was staying at (Marilyn’s Hospitality Home) in Hay Cove because he knew they were having fresh Cod, and being from away, I just had to have some of Marilyn’s home cooking (the Cod with onions and scrunchions and bread pudding and fresh rolls and potatoes from out of the garden… all of it, right down to the fresh sticky buns for dessert, was out of this world).

It made sense to me when Marilyn asked at lunch if I’d ever had Turrs before (not only had I never had them, but I didn’t have the faintest clue as to what she was talking about), and then invited me for dinner that night because she knew that I would probably just be going back to the hotel for Mary Brown’s Chicken all over again (that night’s jigs dinner: salt beef, cabbage, turnip, potatoes, carrots, stuffing, bread pudding, and of course the Turrs, taken from the bay about 50 feet from where we were eating… absolutely unreal).


It took me all of about three hours to slip into this easy, laid back way of life. There I was, without a cell phone or email, with the producer from the Discovery Channel leaving frantic messages on my voicemail, and my mindset was basically… “I guess I’ll just have to give him a call later…” before sitting down to tea and sweets with the Vikings on their break as they wove endless tales about growing up in a town with a population of 60. 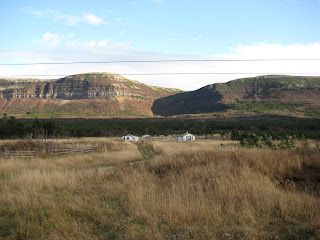 The thing is: things eventually get done in Newfoundland. They just happen at a different pace. Nothing is so important or urgent that it can’t wait for your conversation to be finished, or for your 3 o’clock coffee break to be over, or for after supper, or for the next day, or the next week... It’s about the most stress free existence one could ever imagine… But you have to be here to get it.

The people from Daily Planet are still leaving messages on my cell phone that still doesn’t get any reception. But I’m not all that concerned anymore. I know that when the people from the Discovery Channel eventually make it out to L’Anse aux Meadows, on Newfie time, they’ll understand completely.
Posted by Sean McCallum at 2:14 p.m.

The only reason Newfie jokes are so simple, is cuz we want Mainlanders to understand 'em.