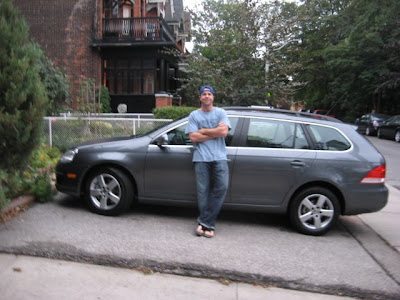 I come from a Volkswagen family. The car I learned to dive stick on was an old VW Rabbit with a wonky transmission (it was devoid of 1st gear, 5th gear, and Reverse). When I drove across the continent with a couple of buddies in the summer of 2001, we did so in an '89 Golf Diesel that had more than 415,000 kms when we set out. There was a brief period in my life when I was driving around London, ON in a not-overly-masculine VW Cabriolet that I had on loan from my dad. And the first car I ever bought outright was a '99 Golf that I drove for five glorious years. Hell, we even invited our family VW mechanic to Dornochapalooza this year.

So when it came time to masquerade as an adult and purchase a new car (I was getting flak from my boss about having to park with the dish pigs and greenskeepers whenever we'd play at swanky golf courses for charity tournaments), there was little debate over what I'd be shopping for.
What most people don't realize about the new Super Clean Diesel is that, where gas mileage (45-50 mpg on the highway; 1,100 kms per tank), efficiency, and emissions are concerned, it is actually in the same ballpark as the Toyota Prius. Taken from the recent piece in Popular Mechanics entitled, New VW Jetta Diesel Tops Prius in Fuel-Economy Marathon Test:

It appears clear, no matter what the driving conditions, that the Toyota Prius will return around 44 mpg—if driven with a sane right foot. That's impressive, and that means the Prius remains the most fuel-efficient car on the market. The Jetta falls short in pure city driving, but it does meet (and barely beats) the Prius when it comes to highway fuel economy in our testing... When it comes down to which of these two popular efficient cars is more fun and more comfortable to drive everyday, it's an easy pick: We like the Jetta TDi, and the fuel-economy numbers in the real world for VW's new player make it—gasp!—a legit Prius fighter.

Not bad for the descendant of a car that had a sawed-off hockey stick to prop the hatchback door up with, and that used to require daily push starts every morning, the result of which invariably leaving the unfortunate pushers in a cloud of black soot. 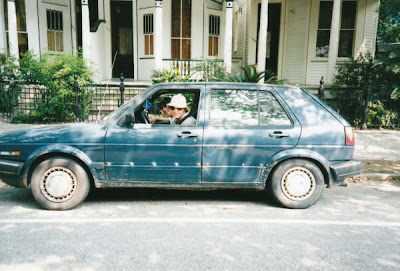 Now, about that whole decision to buy a station wagon...

To read more about the 2009 VW TDI:
Popular Mechanics explains how the new TDI is "super clean".
MotorTrend's review, complete with all of the technical details which might as well be written in Swahili for all they mean to me.
Posted by Sean McCallum at 2:00 p.m.

But I think a Subaru or black Trans Am would have impressed the Springsteen crowd.

Where are you living, background looks familiar.