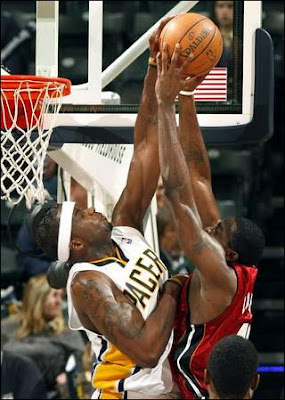 On the eve of the NBA draft, the Toronto Raptors and Indiana Pacers finally agreed to a trade.

Sources told ESPN The Magazine's Ric Bucher that the Pacers and the Raptors have agreed to a deal that, pending review of medical information, would send Jermaine O'Neal to Toronto in exchange for T.J. Ford, Rasho Nesterovic and the No. 17 pick in Thursday's NBA draft.


Let me be the first to go on record as saying that I love this move. In the hours after the Raps were handed a junior high schoolyard beatdown at the hands of the Orlando Magic, I wrote that if the boys in Red had any hope of competing in the Eastern Conference over the next 10 years, they needed to get tougher. In fact, I went so far as to suggest that they draft for Joey "38.7% Free Throw Shooting" Dorsey in Thursday's draft. But Brian Colangelo has one upped the experts here at SeanMcCallum.com. Because not only did he manage to secure the first legit Center in Raptors franchise history, and a 6-time all-star with plenty of game left to free up perennial All-Star Chris Bosh; Colangelo may have just acquired the Baddest Mother F#cker this side of Charles Oakley.

Just to refresh your memory:


Go ahead and fast-forward to the 1:15 mark. The Raps could use a little dose of that don't-fuck-with-my-team toughness/insanity.


As for what the Raps are sending the other way, it was pretty clear that T.J's time was up in Toronto, as he had basically become the Larry Murphy of the Toronto basketball scene; a skilled player who gets blamed for everything that goes wrong. There are nights when he looks unstoppable as a scorer, but there is no denying that the team is infinitely better with Jose running the point. Rasho was going to walk anyway. As for the 17th pick? Have you taken note of the Raptors draft history? If the names Michael Bradley (17th pick), Rafael Araujo (8th pick), and Joey Graham (one spot ahead of Danny Granger) mean nothing to you, you have proven my point exactly.


I think the Raptors have a much better chance of potentially winning the deal, while I strongly believe that Indiana has absolutely no chance of winning the deal and odds are neither Ford or O'Neal plays that much for either team. As far as upside goes, the Raps have way more, if O'Neal is relatively healthy he is a great compliment to Bosh (as long as he understands that) and with the Raptors shooters also could be a great fit to the team. But he came into the league at 18 so he has a lot of NBA years on him, so I don't think he has a whole lot left. Also I think he is going to clash with Mitchell a lot. That being said Ford just had to go for so many reasons, health, attitude and overall leadership and his game wasn't suited to being a starter. So what's interesting is that the Raptors gave up absolutely nothing at all that was valuable to them to get O'Neal, and if it doesn't work out you have a 20MM expiring contract the season after. So I think it was a great gamble, with really nothing to lose. I am not sold O'Neal will lead them anywhere great but he does make them a much much better team. That being said the real mistake was taking Bargnani at No. 1, I believe that if you still have it in writing I said that Aldridge was the man to take in that draft. Could of made the same deal for a really good wing player if they had Aldridge, which would have given them the best young team for 6-7 years. Here is why I think it has not really great upside. I doubt O'Neal pushes them over the top, he might since the East is in such disarray but I doubt it. I don't see him staying long term past two years, and if he does what kind of contract do you give a guy who will be 32 with his kind of health with his shoulder and knee problems.

So here is the verdict, I really like the deal for the Raps, because there is at least potential with O'Neal that the team becomes hugely better with two rebounding big men, and a defensive center. I think the front court rotation is decent and guys like Kapono and Delfino will be much better off. I think O'Neal will be traded in a couple years either a team desperate to make a big move and overpay like Dallas this last year, or a team looking to make some big offseason moves when I think it is LeBron, and Wade (unbelieveable free agents class) are on the market and going for cap space. So O'Neal himself may not make them the big winner, but overall it is a great deal. Ford and Nesterovic are totally useless to the Raps so they really have given up absolutely nothing. That being said they absolutely need a big man off the bench and I couldn't agree with you more an ideal fit would be Joey Dorsey. The 17th pick in this draft is going to be a complete crapshoot. I actually like Chris Douglas Roberts on the Raps but I don't think they should pick him at 17 although I see him playing a lot like Jalen Rose. I think Robin Lopez will be gone by then. Let's be honest the best the raps have done at 17 is Mo Peterson and probably the worst was Joey Graham at 16. Any pick above 15 to me is equal chance bust as decent role player both of which don't do much for me. I would like to see them get into the 20's in the first round of the draft only because I like following rookie prospects

As a matter of fact, I still have Rosco's '06 draft projections in writing. For the readers out there who don't know, Rosco sent me this email 2 years ago (May 24, 2006) when I was in South America. I think this breakdown pretty well explains why he is the resident NBA expert.


Unfortunate that the Raps get the #1 pick in a year without a #1. Since you missed the March Madness I will give you my take on who I think the Raps will take. I think realistically it comes down to 3 guys. LaMarcus Aldridge, Tyrus Thomas, and White guy from Italy I can't spell.

1. Aldridge - From Texas, played against Bosh I think in Highschool and are friends. 6'11 center/forward from Texas. He had a good season. But from what I saw in the tournament - He's a bit soft. He's not exactly the big rebounding shot blocking center. He is way more of a finesse player. He has a real nice jump shot and can step out about 15 feet. He is more face up than back to the basket. Nevertheless he is by far the best offensive big man in the Draft. If he could play a bit tougher and rebound some more he would be a definite #1. Although small ball is in right now in the NBA and he could look real good in a front court with Bosh and Charlie V. I think politics (friendship with Bosh) and his size could be a good pick for raps.

2. Tyrus Thomas. Played at LSU with Big Baby. Thomas was red shirted his first year so technically still a freshman. He was an absolute beast in the first couple games of the tournament. He was amazing blocking shots and rebounding. Even had a nice touch on his jump shot. He has ridiculous hops too. If he had 2 more inches on him, he would be a guaranteed first overall pick. Problem is he is 6'9. He is super athletic crazy dunker, but would be a better power forward than Center. He also has some pretty serious intensity. I would really like to see him play for the Raps but I think he may be too small.

3. Shitty White Guy. Played in buttfuck nowhere last year. On second thought I'm not going to bother. You take these guys with a shot in the dark. Not in the top 10.

4. The Stache. I like him, but the raps have no room for him at all. He's not that athletic, good shooter and would do real well in the right situation. I really like him but just not on the raps.

5. Brandon Roy. This is who I would have liked the raps to pick if they had the 5th choice. Real strong 2 guard from Washington. Plays good defence and can really play. Not a number 1 pick.

6. Marcus Williams. Best point guard but I am against all UConn this year, if you couldn't win with that team then you just don't have it. You can have all the talent in the world but you gotta win.


That's my take on the lottery. I think the Raps will take Thomas or Aldridge. Can't really go wrong with either.