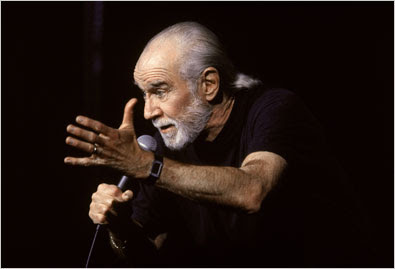 From the Associated Press:

LOS ANGELES – George Carlin, the frenzied performer whose routine "Seven Words You Can Never Say On Television" led to a key Supreme Court ruling on obscenity, has died.

Carlin, who had a history of heart trouble, went into St. John's Health Center in Santa Monica on Sunday afternoon complaining of chest pain and died later that evening, said his publicist, Jeff Abraham. He had performed as recently as last weekend at the Orleans Casino and Hotel in Las Vegas. He was 71.

"He was a genius and I will miss him dearly," Jack Burns, who was the other half of a comedy duo with Carlin in the early 1960s, told The Associated Press.

Carlin's jokes constantly breached the accepted boundaries of comedy and language, particularly with his routine on the "Seven Words" – all of which are taboo on broadcast TV and radio to this day.

When he uttered all seven at a show in Milwaukee in 1972, he was arrested on charges of disturbing the peace, freed on $150 bail and exonerated when a Wisconsin judge dismissed the case, saying it was indecent but citing free speech and the lack of any disturbance.

When the words were later played on a New York radio station, they resulted in a 1978 Supreme Court ruling upholding the government's authority to sanction stations for broadcasting offensive language during hours when children might be listening.

"So my name is a footnote in American legal history, which I'm perversely kind of proud of," he told The Associated Press earlier this year.

Despite his reputation as unapologetically irreverent, Carlin was a television staple through the decades, serving as host of the ``Saturday Night Live" debut in 1975 – noting on his Web site that he was "loaded on cocaine all week long" – and appearing some 130 times on "The Tonight Show.''

He produced 23 comedy albums, 14 HBO specials, three books, a couple of TV shows and appeared in several movies, from his own comedy specials to "Bill and Ted's Excellent Adventure" in 1989 – a testament to his range from cerebral satire and cultural commentary to downright silliness (and sometimes hitting all points in one stroke).

"Why do they lock gas station bathrooms?" he once mused. "Are they afraid someone will clean them?''

He won four Grammy Awards, each for best spoken comedy album, and was nominated for five Emmy awards. On Tuesday, it was announced that Carlin was being awarded the 11th annual Mark Twain Prize for American Humor, which will be presented Nov. 10 in Washington and broadcast on PBS.

Carlin started his career on the traditional nightclub circuit in a coat and tie, pairing with Burns to spoof TV game shows, news and movies. Perhaps in spite of the outlaw soul, "George was fairly conservative when I met him," said Burns, describing himself as the more left-leaning of the two. It was a degree of separation that would reverse when they came upon Lenny Bruce, the original shock comic, in the early '60s.

"We were working in Chicago, and we went to see Lenny, and we were both blown away," Burns said, recalling the moment as the beginning of the end for their collaboration if not their close friendship. "It was an epiphany for George. The comedy we were doing at the time wasn't exactly groundbreaking, and George knew then that he wanted to go in a different direction.''

That direction would make Carlin as much a social commentator and philosopher as comedian, a position he would relish through the years.

"The whole problem with this idea of obscenity and indecency, and all of these things – bad language and whatever – it's all caused by one basic thing, and that is: religious superstition,'' Carlin told the AP in a 2004 interview. "There's an idea that the human body is somehow evil and bad and there are parts of it that are especially evil and bad, and we should be ashamed. Fear, guilt and shame are built into the attitude toward sex and the body. ... It's reflected in these prohibitions and these taboos that we have.''

Carlin was born on May 12, 1937, and grew up in the Morningside Heights section of Manhattan, raised by a single mother. After dropping out of high school in the ninth grade, he joined the Air Force in 1954. He received three court-martials and numerous disciplinary punishments, according to his official Web site.

While in the Air Force he started working as an off-base disc jockey at a radio station in Shreveport, La., and after receiving a general discharge in 1957, took an announcing job at WEZE in Boston.

From there he went on to a job on the night shift as a deejay at a radio station in Fort Worth, Texas. Carlin also worked variety of temporary jobs including a carnival organist and a marketing director for a peanut brittle.

In 1960, he left with Burns, a Texas radio buddy, for Hollywood to pursue a nightclub career as comedy team Burns & Carlin. He left with $300, but his first break came just months later when the duo appeared on Jack Paar's "Tonight Show.''

Carlin said he hoped to emulate his childhood hero, Danny Kaye, the kindly, rubber-faced comedian who ruled over the decade Carlin grew up in – the 1950s – with a clever but gentle humour reflective of the times.

"I was doing superficial comedy entertaining people who didn't really care: Businessmen, people in nightclubs, conservative people. And I had been doing that for the better part of 10 years when it finally dawned on me that I was in the wrong place doing the wrong things for the wrong people," Carlin reflected recently as he prepared for his 14th HBO special, "It's Bad For Ya.''

Eventually Carlin lost the buttoned-up look, favouring the beard, ponytail and all-black attire for which he came to be known.

But even with his decidedly adult-comedy bent, Carlin never lost his childlike sense of mischief, even voicing kid-friendly projects like episodes of the TV show "Thomas the Tank Engine and Friends'' and the spacey Volkswagen bus Fillmore in the 2006 Pixar hit ``Cars.''


George Carlin is the only comedian I have ever paid money to see (Las Vegas, MGM Grand, 2001 - The performance included the best/most offensive opening line in the history of comedy), and in my opinion, he is far and away the most socially relevant comedian we've ever known. No comedy collection is complete without "Seven Words You Can Never Say On Television" (in honour of Carlin, here they are: "Shit, Piss, Fuck, Cunt, CockSucker, MotherFucker, and Tits"), and for my money, 1996's Back In Town is the best hour of standup I have ever come across.

I have to say that George Carlin saw the world in much the same way that I do, and in many ways he said the things that most of us were afraid to say. He will be missed greatly.


Some of his finer work can be found below (Language is extremely NSFW - just the way we like it):


And white guys, over ten years of age, who wear their baseball hats backwards. Black guys, you started the whole thing, so we're going to let you stick with it a while longer, but really, once you're old enough to be collecting social security, it's time to spin that mother f*cker around to the front again.


Yep, my kind of comedian.