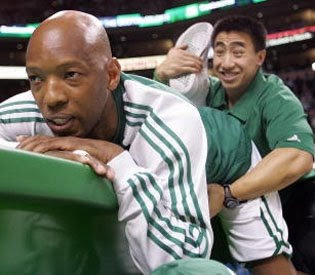 This game isn't over officially over yet, but Jesus Shuttleworth just drained a wide open 3 from the corner to put the Celtics up 101-70. If the Swirsk were working for NESN, he'd be screaming about Salami and Cheese right about now.

Since my buddy Flats moved to Boston, they have had about 37 Championship parades, so I'll pose the question that El Prez has been asking for weeks: is it even considered a legitimate championship if a Boston team isn't involved? At this stage of the game, you almost have to say NO.

By the way, I know that this is completely tasteless (2nd entry), but is it funny? I say yes.
And this might be one of the best (read: incoherent) post-game interviews of all-time. The only two things I know are that KG loves his mom, and I'm not going to be the one to tell him there's anything wrong with that.