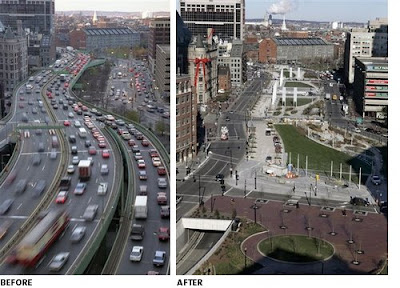 I meant to write about this project back in January, when Boston's Big Dig was officially completed. But things slip your mind, you move on, and by the time you think of it again, it hardly seems as relevent as it did six months ago. In any event, there was something in one of Bill Simmons' recent articles that reminded me that I still needed to write about exactly what the big dig - by most measures a civic catastrophe as far as budgets go - has done for the city of Boston.

When a bunch of my friends and I went to visit my buddy Flats in Boston last December, we stayed at his place on Isabella Street (go ahead and click on that link to see how close his place is to the Mass Pike - and then fiddle around with the satelite image to see where the highway disappears. Unreal). I didn't even realize until the morning we left that he was living about 100 feet from the busiest highway in New England.

In his recent article about the rebirth of Boston, the city's favourite son waxed poetic about exactly how his city has been transformed by the project:

Once upon a time, Boston was a pretty easy place to understand. Things never changed and, more importantly, we liked it that things never changed. Life revolved around the weather cycles (often brutal), the sports teams (often disappointing) and those occasionally fabulous days in April or October when the sun was shining and there wasn't a prettier place to be. We dealt with traffic, snow, construction, parking problems and sports letdowns year after year, and that's just who we were. Everything was symbolized by the Big Dig, a project that promised to rejuvenate the city and put our highways underground, only it fell years behind schedule and bled billions in cost overruns, rendering Boston impotent for a number of years. I graduated from college in '92 and spent the next decade living in the city (mostly in Charlestown) dealing with jackhammers and detours the entire time. After a while, you stopped thinking about it and assumed that's the way the city would always be -- mangled, ugly and messed up. Nobody could conceive of life after the Big Dig. It just seemed incomprehensible.
Well, the project finally ended two years ago. Remember the reality show "The Swan," in which someone gets an extreme makeover and tons of plastic surgery and family members stare at him or her in complete disbelief? That's how I feel every time I come back to Boston. If there was a defining trait for the Causeway area other than the old Garden, it was the Green Line, which ran above ground (you might recall seeing the shot of the train rumbling toward the Garden before every Celtics game) and right over Causeway Street. Scattered around the area were a number of bars, including some classic ones (Harp, Sullivan's Tap, Four's) and a never-ending group of bars in static locations that always seemed to change names every 18 months. On paper, this seems kind of cool. In reality, it meant the tracks hung over the street, blocked every inch of sunlight and dripped smelly water every time it rained or snowed, and on top of that, you had to hear the deafening screech of the train rumbling by every few minutes.

Here's why I'm telling you this: The Causeway of 2008 has zero in common with the Causeway of 1998. Once the construction was finished, you could have blindfolded me, spun me around a few times, dropped me in the middle of Causeway and asked me where I was, and I wouldn't have had a clue until I noticed the Harp or Halftime Pizza, and even then, I would have been confused. You wouldn't call the area beautiful or anything, but it's sunny and happy, and in an implausible twist, you can stand at the old North Station stop -- flanked by a ghastly and unsafe I-93 ramp once upon a time -- turn toward Faneuil Hall and actually see Faneuil Hall from a distance. What was once highway ramps, bridges, "T" tracks and construction has been replaced by grass and sidewalks. "Incredible" isn't a strong enough word. In fact, you could walk from Quincy Market to the North End to Causeway Street to the Red Hat to the top of Charles Street and (A) remain in the sun for the entire time and (B) actually enjoy the trip without feeling you might get mugged.
It's just a different city. The Baby Boomer generation keeps drifting from the suburbs into Back Bay, the South End, the North End or Beacon Hill, leading to a peculiar situation in which real estate prices keep climbing in a market in which prices are swooning everywhere else. And thanks to relaxed tax laws, Hollywood has descended on downtown in droves; instead of nonstop construction, you're more prone to see trailers, lights and policemen blocking off a brownstone or a building. On Friday night, I went to pick up my friend Willy at his place on Commonwealth Avenue; across the street, something was happening but I couldn't figure out what.
"That's where they're filming the new Bruce Willis movie," Willy said matter-of-factly.
Oh.
Living here from day to day, it's probably tougher to realize how much Boston has changed -- how many nice restaurants, clubs and bars are scattered throughout the city, how much easier it is to get around, how much happier and efficient and sleeker things seem -- but it's something I couldn't stop wrapping my head around for six days, from the moment I arrived at Logan Airport (no longer a travesty of a dump, by the way) and found myself in one of those secret handshake tunnels that cab drivers use now to get from Logan into the city. Crazy. The whole thing is crazy.

Boston is now a city where you can walk everywhere. When I visited for the first time, back in 1999, I didn't think much of the place. Yeah, Fenway was a baseball cathedral, and we had some pretty solid Chowder in the market, but other than that, it felt like just another city. But this last time around, I couldn't stop talking about how beautiful a city it was. On more than one occasion, my buddies were imploring me to sit down on a park bench and write a haiku about it or something, just to get it over with so I would shut up already. The city really was a different place, but I couldn't really put my finger on exactly why. And then three weeks later, I read that the big dig was officially completed.

For those of you who live in and around Toronto, I don't need to tell you what kind of an obstruction The Gardiner Expressway is. It severs the city from the waterfront. It makes those condos lining its periphery some of the least desirable places to live. It is daunting to walk beneath. And it too drips disgusting wet stuff in the winter.

Now just imagine if that raised artery was beneath the city? You would be able to walk from the CN Tower to the waterfront without giving it a second thought. You would actually be able to see the lake from the downtown streets, a completely foreign concept, I know (for those readers outside of Toronto, you would never know it, but we're actually situated on one of the largest freshwater lakes in the world... except no one can see it!). All of those condos facing the highway would become desirable places to live. It would create more green space. It would promote more walking, more biking, more rollerblading... And what's more, with the Gardiner out of the way, you could widen Lakeshore Boulevard and model it in the tradition of Avenida 9 de Julio in Buenos Aires; for my money, one of the most recognizable streets in the world. Hell, you could even slap a dedicated streetcar line in the middle of that glorious, newfound expanse, and actually give people a means by which they could reliably get to the beaches.

The plan just seems too good to be true. And sure, the project would probably bankrupt the city, and traffic would be disgusting for ten or twelve years (would this convince people to use public transit?); but I think in the end a big-dig-like project that could bury the Gardiner and reconnect this great city with the waterfront, and in the process allow for the growth of our lacking public transportation system and promote more walking and cycling is exactly what this city needs.

To learn more about the $14.6 billion Big Dig project, and how the average drive through downtown Boston has been cut from 19.5 minutes to 2.8 minutes, click HERE.

(Do those pre-big-dig problems sound familar?)
Posted by Sean McCallum at 12:12 p.m.