I have no idea why, but I found this review to be entirely essential reading. Maybe it's because I'm not man enough to swill on forties (the one night in University when I tried drinking Colt 45s, I ended up getting emasculated and annihilated in a game of Beirut at the hands of a sober girl, and wound up with a three day hangover that resulted in my sleeping through St. John's shot at winning a share of the Big East regular season title {they lost 74-70 in OT to Miami, for the record}, and my missing the next two days of class). Maybe it's because I'm 30 years old and still haven't found anyone willing to play Edward 40-Hands with me. Or maybe it's because I'm going out to Sneaky Dees for my cousin's 19th birthday tonight and will probably wind up drinking beer comparable in quality to those described below.
Whatever the reason might be, here is everything you ever needed to know about Malt Liquor.
Taken from Modern Drunkard Magazine:
40 Ounces of Fury: The Definitive Malt Liquor Taste Test
The beer so strong they don’t even call it beer — they call it liquor. The brew from the bad part of town, the staple of gangstas and punk rockers, barrios and trailer parks. Strong, cheap and raw. Served up in a big bottle that hangs in your hand like a blackjack. Named after large man-killing animals and high-powered firearms. Activist groups say it causes violence, yuppies say it tastes like poison, experienced users know it dishes out mule-kick hangovers. That’s right, baby, we’re talking malt liquor.

Colt 45
Alcohol Content: 5.61%
AKA: Billy Dog, Billy D Juice.
Rep: The grand daddy of malt liquors.“Works every time,” as Billy Dee Williams liked to say, but works at doing what? Notorious for green batches, three different samples revealed the same result: flat, skunky and raw. This is what the President of MADD suspects malt liquor tastes like and if you want to experience the dark side of malt liquor, jump on this evil bronco.
Aesthetics: The label has changed very little since it hit the market in the 60s, and why should it? To some people it’s as recognizable and comforting as Aunt Jemima.
Trivia: Though it’s militant moniker refers to the fact it once came in a 45 ounce bottle and gives a bigger “bang” for the buck, Colt .45 has always been careful to never show a gun in their advertising, so they won’t be sued by Colt Firearms, maker of the famed Colt .45 pistol.
Flava: 5
Street Cred: 8
Power: 5
To read more about the wonderful world of Malt Liquor, click HERE.
Bonus Material: The most random website in the world, entirely dedicated the the age old art of swillin'. 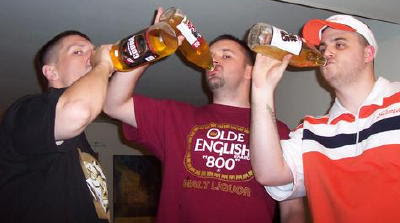 Appreciate this specific valuable submit! Make sure you routinely keep it coming back. Regards.

It's a wonderful post. I do appreciate the wonderful performance created by your company

This really is plenty of great points. I discovered many things that I've been trying to find.

We appreciate the info. Done well!