The King of Kong

Video games aren't really my thing. In fact, I haven't enjoyed playing video games since I finished Super Mario Bros. 1 in my buddy B*Rad's basement when I was 10 years old, electing to go out on top of the gaming world in the same way that John Elway was destined to do ten years later. But believe me when I say that you don't necessarily need to be a "gamer" to enjoy "The King of Kong: A Fistful of Quarters".


First off, I vividly remember hanging out in the scuzzy arcades of places like Grand 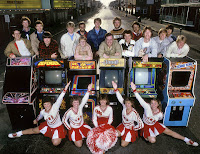 Bend, ON, and crowding around the "Street Fighter" game in awe of some dude with a pubescent mustache and an Iron Maiden T-shirt as he ran the tables on anyone brave enough to step up. It was like a right of passage in any summer destination town to get your ass handed to you by the local arcade champ... And if you ever wondered about what happened to that guy that beat you in Street Fighter, or in Pac Man, or in Centipede; chances are he can be found in this movie.


I don't know exactly what it is about this documentary, but ever since I sat back and watched it, I've found myself strangely obsessed with it. Maybe it's the good vs. evil dichotomy... Because make no mistake about it: Billy Mitchell is pure evil in this movie. After I finished watching it for the first time (yes, I have watched it multiple times), I found myself wondering aloud who was the better villain: Billy Mitchell or that guy with the CO2 canister in "No Country for Old Men".

Or maybe it was Billy's band of nerdy minions. I mean, Brian Kuh is the prototypical toadie, carrying out Billy's dirtywork like a devoted lover and fawning over Billy as if he were some sort of a demi-God; the veritable Grover Dill to Billy's Scut Farkus. And how could you not love the guy who uses the acronym DDG ("Drop Dead Gorgeous, in case you don't know") and has to wear a weight lifting glove so as not to receive joystick calluses. And what about STEVE SANDERS?!?! I mean, the guy looks just like STEVE SANDERS!!! It's uncanny. I wonder if he's had to go through his entire life like the Michael Bolton in Office Space...


But the supreme highlight, as far as characters go, is Roy "Mr. Awesome" Shildt.

Not only is he the world record holder on Missile Command, and not only does he walk around wearing T-shirts that say "Mr. Awesome" on the back, but he posed in Playgirl in 1988, and he has a website titled: www.shockandawesome.com. Honestly, you couldn't make this stuff up. Oh yeah, and he also released a comic book history of his life... and he inexplicably starred in this video... Yet another example of fact being infinitely more interesting than fiction.


But more than anything else, this movie is about Steve Wiebe, a totally sympathetic and likable figure trying to crack into the ultra cliquy and catty world of competitive gaming. You can't help but root for him, especially in light of the fact that his efforts are endlessly squashed b

y the seemingly cowardly and petty Billy, Steve being such a good guy that you even find yourself rooting for him in spite of the fact that Billy totally steals the movie with a 2 second clip that shows him blow drying his exquisitely coiffed mullet to a Leonard Cohen song playing in the foreground, a piece of cinematography rivalling even the greatest exploits of Vittorio Storaro.

One other note about The King of Kong: I have a buddy who looks identical to Billy Mitchell (Rat Tooth, I'm looking at you). It would be an absolute tragedy if he didn't grow a beard and get himself a pair of skin tight black jeans, a USA tie, and a black mullet wig for Halloween. If he commits, I'll gladly go as the Playgirl-posing "Mr. Awesome"... Just throwing it out there...

saw this with not a lot of 'ddg' at a theater in cambridge, mass.

there was both standing and cheering.

good morning friends. I'm actually into shoes and I have been looking for the sake of that particular model. The prices as regards the sneakers are about 230 dollars on every page. But for all I bring about this locate selling them as a remedy for half price. I exceptionally want those [url=http://www.shoesempire.com]prada sneakers[/url]. I will probably purchase them. what can you say about it?

Hmm that's interessting but actually i have a hard time seeing it... wonder how others think about this..