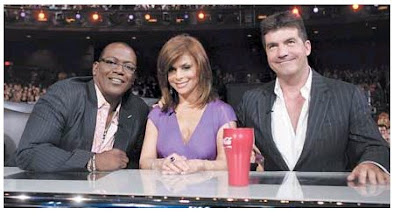 I don't profess to know anything about American Idol. In fact, unless I'm locked in a hotel room in Cleveland and there's a guy singing about breaking into Paula Abdul's house and trying on her underwear, I'm probably not watching at all. But I have to hand it to El Presidente over at Barstool Sports. Now I feel as though I can have an intelligent conversation about the most popular reality TV show in the history of pop culture without having to actually tune in to the show (is there a more oxymoronical statement than: "now I can have an intelligent conversation about American Idol"? I really can't think of one). I might even enter one of those ridiculous American Idol pools with my girlfriend's friends and wind up taking all of their money. So thank you, El Prez. If I end up hitting the jackpot, I'll be sure to buy a T-shirt.
As a side note, is there anything better than talking about American Idol contestants in degenerate gambling terms? I love the fact that he refers to Alaina and Chikezie as "mid-majors". Too funny.

Handicapping American Idol
by El Presidente elpresidente@barstoolsports.com
OK, everybody the wait is over. It’s time for El Presidente’s American Idol preview. Now for those of you who are new to the Stool, let me give you a little history lesson. I have successfully picked the winner of American Idol before the first elimination show has even aired 5 out of the last 6 years. I’ve often said that God gave me three gifts in life. The first one is the ability to get a great parking spot under any circumstance. I’m telling you that I could get a spot right in front of Giacamo’s on Hanover Street at 8pm on a Friday night if I need to. The second gift is the ability to spot a bad fashion trend before I fall victim to it. I was the guy in middle school who never pegged my jeans. I just knew it looked stupid. And finally I can spot the American Idol winner a mile away...
To read more, CLICK HERE.
Posted by Sean McCallum at 10:38 p.m.