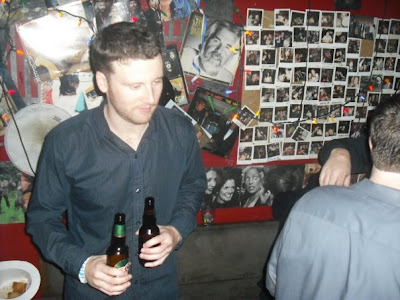 Big run on ultra-hip music here at SeanMcCallum.com.
My buddy Browner is the resident music savant, and he's here to weigh-in with his picks for the best-of this past year. I should tell you that 75% of the new music I listen to comes courtesy of Browner; he works for quite possibly the coolest record label in Canada; and he routinely doubles-up on bottles of Labatt 50 while posing for photos in front of walls decorated with Kenny Rogers albums. If that isn't enough to heed his advice, there's no hope for you.
---

10. Death Cab For Cutie- Narrow Stairs- Another solid record from these guys which sees them taking things in a slightly new direction... just different enough to keep it interesting.

Check out: I Will Possess Your Heart

9. She and Him- Volume One- A great countrified pop album with a '50's throwback feel to it.

Check out: Sentimental Heart, This is Not a Test, Why Do You Let Me Stay Here

8. Flobots- I won't pretend to be completely in tune with the hip hop world, but there was less good stuff that crossed my radar this year than usual. This was the exception.

Check out: Stand up, Rise

7. Land of Talk- Some Are Lakes- These guys have opened for Neil Young and their lead singer has been singing with Broken Social Scene. Works for me.

Check out: Some Are Lakes

6. Bon Iver- A beautiful minimalist album. I read a review that said someone should put Iron and Wine on notice that he has a new challenger. Sounds about right.

5. Duffy- Rockferry- This was another great throwback album. The common comparison is Amy Winehouse, but I prefer Duffy.

Check out: Asking For Flowers, The Cheapest Key, Scared At Night

3. The Constantines- Kensington Heights- Everything came together for vets the Constantines on this album. Noone could more credibly deliver the line "I will not sing a hateful song, though it's in me to sing" than Bry Webb with his trademark growl. And was there a more timely song in 2008 than Credit River?

Check out: Our Age, Time Can Be Overcome

2. The Hold Steady- Stay Positive- Springsteen influenced songs about partying way too hard? Yeah, can't put my finger on what it is I like about this band... perhaps lines like "If she asks don't tell her that I'm living hand to mouth. Don't tell her I've been sleeping on your couch. If she asks just tell her that we opened for the Stones. It's her favourite band except for the Ramones. If she happens to suggest a love based on trust and respect, tell her I've been wasted since last week."

1. Kings of Leon- You already know about these guys, right? Right?

Check out: Sex on Fire, Use Somebody

I loathe you both.

I love Stepping Stone by Duffy and of course Sex on Fire by Kings of Leon. Good picks!

Manhattan is the best song on the new Kings of Leon CD. Check it out