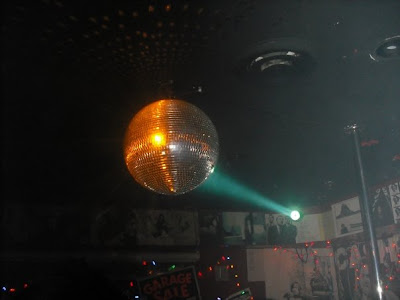 ...And I mean that in the most literal sense. As in: "I was at this exact party in 1999".
My friends and I have this running joke that we've been stuck in some kind of a time warp that has kept us acting as if we were 19 for the past 10 years. And it's true; the way we act does look a lot like the way we might have acted some 10 years ago. Sure, these days we have a little more money to throw around, and we tend to get into a little less trouble with the law, but on the whole, it's basically the same group of high school buddies going out every weekend, binge drinking as if we were sharing a case of Maximum Ice in a poorly lit suburban park, running with the same jokes that were funny during the Clinton administration, and basically acting like a bunch of drunken assholes. Some people find this brand of camaraderie charming. Others say we should move on with our lives. Make new friends. Grow up.
We generally don't see much of those who suggest the latter.

Nowhere was this discrepancy between age and maturity more evident than on New Year's Eve. Because I am 30 years old. And believe me when I say that I most certainly did not act like a 30 year old on this night. Not even close.
Sure, I breifly attended a few functions that were becoming of a man of my advancing years.
There was a pre-dinner party with hors d'oeuvres and suitably pleasant mood music at a friend's house. There was a newborn baby, some married couples, some friends that were newly engaged. The host was wearing an apron. It was a pleasant setting, to be sure. We left after 20 minutes.
There was a highly civilized dinner party for another friend's birthday that was beautifully prepared with all of the accoutrements you might expect from such a classy affair, including candles and quiet music. The dinner was top notch, and the conversation only veered into the realm of inappropriateness a dozen or so times. (It is probably worth mentioning that this dinner party took place at my buddy's mom's house, and that we have been attending this function every year since his 15th birthday. Whether that fact makes us more or less mature is open for debate.)
There was yet another civilized party that we dropped in on at the house of a married couple we know. There were plenty of hors d'oeuvres and happy couples. There was even a Karaoke machine. It had all of the makings of a very enjoyable evening... But we only stayed at this particular party for half an hour. We needed to get back to Toronto. There was a time warp awaiting. We needed to dial in to 1999.

Our designated driver (God bless her soul) drove us back to the city, and we dropped off the car. We proceeded to drink in public on our walk to the subway, and then again while riding the subway. We arrived at the bar (The Underground Garage) shortly after 11pm. A friend had rented out this particular bar for a private party, and it warrants mentioning that we had previously attended a private New Year's Eve party in this exact bar in the year... you guessed it: 1999. You really can't make this stuff up.
So what do you do when you're 30 years old and you enter a bar 30 minutes prior to midnight on New Year's Eve? You proceed to drink yourself into complete and utter oblivion with a bunch of 30 year olds who are also under the impression that it is 1999.
In all honesty, this was one of those legendary New Year's Eve parties that goes way beyond raucous. It was triple-fisting bottles of Labatt 50 all night long. It was endless rounds of Jagermeister, Sambuca, and Liquid Cocaine. It was completely inappropriate comments at unbelievably inappropriate times (when I complemented a pregnant friend by telling her how great she looked, my buddy Foley - celebrating his 29th birthday on this night - shot back with the greatest line in the history of primetime television: "Now Drew, I'll be the first to admit that I often think of pregnant women while disgracing my body in the shower, but to actually date one?? That's just perverted"). It was couples going at it on the dance floor like Spike and Shane on Degrassi. It was rocking out to the band as they cranked out Tom Petty and Big Wreck covers. It was bumping into TSN's own Jennifer Hedger, engaging in a boderline meaningful conversation, and then having said conversation hijacked by my endlessly-networking brother. It was calling my parents at 2:30 in the morning and serenading them with whatever song the band happened to be playing at that time (my dad hung up halfway through the phone call, unbeknownst to us as we kept wailing away. His response to our well-wishes when I spoke to him today? "That was fucked up..."). It was drunkenness to the point of tears. And it was stumbling out of the bar at 3 o'clock in the morning and walking home alone in -15 degree weather, falling flat on my ass on Queen Street because my Cherry Docs were completely unsuitable for snowy conditions, and because my condition was somewhere between weaving-into-oncoming-traffic and comatose.
In short, it was everything New Year's Eve is supposed to be.

And not that there's anything wrong with candles, kids, quiet music, and hors d'oeuvres; it's just that those things weren't really my bag in 1999. And as far as I can tell, it's going to be 1999 in my world for quite some time to come.

One more NYE note:
I love the text messages and voicemails that are exchanged every New Year's Eve. The best of the night came from my buddy Sweet Nate (he of The Boozy Call fame). A bunch of my "grown-up" highschool buddies attended one of the civilized, mature parties that you might expect people approaching middle age to attend on New Year's Eve. And in his message, he had me completely sold on his whole grown-up status. His message was sombre, profound, heartfelt, meaningful... All of it... Right up until the very end:

All my groomsmen are here... Four of them: Damen, Stinky, Skeeter, Phatty... You're the missing link... I pause, because I'm smoking a cigar... I love you to death. I love you. I love your family. You're important to me... Happy New Year, brother... I will see you in the new year. You are gonna be the man at my wedding. Make some notes. Take them mentally... Maybe a slide show. We'll be in touch... I love you. All the best for 2009...... I hope your penis gets bigger.

I couldn't be happier about the fact that there's still a trace of 1999 coursing through his veins.
Posted by Sean McCallum at 7:02 p.m.

Lost in the shuffle was the most excellent name of the band that night: "Stifler's Mom"

"We've been coming to the same party for 12 years now, and in no way is that depressing."

Sean I meant everything I said.