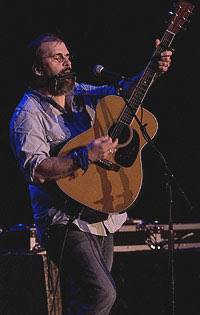 My first memories of Steve Earle's music come in the form of my travelling with my dad, late at night, in an old motorhome we used to have. For some reason it always seemed like we were the last two awake, cruising down some lonesome highway with the rest of the family sleeping in the back. With me riding shotgun, he'd always let me go through the briefcase full of casette tapes he had, and invariably I'd always wind up picking that Copperhead Road album. There was just something inexplicably right about listeneing to the Hardcore Troubadour as the miles rushed past late at night as we drove deep into the American South.

Fifteen, sixteen, seventeen years later, and that fourth album of Steve Earle's; now remarkably twenty years old but as timeless and relevant today as it was back in '88; is still one of my all-time favourite albums, easily landing in a top-10 list that has yet to be fully compiled.

Having been introduced to Steve Earle and the Dukes by my dad (as I was introduced to most of the music that has stayed with me over the years), it was only fitting that I was taking him along with me to see the Hardcore Troubadour at what, for all intents and purposes, is the finest musical venue in Canada.

We arrived at Massey Hall at eight o'clock on the button after a few Steam Whistles and a run through of Guitar Town on the turntable at my place, the result of which may or may not have been responsible for my forgetting the tickets (as we stood waiting for the College streetcar I realized, in a rush of panic, that they were still on my bureau). My buddy Browner had gotten us the tickets, so it came as no surprise that the seats were phenomenal: second deck, dead centre. Massey Hall is such an intimate venue that it felt like you could reach out and touch Allison Moorer,the surprise opening act, and Steve's ridiculously attractive and talented wife (his sixth, for the record; as he put it this time around: "I know, I'm hopelessly overmarried"). In any event, Moorer acquitted herself well, playing a number of tunes from her new disc Mockingbird, including Joni Mitchell's Both Sides Now, much to the crowd's delight.
During the intermission (of which I'm a huge fan, for the record. I think all shows should have an intermission), my dad and I met up with Browner and his buddy for a bevvy in the second level "Steve Earle Lounge" (a quasi-jab at the somewhat pretentious notion of having an "E Street Lounge" at the Springsteen show... not quite backstage passes because you're not hanging out with the band, but still sufficiently semi-exclusive... ugh) before venturing back inside for the show.
This was my first time catching Steve Earle live, and I have to admit that I was completely blown away by how good a guitar player he is. You expect the guy to be good, but this was nothing short of a finger-picking clinic. It always boggles my mind, being as musically illiterate as I am, how one man can make a single guitar sound like that... And when that unmistakable voice of his; the embodiment of all things country, rock, folk, soul, roots, and blues; filled that grand old Hall with the opening to lines to Steve's Last Ramble, you knew that we were in for something special.
The best way to describe the Troubadour onstage is to say that he picks up where Springsteen has left off, doing all of those things Springsteen used to do, and providing the audience with a level of intimacy and interaction that seems to have escaped the Boss in recent years.
Perhaps nothing signifies this notion more than the fact that he dedicated the show "to the memory of Jeff Healey", and then played a heartbreaking version of "My Old Friend The Blues". We were eating out of his hand from that point on.
Before playing Now She's Gone, Steve dedicated the song "to what's her name, wherever she is", making an obvious allusion to his well-documented failures in marriage (he's been married seven times, to six women... yep, married one of them twice). As soon as he finished that track, he switched harmonicas and flatly stated: "Same girl... Different harmonica..." to uproarious laughter. Some girls just scar you, I guess. The version of Goodbye he played in the aftermath was one of the saddest songs I've ever heard, and you could have literally heard a pin drop in that place. It was the epitome of heartache, and it was perfect.
One of the great things about Massey Hall is that it's so intimate and acoustically sound that you can hear everything, meaning that people are basically having ad hoc conversations with the performer on stage between songs. This led to one of my favourite moments of the night, as Earle said: “Y’know, you grow up and get a guitar ‘cause you want the girls to scream at you, but at my shows it’s always the guys who scream.” As if on cue, as soon as the laughter subsided, some dude in the audience with the deepest baritone voice you can imagine boomed: "WE LOVE YOU STEVE!!!" Too funny.
On his new album, Washington Square Serenade, Steve got to experimenting with some electro beats, and to complement these tracks on this tour, he regularly brings out Neil MacDonald to provide the beats on the wheels of steel about halfway through the show. I think that working the turntables could probably work for a couple of the tracks (most notably City of Imigrants, which is an aboslutely killer tune that Steve introduced by talking about the U.S.'s obsession with trying to keep immigrants out {Earle sees the gov't using this issue as a form of distraction from the real issues plaguing his homeland}, even though every great city and civilization was created by and for immigrants); but on the whole, I think that the overpowering beats took away from what Steve was doing on stage. They had the affect of alienating the audience to a large degree, drowning out not only Earle's ridiculously good guitar playing, but also much of the message he was delivering in each song. I'm not saying the beats should be taken out of the show entirely (they complemented Way Down In The Hole beautifully, giving it that Waitsian effect{Earle plays the song for the opening credits of The Wire in Season 5 - he also stars as Waylon, the recovering Herion addict in a number of episodes}), but that they should probably be scaled back a little.

Because where Steve Earle is at his absolute best is when he is up on stage with his guitar and his harmonica, singing his beautifully crafted songs like the hardened troubadour he is. Nowhere was this more evident than in his rendition of Billy Austin, a huanting and touching ballad about a young man on death row. The song is brilliantly written, and when performed before a silenced crowd, it is a chilling indictment of the institution of the death penalty. As my buddy Browner astutely observed: "Steve Earle has to be the most well informed Texan with an eighth grade education alive". Undoubtedly.
Other highlights from the show included a phenonmenally raucous one-man version of The Galway Girl, with Steve Earle showing his Irish lineage by completely rocking out on the mandolin. I had never heard The Galway Girl before, but that version has to be right up there with Johnny Come Lately (done with The Pogues on Copperhead Road) as an instant St. Patrick's Day classic. The duets with his wife Allison were a nice touch, and you really get the feeling that this is a marriage that has a chance (you know what they say: 7th time is the charm!).

Finally, one of the last songs Earle did was Little Rock and Roller, a song he wrote for his son more than twenty years ago. He introduced the song by talking at length about how hard it was being away from his kids when he was on the road all of those years, and how maybe he wasn't the best dad in the world for those reasons and for a whole bunch of other reasons (Earle's problems with substance abuse have been well documented)... And then he wrapped it all up by talking about his own dad, and how, unlike himself, his dad was always there; for him, for his kids, for everyone... Unfortunately, Earle's dad passed away just after Christmas this year, and you could really tell that the family has had a tough time trying to deal with it... Steve then went on to dedicate the song to his sons, his brothers and sisters, and to his dad: Jack Dublin Earle.
It was one of the most touching concert moments I've ever had the pleasure of being a part of. And it made me thankful that I was able to share it with my own dad.
Toronto Sun's Review
Eye Weekly's Review
Toronto Star's Review
Posted by Sean McCallum at 7:39 p.m.

Great review! It was a good read. Very sad news about Jack Earle. I had the pleasure to meet him and share many emails with him. He was so proud of Steve and it always showed.