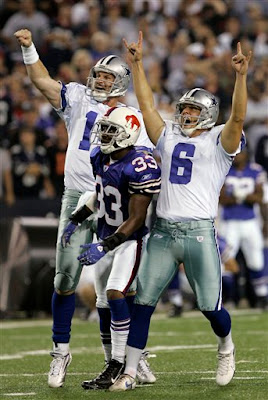 I think that this one will go down right along with the Scott Norwood missed FG and last time the Bills played a meaningful game in December (you might recall something about the Tenessee Titans throwing a forward pass that the officials somehow ruled a lateral). The Monday nighter tonight nearly killed me. I'm sitting here waiting for the post game press conference, returning text messages from heartbroken fellow Bills fans, and half expecting Dick Jauron to stand up at the podium so he can scream "THE COWBOYS ARE WHO WE THOUGHT THEY WERE!!!" before pounding his fist on the podium and walking away in disgust.

This had all of the makings of a magical night. Jim Kelly and Thurman Thomas on the sidelines, a promising rookie quaterback doing his best Tom Brady impression, and a national television audience with whom to share the goosebump-inducing experience. Five picks, a fumble recovery, and a kick-off return later, it seemed like this would finally be the game where the Bills turned the corner. Hell, even Jaws was waxing poetic about his Lackawana youth. I had the perfect entry all ready to go, complete with video of the Chris Kelsay INT TD and a headline ushering in the Trent Edwards era... But then the absolute worst case scenario began to unfold.

First the Edwards interception inside the 15 when a field goal would have essentially sealed the game, only to be followed by the jubilation of the DiGiorgio pick immediately thereafter. And then the Romo drive inside two minutes that absolutely ripped my heart out, only to be followed by the elation of watching T.O. drop the two point conversion... As my buddy Foley put it: "I now know what it feels like to be a heroin addict. Triumphant and manic jubilation followed by bouts of extreme depression". And then that miracle on-side kick that the Bills inexplicably botched, followed by an impossible three play drive that culminated in an all-time freeze job by Jauron, only to be outdone by the rookie kicker nailing a 53-yarder as time expires...

There really are no words to describe what it feels like to be a fan of this franchise. I'm pretty sure there will be a mass suicide going on in the Queen City tonight. And it would be hard to blame anyone.

This was supposed to be the game we finally got to stick it to Wade Phillips for inexplicably benching Doug Flutie for Rob Johnson on the last day of the '99 regular season and then unconscionably starting Johnson in the Music City Miracle game. This was supposed to be the game that Kelly and Thomas passed the torch on to Edwards and Lynch. And this was supposed to be that one game where the Bills were finally able to hold on to win one that mattered, unlike so many other times where they end up heart-breakingly choking it away in the dying seconds (has any football team lost as many games in the last five seconds as the Buffalo Bills? Scott Norwood. The forward pass. Byron Leftwich in 2004. Jason Elam hitting that opening-day field goal with no time left four weeks ago... and now this... it's just too much).

In The Sports Guy's Levels of Losing, this one has to rate as a no-brainer Stomach Punch. All of the symptoms are there: "any roller-coaster game that ends with (A) an opponent making a pivotal (sometimes improbable) play or (B) one of your guys failing in the clutch. ... Usually ends with fans filing out after the game in stunned disbelief, if they can even move at all. ... Always haunting, sometimes scarring."

There is nothing more excruciating than being a fan of the Buffalo Bills. And tonight was just another night in the long and storied life of...

Speaking of that Monday night game, Rob from Buffalo weights in: "I'm stuck in a prison. I have a 350-pound cellmate who does terrible things to me. He doesn't do them frequently. No. It happens maybe once every six months or so. He holds off just long enough for me to hope things will be different, that it'll never happen again. I have a life sentence with no chance of parole. As does my 350-pound cellmate. And there are additional beds in this cell so God knows what's coming. I'm scared. Of course, I'm not really a prisoner. I lead a seemingly normal life with the exception that I'm a fan of Buffalo sports teams. Could I plead Buffalo-sports related insanity for murdering my dad -- he who bestowed this lifetime of hell upon me? I'm pleading for help. I just want it all to end."

(Ladies and gentleman, the Buffalo Bills!)

- Taken from the column "Magical Times in Beantown", by Bill Simmons