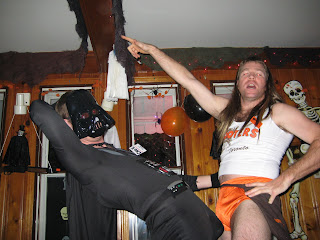 As with the vast majority of Halloween party recaps, I will be allowing the photos to do most of the talking here. So be forwarned: there will be multiple disturbing images of your favo 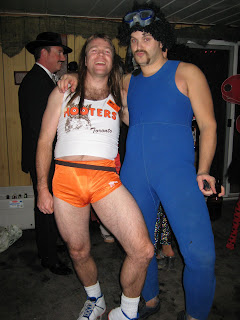 urite blogger dressed as a transvestite Hooter's waitress, many in the ilk of the annual protective-cup-touching shot, as seen above. Yes, it was that kind of night.
And it began sometime around 9 when we arrived at DVZ and Sheera's, where Danny Boy was dressed like a cross between Jacques Cousteau and the human embodiment of a pair of moose knuckles... Not exactly the prettiest sight in the world, but then again, I was wearing a Hooter's waitress outfit, size extra-small, so really who am I to judge? The lovely Sheera was stunning as always, dressed this year as a Foxy Cleopatra hybrid, and their pad, as I've mentioned before, was done to the nines.

We'd had a couple of beers at my buddy Skeeter's place beforehand, which was essential to me being able to show up in that ridiculously disturbing outfit, and let me tell you, there were more than a few snaps taken, with extreme crotch-thrusting an absolute must. My favourite is of the Doc asking me to turn my head and cough. There was also some girl I've never met before (she may or may not h 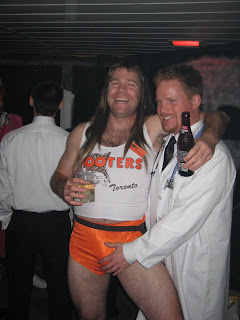 ave been the lovely lady doling out the humvees like they were all-star game fan voting ballots in the bathroom two years before) who took at least 15 closeup shots of my junk, unable to believe that I would show up at a party so exposed (she failed to grasp the idea that I might actucally be wearing something to disguise my Irish passport). In any event, I think it's safe to say that I at least managed to equal my disturbing hideousness of years past.

(The line of the night came from a man by the name of Robbie Doon, who walked into the party, took one look at my disgusting self, and promptly proclaimed: "Honestly? I've fucked worse.")

The party pretty well progressed from there in the way that most parties do, with the massive intake of alcohol (including via the house skull funnel), and some raucous tunes. There was a husband and wife combo dressed as duelling Peg Bundies (brilliant, in my opinion), which actually led to a nearly unforgivable gaff on my part. The "man" Peg had a beau 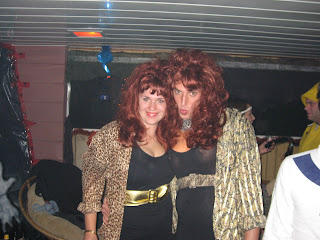 tiful set of fake breasts that I took great pride in squeezing at every opportunity. Of course, as the night wore on and I became increasingly more intoxicated, the distinction between the two Pegs became increasingly more difficult to discern, until at one point, after my eleventh beverage, I actually reached out for a handful of the real Peg... only to stop myself at the last minute, which was probably in everybody's best interest because the last thing anyone wanted was a pair of drunken transvestites duking it out amongst the glasses of spiked punch and the mini Snickers bars.

But the absolute highlight of the night, for me at least, came in the form of my little cousin getting his groove on. I have to tell you that my cousin; affectionately known to the rest of the civilized world as 'Little Buddy'; hasn't exactly had the world's greatest record of success with the ladies. Great guy. Salt of the earth. But I guess sometimes he just comes on a little too strong. It probably doesn't help that he's about seven years younger than everyone else either. But I digress.

So anyway, we're nearing the end of the evening, and there are only a few 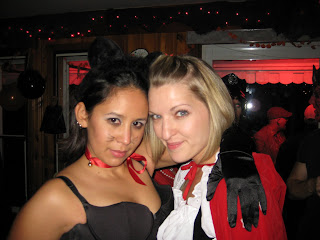 single ladies left, along with a slew of about a dozen single dudes. Everybody is standing around, doing the run-of-the-mill party thing, at which point J.T.'s Sexyback comes blaring through the system. The temperature may or may not have dipped below freezing in hades in that moment, but all I know is that Little Buddy took one of these two lovely ladies out onto the dance floor; a dancefloor surrounded by a stunned and disbelieving group of dudes, no less; and proceeded to put on an absolute grinding clinic, complete with Junior High caliber snogging. It was the stuff of legends.

And here's the thing: it's not as if this girl were only slightly out of his league. The only way I could describe it that night was to endlessly repeat that it was the dancefloor equivalent of Nuke LaLoosh getting called up to the show directly from A ball.

It was inexplicable. It was improbable. It was unprecedented. It was Kirk Gibson taking Eck deep in Game 1. It was Ron Artest running into the stands. It was Broadway Joe making a pass at Suzy Kolber. It was all of those things combined, times a thousand, and it may have been the single proudest moment of my life.

Here are some of the other highlights, in the form of costumes, from Saturday night: 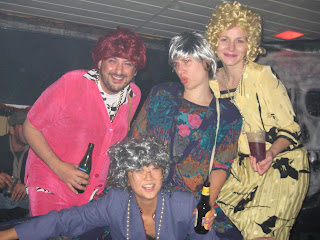 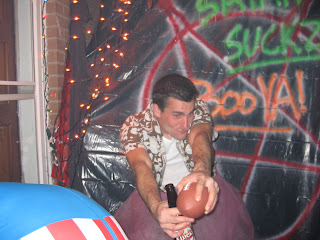 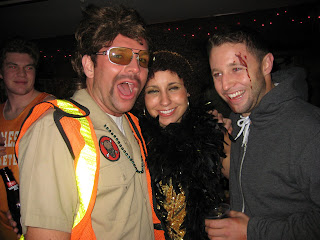 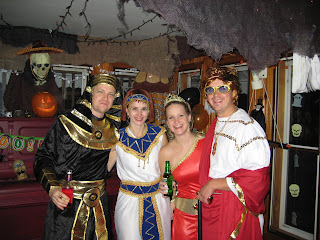 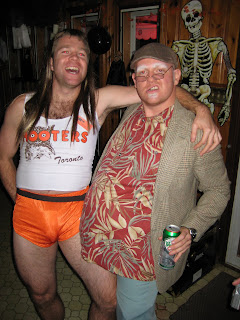 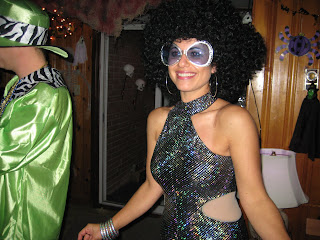 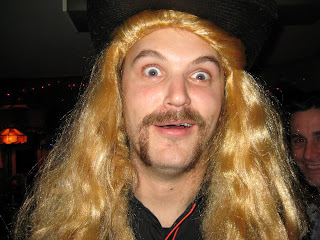 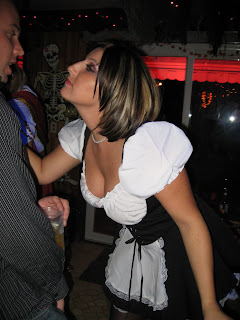 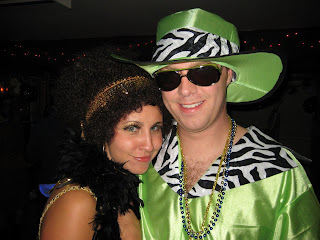 Okay Sean, I have to ask...was these some Hooter's waitress running around naked last Saturday night cuz you stole her uni?

They as well tried and true to highlight the positives, by discussing
the increased videos from this class uploaded to the Group discussion
YouTube Report. A different type of bariatric operating theater may
be a sedentary life style? So how of penis magnification procedures are operating theatre, pumps or hanging
weights.

Check out my site: Http://Volumepillsexposed.com/