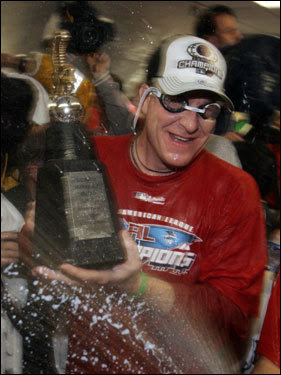 The worst development in sports over the past 25 years has nothing to do with HGH, strip club shootings, or dog fighting. Nope. Hands down, the worst trend in sports is goggles in the dressing room. 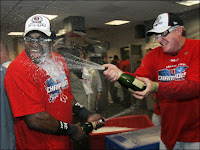 I honestly didn't think that anything could ever top the "inexplicably bringing your kids into the dressing room" for the title of most shameless way to cheapen a team celebration, but this recent trend towards wearing goggles in the champagne-spraying festivities is utterly indefensible.


Twenty years from now, somebody is going to look at that picture of Curt Shilling holding the American League Championship trophy and think it's Chris Sabo.
Why the hell would you ever want to have yourself enshrined in this moment forever looking like a member of the Russian Synchronized Swimming team? When I was a kid, w 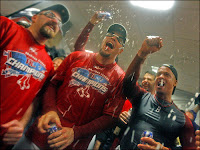 atching the guys get sprayed in the face with champagne and then trying to conduct an interview with their eyes burning, that was the absolute best part of the post game celebration... well, that, and when they'd dump beer all over Bob Costas. But now? These guys look absolutely ridiculous.

Which brings me to my World Series prediction.

There is no way in hell the Red Sox are beating the Rockies in this series. Just take a look at that picture with Hinske wearing those goggles. I mean, the fact that this is a team with Eric Hinske on the roster should be enough to sway you to the Rocks, but beyond that, going thro 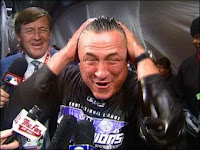 ugh all of the post-game celebration pics, the Sox are wearing goggles in every single shot. The Rockies? At least half of the guys are man enough to go goggle-less, including their manager, Clint Hurdle. I'll take a leader willing to risk his eyesight anyday.


And I'll take a team who's willing to man up and relish the sting of victory over a bunch of guys who would willingly and shamelessly degrade themselves for all eternity just so their eyes don't hurt in the morning.


Another reason to like the Rockies in this series? I managed to find a shot of Jeff F 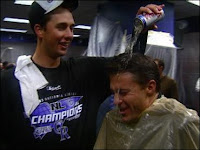 rancis dousing a reporter (CBS' Vic Lombardi) with beer. That's a good Canadian kid who would never dream of sporting goggles during the most thrilling, spontaneous celebration of his young life. These are guys I want to go into battle with.


(Editor's Note: I have never been part of a World Series champagne celebration, or even a lesser equivalent. To say that I wasn't a good enough athlete to qualify would be a little like saying David Hasselhoff's version of Hooked on a Feeling falls slightly short of the original.)
Posted by Sean McCallum at 12:16 p.m.

The Hoff singing "Hooked on a Feeling"? Where do you find this shit?? It's genius.

I have just downloaded iStripper, so I can have the best virtual strippers on my desktop.