Gurf Morlix at The Dakota Tavern 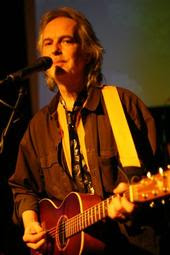 If you were to listen to Gurf Morlix's Blanket just once (a song inspired by the death of Warren Zevon and the dignified way in which he left this world), my bet is that it would be impossible for you not to fall in love with it. It's one of those songs that gets you in that unknowable place that you can't even name, and if it ever leaves you at all, it leaves you feeling drained and overcome. It really is that good.

(The only online version I could find was a two-minute snippet. Click HERE and go to the 4th song, entitled "Blanket")

So that's what I was going on on Tuesday night when I walked in to The Dakota Tavern: this one amazing song, and the feeling that we might be in for something special. I couldn't have been more clairvoyant if I tried.

Gurf has worked with the likes of Lucinda Williams and Patty Griffin, two of the all-time alt-country darlings, and he's been affectionately described as a "Hillbilly Warren Zevon", those two facts making my attendance a virtual no-brainer. And there are few better places to see folk-inspired music than The Dakota Tavern... and it's a three minute walk from my house. A perfect storm of musical bliss.

We arrived about 5 minutes into the first set, and one of the first songs he played was Blanket, which on its own merit was worth the price of admission. I didn't think it would be possible to top the album version (with Patty Griffin singing background vocals), but this came damn close. He followed it up with Food, Water, Shelter & Love, a beautiful song inspired by the Spike Lee documentary "When The Levees Broke", and a tune that has been deservedly receiving considerable airplay as of late on the greatest invention since penicillin, Sirius Disorder 70.

Gurf's voice is raw, ragged, and gritty, and his songs are stripped down to the core of what matters... poetic in that Hemingway's The Sun Also Rises, bare-bones-stuff-of-life tradition. Every word caries significance, and none is ever wasted. Up on stage, the man shows traces of Steve Earle and John Prine, and he was working his boot on the board to the beat like a young Tom Connors. The title track from his latest album, Diamonds to Dust, was unbelievable done acoustically; again, stripped down to its bare minimum it carries more weight than you can imagine:

Birth to boneyard, boom to bust
Everything falls apart like it must
Stone to sand, iron to rust
Daylight to darkness
Diamonds to dust

That is beautiful stuff right there. He did a commendable cover of Dylan's With God on Our Side; a song, as Gurf aptly points out, that is every bit as relevant today as it was when it was written 40 years ago... and maybe even more so. I never quite listened to that song the same way as I did when Gurf sung it up on stage at The Dakota, and for my money, anyone who can take a Dylan song and make you listen to it for the first time all over again... That's something special.

The indisputable highlight of the show for me was a song called Cold, Cold World. It was written by Blaze Foley, a notorious and legendary Austin songwriter, and an old friend of Gurf's. Morlix explained his history with Blaze (including a tragically comical account of how a drunken Blaze inadvertently taped over the one and only existing copy of a session the two of them had recorded that was supposed to one day become their album) and how Blaze was murdered in 1989, to almost no one's surprise. Gurf then broke into this song that Blaze had written, and it absolutely broke my heart. It was slow and beautiful and poetic, and by the time it was over I had tears in my eyes and a lump in my throat the size of a softball. It was one of the great live performances I've ever had the privilege of being a part of.

Apparently the track can be found on the 2006 album entitled Cold Cold World, which you can rest assured I will be adding to my collection shortly.

It was one of those magical nights that you never could have anticipated, nor could you ever forget. I had to go up and shake the man's hand after he finished his last set, gushing on about how he absolutely blew me away. I have no idea when he plans on visiting our fair city again, but needless to say that when he does, I'll be there front and centre. Do yourself a favour and try to do the same.

Thanks Sean. That's a pretty fine review. I LOVED the Dakota, and will be back sometime next summer. I spend my summers in Ontario, so you ain't seen the last of me.