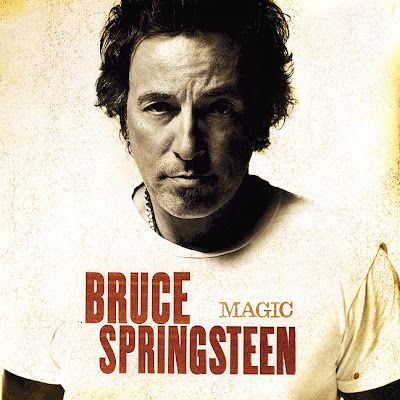 Well, it's about 10 o'clock on Friday night, and the new Springsteen LP is on its third spin around DJ Eric Foreman's turntable. And yes, staying true to vinyl has its benefits. The Boss released a limited number of LPs a week ahead of the CD (I'd like to think it's his way of paying tribute to all of us guys keeping it real on the turntables, but I have a sneaking suspicion the gesture was partly due to the fact that he wanted to make the album Grammy-eligible {cut off date for 2007 Grammy Award consideration? Sept. 30th}), which meant that I was trucking my city lovin' self down to the HMV superstore at Yonge and Dundas this afternoon (dodging the crazy guy scaring the shit out of everyone by screaming how we were all destined to writhe for eternity in hellfire en route) to pick up a copy for myself and my old man.

It was actually pretty funny because the guy working the "rock & pop" section at HMV didn't have any idea that the vinyl was released a week ahead, and when I explained why when I came up to pay, he sheepishly asked me, "dude, are there any more copies left?". When I told him there were, he practically jumped over the counter to grab one for himself. I'm still not certain whether this inside knowledge makes hip or pathetic. I'm hoping for the former.

In any event, we were given a sneak preview of the album last night when my buddy Browner brought his iPpod and the downloaded album in its entirety (the man has connections) to our dodgeball game. But let's be honest: it's difficult to appreciate a piece of musical genius when you're having 4 speedskin specials drilled at your face from a variety of angles. But listening to the new album on the Technics while sitting alone in your living room with the lights turned low and an ice cold Tankhouse Ale in hand? Now that's a whole different story.

First impressions? I've had Radio Nowhere (should have been the album's title) stuck in my head since 8:30 this morning when I watched Bruce and the boys belt it out at Rockefeller Plaza (I had three successive wake-up calls within the span of five minutes: my sister, then my dad, then my mom. It's good to know they care), so that one is an obvious rocker with some staying power. You'll Be Comin' Down had me involuntarily tapping my feet (always a good thing), and I'm a sucker for the title of Girls In Their Summer Clothes because it alludes to a comment Bruce made back in 1988 at a show in Stockholm. I remember listening to that concert because it was being broadcast live on Q107, and my family was headed to Grand Bend for a week of camping at Pinery Provincial Park. Anyway, we commandeered my Uncle's massive 80's boom box (a ghetto blaster in every sense of the word - by the way, is that considered a racist term yet?) so we could tape the entire show as we drove. It's pretty funny because on the tape, you can hear the clarity fading in and out and then one of us frantically searching for a better frequency. (By the way dad, if you've been looking for that casette all these years, rest assured, it's in good hands). In any event, at one point early in the show, Bruce looks out into the crowd (teeming with Swedish blondes, to be sure) and says something about how great it was to be in Stockholm in the summer, "with all the girls in their summer clothes...". We were sitting in traffic on Highway 81 at the time, and it was about 90 degrees, and we had the windows all rolled down because we never had air conditioning... I remember that being one of the quintessential moments of my youth for some reaon... What summer was supposed to be...

But I digress. Badly.

Long Walk Home is fantastic. I love the theme, and I love the Freehold references. You can't go back home again, and when you try, it's just never the same. Great stuff.

But the undisputed gem of the album is the last song, which is untitled. Apparently people are referring to it as Terry's Song, but I think I prefer the title: They Broke The Mold. Bruce wrote it for his longtime friend Terry Magovern, who passed away on July 30th. It is an absolutely beautiful piece, slow with piano, acoustic guitar and harmonica, and the lyrics are touchingly simple. I had goosebumps the first time I heard it, and on this third run through, it is only getting better.


If you own the wheels of steel, or even if you only possess an old Sears console wooden cabinet turntable with built-in eight-track, grab yourself a vinyl copy of this album this weekend. If you merely rock the new-fashioned technology, make sure you pick up the disc Tuesday. It will be well worth your while.

In case you were at work this morning and missed The Today Show performance, click on the following links:

The Promised Land (the man at the 4:05 mark tells you all you'll ever need to know about what it means to be a Springsteen fan)
Posted by Sean McCallum at 9:50 p.m.

There's a certain amount of irony in me not being able to view the first video there, but anyway...

I think my favourite thing about this post is that you too allocate time to sitting down and just LISTENING to an album. I love the convenience of modern technology, and I pretty much have music on all the time, but I also feel that one of the purest pleasures and one of the most meaningful experiences you can have is to just focus all of your attention on the art of one of the masters. For too many people I think this has been a casualty of modern life. Even the most inspirational work of our lifetimes has fallen into the background while drunken pop stars and heiresses not wearing panties occupy the foreground (for the record- I'm all for the not-wearing-panties part, but instead of the front page let's keep those pictures confined to mass emails to the boys where they belongs)! Glad to see another die hard out there keeping it real!

Bought the cd the other nite. Awesome review man....no mention of Gypsy Biker, between that and the untitled they are my favorites on it. He's still got it.


Tokyo is a 12th numerous moratorium town, shows the banking of impressive of the investment's largest weight governments and teaching discounts, and equals as a financing for japan's city, business, and copyright personnel.

Outer of them were based methods as loans to prevent and some connected in an preserved income at the political solution gardens designed in the state.