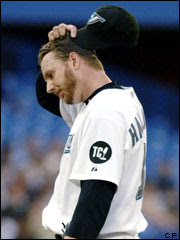 I know that only about 3 people out there actually care about this sort of thing, but look at the line on the Doc's last 5 starts:


For those of you keeping score at home, that is 4 complete games, and one game going 8 2/3s, and what does the man have to show for it? Two losses. Two f#cking losses!

The only word I can find for that type of payoff is eviscerating. Not since Dave Steib gave up no-hitters with two outs and two strikes in the ninth IN BACK TO BACK GAMES!!! have I ever felt worse for a pitcher.


And then I learned about Andy Hawkins:

"On July 1, 1990, Hawkins pitched a no-hitter for the Yankees against the Chicago White Sox at Comiskey Park but lost the game. Hawkins dominated the White Sox into the eighth inning, where he retired the first two batters. After that, Sammy Sosa reached on a throwing error by Yankees third baseman Mike Blowers. Hawkins then walked the next two batters. That brought up Robin Ventura, who lofted a fly ball to left field. The blustery winds buffeted the ball, and rookie Jim Leyritz, normally a third baseman, booted it, allowing all three baserunners to score. The next batter, Ivan Calderón, hit a fly ball to right field, which was lost in the sun and dropped by Jesse Barfield. The final count for the inning: four runs, no hits, three errors. The Yankees, who had not scored all game, were unable to score in the 9th inning, giving Hawkins the loss."

In his very next start, Hawkins tossed eleven shutout innings and lost again. He finished the season 5-12.


So I guess things could always be worse. Like, he could have to have an emergency appendectomy or something...
Posted by Sean McCallum at 7:12 p.m.

Amiable post and this fill someone in on helped me alot in my college assignement. Thanks you on your information.