The Coolest Street in the World this week 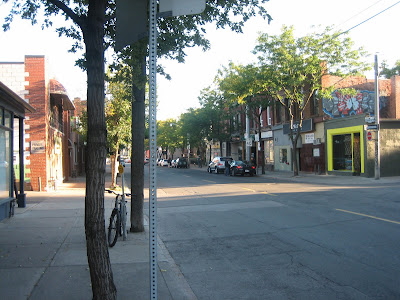 I should preface this entry by pointing out that I spent most of last night drinking Molson Stock Ale at the Bovine Sex Club, so you can take the following opinions with as many grains of salt as you wish.

The stretch of Ossington Avenue between Dundas and Queen is the new coolest street in Toronto, which by extension makes it the coolest street the world. I have been mulling this statement over for the past six months or so, but after spending yesterday, last night, and then again this morning walking up and down that same stretch of beat up old garages and graffiti glazed storefronts intermingling with classy exposed-brick-and-beam bistro-like bars and funky art galleries, I can safely say that this is my new favourite part of the city.

It starts at the corner of Dundas and Ossington with the Dakota Tavern, a basement bourbon celler-esque honky-tonk saloon with serious hoe down potential (probably the best place to see Toronto's up and coming alt-country acts, including Luke Doucette and the "Steers and Queers" variety show), and works its way down to Sweaty Betty's, the ultra-hip Ossington hot spot that has been known to host A and D-level celebrities alike at the foot of Queen. The places in between run the gamut of everything you might and might not expect from a city street in its apogee of gentrification (it has been said that if you stand out there at just the right time, you can actually hear the area clicking over).

The other public houses that I may or may not have frequented include the exellently intimate Communist's Daughter (a converted Lunch Counter with the "Nazare Snack Bar" sign out front and the only indication of its Marxist parentage being a small chalkboard in the window) which is actually on Dundas but for all intents and purposes resides on the Ossington strip; The Crooked Star with its Tuesday night "bring your own vinyl" tradition (DJ Eric Foreman has yet to make his triumphant debut there, but it's really only a matter of time); the highly underrated Baby Dolls (for those lonely, lonely nights); the trifecta of nearly indistinguishable Korean karaoke places (Lang Van II, Lang Thang, and Vong Nguyet); and the recently opened Reposado, which has 25 different types of tequila, and had a 3-piece Jazz outfit playing Friday night. I'm telling you, I've been to entire cities without that kind of variety.

Throw in the vintage stores (Badlands, Vintage 1, I Miss You), the record store (Babel Books and Music), the killer restaurants (Foxley, Le Bar a Soup {with soup-nazi-quality fare}, Get Real Cafe {best vegetarian breakfast in Toronto}, I Deal Coffee), the beat up old garages, and the art galleries; one of which is currently displaying "The Abandoned Barbie Project" (a slew of naked Barbie dolls in the window); and you quite literally have the most eclectic half-mile in Toronto.

The only thing is, it won't be that way for long. Because that gritty, Bohemian vibe doesn't last long around here. Sometimes it feels like the Alphabet City of the early '90's, or the Parkdale of five years ago; and then the next week you would swear you were standing in the lobby of the Drake Hotel. So get there while you can. Because like I said: you can almost hear it gentrifying.
Posted by Sean McCallum at 1:49 p.m.