Top-10 Ways to Avoid The Trappings of Middle Age 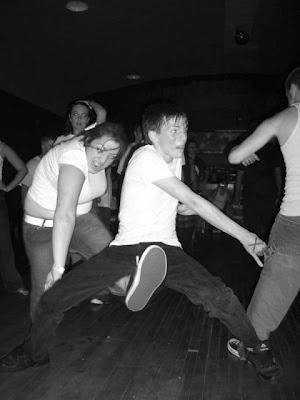 (If the above photograph isn't the world's greatest metaphor for every birthday after the age of 28, I clearly have no idea what I'm talking about)

“Well, birthdays are merely symbolic of how another year has gone by and how little we've grown. No matter how desperate we are that someday a better self will emerge, with each flicker of the candles on the cake, we know it's not to be; that for the rest of our sad, wretched, pathetic lives, this is who we are to the bitter end. Inevitably, irrevocably... Happy birthday? No such thing.”
- Jerry Seinfeld

Getting older sucks. There's really no two ways about it.
When I told my buddy Rosco that I didn't really feel like celebrating the fact that I was officially tip-toeing into the realm of middle age, he came back with the following consolation: "Hey, it's not really middle age... You're hoping to live past 60, aren't you?"
Ummm... I guess so.
And I guess there's also consolation in the fact that even though I'm supposed to be acting like someone in their 30's, I clearly avoid doing so at all costs. So it is with the mindset of endlessly deferring adulthood that I give you:

The Top-10 Ways to Avoid The Trappings of Middle Age

10 - Don't ever turn down the opportunity to take a hit from a beer bong whilst in a moving vehicle in a foreign country.

9 - Avoid following the careers of those deemed to be "young prodigies" in the fields that you yourself would have liked to have once been considered a "young prodigy" in... DAMN YOU JONATHAN SAFRAN FOER!!!

8 - Try to make a habit of getting kicked out of a bar in the wee hours of a Monday morning in a foreign city at least twice every calendar year.

7 - Alter your diet so as to allow you to continue feeling young, despite the painful reality of your advancing years. What was once the McDonald's Dollar menu, Poutine at three o'clock in the morning, Steeler Lager on a weekday afternoon, and Jim Beam stolen from your parents' liquor cabinet should now be the Subway 6-Grams-of-Fat-or-Less menu, high-fibre, beer without additives and preservatives, and expensive scotch (it is no longer OK to steal it from your parents liquor cabinet, for the record).
You really need to be thinking more along the lines of Crash Davis by this stage of the game. Consider it the Guyland equivalent to the Purina One plan.

5 - Don't ever bring up Joe Carter's home run if there exists even the slightest possibility of the other party being too young to remember exactly where they were when it happened, as doing so will result in a strong yearning to leap in front of a commuter train.

4 - Exfoliate. I hear it does wonders for your complexion.

3 - Play in a hockey league where the average player age is 46. If you're fortunate enough to have the same players returning every year, you'll be considered "young legs" for as long as you live. You might even crack the top-10 in scoring one year.

2 - Make a conscious decision to date girls who might be considered "creepily young" by some of your less-than-enlightened friends. This strategy is known in some circles as the Wooderson Corollary.

1 - Remove the "Year" from the "Birthday" section in a certain social networking website, so that when you tell people you're 29, they have no way of busting you the next morning when they add you as a friend... Not that this has ever happened to me... I'm just saying.
Posted by Sean McCallum at 8:13 p.m.