The Matrix to Toronto? 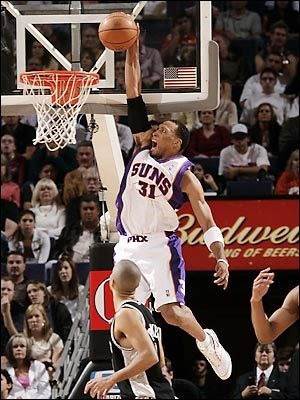 From ESPN.com:
The Toronto Raptors have agreed to send Jermaine O'Neal and Jamario Moon to the Miami Heat in exchange for Shawn Marion and Marcus Banks, league sources told ESPN The Magazine's Ric Bucher.
The deal is pending league approval, according to sources, and if approved, would be announced later Friday afternoon.

The Raptors had acquired O'Neal in the offseason, along with the rights to Nathan Jawai, from the Indiana Pacers, who got T.J. Ford, Rasho Nesterovic, Maceo Baston and a draft pick.

Marion was part of the Phoenix Suns deal in February 2008 that sent him and Banks to Miami for Shaquille O'Neal.

Marion is in the last year of a deal that will pay him $17.8 million.

Banks still has two years left on his contract, worth $4.75 million a season.

Jermaine O'Neal has one more season on his contract, worth nearly $23 million.

Call me crazy, but I like this deal. And I know that Marion is slightly overrated and overpaid at this point, but Marion could very well be the athletic 3 the Raps have been so desperately lacking. His D is solid, and most importantly, this opens up the 5 for Bargnani to play full-time.
It probably isn't enough to salvage a playoff spot, but if they can extend Marion, it's a pretty solid starting 5 moving foward. Worst case scenario is The Raps continue their implosion and wind up with a high lottery pick and some cap space.
So I'm down with The Matrix.
Posted by Sean McCallum at 2:19 p.m.