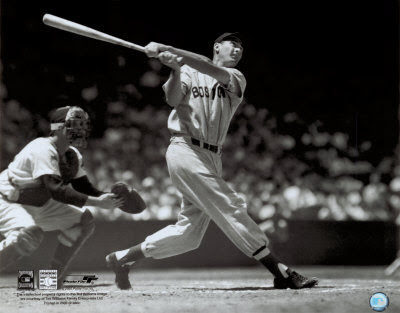 You know what? I was planning on saving this for the Friday Diversion, but fuck it. It's simply too good to withhold.

Hub Fans Bid Kid Adieu
By John Updike
In more than a few circles, this is widely considered the best little slice of sports journalism ever penned. It is almost 50 years old, but reads as fresh and relevent today as it surely did in the year before Kennedy was inaugurated. It chronicles the carreer of The Splendid Splinter, and more specifically, his last game in a Sox uniform, which took place on a cool New England afternoon, in front of only 10,454 people. How will we ever be grateful enough for the fact that John Updike happened to be one of the fortunate few in attendance?

Fenway Park, in Boston, is a lyric little bandbox of a ballpark. Everything is painted green and seems in curiously sharp focus, like the inside of an old-fashioned peeping-type Easter egg. It was built in 1912 and rebuilt in 1934, and offers, as do most Boston artifacts, a compromise between Man’s Euclidean determinations and Nature’s beguiling irregularities. Its right field is one of the deepest in the American League, while its left field is the shortest; the high left-field wall, three hundred and fifteen feet from home plate along the foul line, virtually thrusts its surface at right-handed hitters. On the afternoon of Wednesday, September 28th, as I took a seat behind third base, a uniformed groundkeeper was treading the top of this wall, picking batting-practice home runs out of the screen, like a mushroom gatherer seen in Wordsworthian perspective on the verge of a cliff. The day was overcast, chill, and uninspirational. The Boston team was the worst in twenty-seven seasons. A jangling medley of incompetent youth and aging competence, the Red Sox were finishing in seventh place only because the Kansas City Athletics had locked them out of the cellar.

But I think my favourite portrait comes in the form of Updike's description of the Sox lowly infield on this particular day:

Other than Williams’ recurrent appearances at the plate, the maladresse of the Sox infield was the sole focus of suspense; the second baseman turned every grounder into a juggling act, while the shortstop did a breathtaking impersonation of an open window.

Eat your heart out, Bill Simmons.
If you're a fan of Baseball, or of Ted Williams, or simply a fan of those with brilliant command of the English language, this is absolutely essential reading.

Thanks to Johnny D from the far, far East for passing this along.
Posted by Sean McCallum at 11:55 a.m.