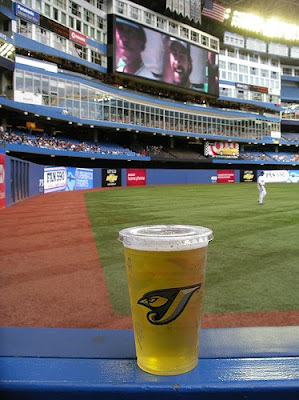 I was four Delgados deep last Thursday night during the Jays 14-3 trouncing of the New York Yankees, when I found myself thinking: "I wonder if they keep stats for the highest single game beer sales for each major league club?" (these are the thoughts you have while sitting in the 500 level, watching Marco Scutaro go 4-for-6). The more I thought of it (and the more I drank), the more convinced I became that game day beer sales are something that somebody somewhere should be keeping track of. Because when you get right down to it, if there's a stat worth keeping, it's the stat which unequivocally declares which have been the 10 drunkest crowds in your favourite team's history.

A little bit of shoddy web-based research revealed that there doesn't seem to be any kind of record keeping where record beer sales are concerned. Which is why we here at seanmccallum.com have taken it upon ourselves to do the research for you.

After gathering practically no empirical data or hard evidence whatsoever, we're pretty certain that we've come up with the indisputable top-10 drinking performances by Jays fans in the storied history of the franchise. So sit back in your favourite throwback Alfredo Griffin jersey, pour yourself an ICE COLD BEER, and take a hazy, stumbling walk down memory lane:


You're probably asking yourself: how in the name of Damaso Garcia did a meaningless game in late July that drew little more than 18,000 fans find its way onto this distinguished list of debauchery?

Believe me when I say that I was hoping to have the notorious franchise-opening snow game somewhere on this list, but some journalistic digging revealed an almost absurd tidbit regarding the franchise: You could not buy beer at a Toronto Blue Jays home game for the first 5 1/2 years of the franchise's existence. That's right. The Ontario Government banned beer sales at Jays games for some inexplicable reason. There was even a group called the "No Booze in the Ballpark Committee". As you might well expect, Toronto was the only major league franchise to have the archaic ban. Making matters even more mortifying (and inexplicable) was the fact that the franchise was owned in part by Labatt Breweries.

In any event, the Toronto Blue Jays happily stepped into the 20th century on July 30th, 1982, when Paul Godfrey himself poured the first beer in franchise history. The world's first Delgado (probably referred to as a "Barfield" at the time) sold for $1.75. 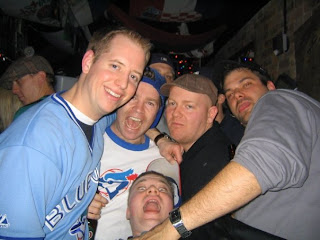 A Friday night home opener versus the Red Sox with a stadium half-filled with obnoxious, arrogant Massholes. Needless to say, a great deal of imbibing took place. From my vantage point along the third base line, it was a drinking performance of epic proportions. Fisticuffs and quasi-streaking ensued. A good time was had by all.


This was the first World Series game played on Canadian soil, and there was no doubt some serious celebrating going on in the stands. This game had it all. The U.S. Marine Corps carrying the Canadian flag the right way up; the Devon White catch and ensuing non-triple-play to Kelly Gruber; and Robbie Alomar mocking the Tomahawk Chop as he crossed the plate with the game winning run in the bottom of the ninth.

This game would have ranked much higher on the list, but I vividly remember it being absolutely impossible to get into the Skydome during the 1992 season unless you were wearing a three-piece suit, and as we all know: guys who wear suits generally drink less than guys who go shirtless. The corporate clientele for Game 3 of the Series was absolutely off the charts, meaning that there's no way that crowd was competing with...


If the crowd at Game 3 of the 1992 World Series personified the Jays' white collar fans, than surely the 46,000+ that packed Exhibition Stadium for the old yard's Swan Song represented everything working class about the Jays fan base. 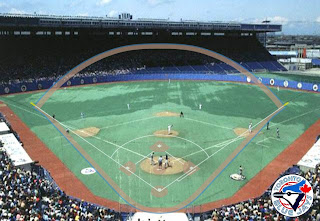 way Abner Doubleday had envisioned it (they were playing on a carpeted slab of cement that was designed to house the football team); but it was the first place I'd ever seen a ballgame, and I'll never forget seeing that brilliant shade of green (a colour I didn't even know could exist until that moment) as I walked up the concourse for the first time.

Even for all of its shortcomings, there were few places you'd rather be than at Exhibition Stadium in late August, with the CNE in full swing, the carnival lights of the Ferris Wheel and The Flyer illuminating the sky just beyond the right field fence, and the Jays in the heat of a pennant race. Not only was Exhibition Stadium the first place I ever witnessed the game of baseball; it was also the first place I ever witnessed public intoxication.

There were some world class drunks that used to inhabit Exhibition Stadium in its heyday, and they no doubt did the old girl justice at her last dance. One of my true regrets in life is not being able to be at the farewell-to-the-Ex game. The smell of vomit and urine in the right field bleachers must have been breathtaking.


You just know that there was a group of college kids at this game who decided they were going to chug a beer for every home run the Jays hit... and that they'd chug two for every one of Ernie Whitt's dingers... and three for every moonshot Rance Mulliniks deposited into the seats. 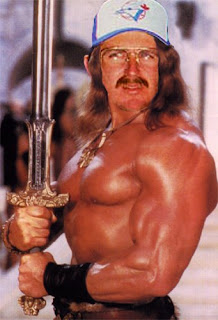 The end result? The Jays set a new MLB record for HRs in a game (10), with the bespecked one drilling two, Ernie Whitt belting a heretofore unfathomable three, and a group of college kids having their stomachs pumped as they muttered incoherently about the incompetency of the Orioles bullpen.


Back when the Jays actually used to play at home on Canada Day, the franchise set a new single game attendance record on Canada Day of 1987... And... um... Canadians typically like to drink on Canada Day. I think it's safe to say that there was some old fashioned over-serving going on in this one.

(By the way, what must have it been like for these fans to bask in the innocence of the months before the collapse of '87? I still have nightmares about Cecil Fielder trying to steal second base{CECIL FIELDER!!!}, getting thrown out by 18 steps, and then having Manny Lee triple on the very next pitch... I'm pretty sure having my dad beat me with the blunt end of a rusty axe for a few hours every day would have been less scarring... Simpler times, my friends. That's why they're called the good old days.)


I'm not sure if this was the first Friday night home opener in the franchise's history, but after it was over, I was almost positive it would be the last (who knew that they'd give us a repeat performance in 2008?).

This was baseball debauchery at its absolute best/worst. From Slash playing the National Anthems on his electric guitar and the endless obscenity-laden chants, all the way through to the later innings when people decided it would be somewhat entertaining to throw the heavy and potentially-lethal-if-thrown-at-the-proper-velocity-and-angle magnet-schedule-giveaways from the 5th deck (each and every one aimed at Manny's head, to be sure), this was one of those nights where a death inside the stadium wasn't completely out of the question, and you could just see management cringing at their miscalculation with every frisbee-like launch from the cheap seats.

I still have no idea how they opted for the Friday night opener vs. the Sox again this year...


If there's one thing I've learned in all of these years watching baseball, it is simply this: more baseball equates to more beer consumption (see exhibit A). And on August the 2nd, 1983, the Blue Jays and the Yankees, in front of over 45,000 people at Exhibition Stadium, played a hell of a lot of baseball.

Rest assured, the 45,000+ who sat there for the better part of 8 hours, drank a hell of a lot of Labatt's beer, almost single-handedly making up for the previous 5 1/2 years of prohibition-like tyranny.

For as long as I live, I will never forget the image of George Bell catching that la 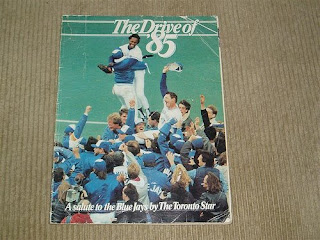 zy fly ball to left, falling to his knees, and having Tony Fernandez give him that awkward Rocky-and-Apollo-on-the-beach high five. I was 7 years old at the time, and had no idea what it meant to win the AL East pennant. The only thing I knew was that the players were piling on each other, they were spraying champagne in the dressing room, and the fans were going absolutely bonkers. I was running around the neighbourhood telling everyone that the Jays had won the World Series. That's what it felt like to me: that they'd won it all.

At the time, I imagine that's what it felt like for everyone.


If you don't think these fans were drunk when Joe Carter produced the single most important sporting moment of my life, you're kidding yourself.
Posted by Sean McCallum at 9:54 p.m.