Public Service Announcement - How To Get Married in Peru 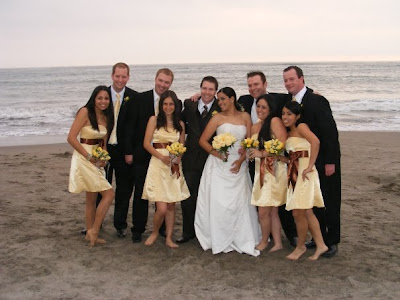 Editor's Note: This blog has sucked for the past 2 months. It's indefinsible, I know. I'm hoping that the next two entries will go a long way in explaining why. By no means will this excuse the recent lacklustre performance by the staff here, but please: have mercy on us. Guyland has been on death row.

Step 1 - Find the Right Girl
Of all of the legal and logistical hoops one has to jump through in order to get married in Peru, in a million years, I never would have thought that finding the right girl would be the easy part.
And believe me, meeting the right girl isn't easy. Particularly when you consider the fact that you could travel anywhere in the world at any given time of the year, and that you could stay in about 1,000 different hostels in Lima but somehow managed to stumble into that particular hostel on the one day that happened to be her first day on the job, multiplied by the continental/cultural/and language differences, and you begin to understand what a tightrope act of fate you're dealing with here.
And yet still, in looking back at everything involved in marrying a Peruana in Peru? This was the easy part.

Step 2 - Propose
But try to be a man about it. Yeah that's right. Real Humphrey Bogart type stuff... Wait, how do I even know about this clip?

Step 3 - Choose a Location
I know, that seems pretty obvious. But if you're getting married in Lima, you should know that the city has 43 different Districtos, and each Municipalidad has it's own set of rules, regulations, and obligatory bureaucratic procedures that must be strictly adhered to. This is where the nightmare begins.
We chose to get married at Costa Verde in Barranco. Here is the official list of requirements for a Civil Service in the Municipalidad de Barranco. It seems straightforward enough. It is infinitely more complicated.

Step 4 - Obtain Documents from Ontario Government
Bahahahaha... As every Canadian citizen knows, dealing with any level of Government is a nightmare. This proved to be no exception.
To try to circumvent the impending disaster, I went directly to the Peruvian Consulate in Toronto and asked what they felt would be the most efficient way to obtain the necessary documents (in this case, what I needed as a foreigner was: an original copy of my birth certificate; a certificate of bachelorhood; a valid passport). I already had the valid passport, so this figured to be a piece of cake.
As you might guess, it was the exact opposite. I ordered the birth certificate online. It cost $35.00 and arrived by mail within 15 business days. All things considered, this was a success. I even had this shiny new birth certificate with me when I went into the Peruvian Consulate so they could legalize it. The dude working there said I didn't need to do that. This was getting easier by the day.
The only thing left to do was to obtain a certificate of bachelorhood. Seeing as there is no such thing as a certificate of bachelorhood in the Province of Ontario, this would prove to be a little more challenging.
The man at the Peruvian Consulate gave me the number of someone at Service Ontario, and assured me that I would be properly sorted out.
Sure enough, when I called Service Ontario and explained my story (I needed to have all of my documents legalized and in-hand within 3 weeks, as that was when I was heading back down to Lima for my nuptials), the gentleman informed me that this would be no problem. He said that I just needed to obtain a "Search Marriage" document, and that this would serve as the "Certificate of Bachelorhood". He told me that the fastest way to receive this particular document was to fax in my application.
This seemed strange to me because I was pretty sure that fax machines became obsolete at approximately the same time as Marky Mark's hip hop career, but still: if this reputable government official was telling me that a fax was the way to go, then who was I to argue?
Of course, this reputable government official couldn't have been more wrong. When I phoned Service Ontario to follow up on the status of my inquiry, the person on the other end of the line literally laughed aloud when I told her that I had faxed my application. Apparently, a faxed application takes 8-12 weeks. I was leaving in 12 days.
She advised me to go to the Service Ontario outlet on Bay Street and to bring all of my proof of urgency documents (plane ticket, receipt from the wedding venue etc.). I did so, and the guy said that he'd do his best to have it back to me in 10 business days. When I explained that I didn't have 10 business days, he advised me to speak to my local MPP.
Cue Tony Ruprecht's office. I was on the phone with them every day for a week and a half, trying everything I could to expedite this document. 2 days before I was scheduled to fly to Lima, they phoned to advise me that the document was complete. Perfect. I told the secretary: "Have them fedex it to me overnight. I don't care what it costs."
You will find this unbelievable, but the Ontario Government refuses to send documents via any means other than Canada Post. There was a long silence on my end of the line.
I asked where the office was located, and could I pick up the document in person. "Thunder Bay".
Fuck me.

The document arrived at my house 2 days after I'd left. My brother is a saint and took it to the Peruvian Consulate for me, waited around for 3 hours, had it legalized, and then Fedexed it to me in Lima. To get this single piece of paper to me wound up costing over $200.
But this was only the beginning.

(By the way, obtaining this same document in Peru involves standing in a line for approximately 10 minutes and receiving the document on site. The entire procedure costs approximately 5 dollars)

Step 6 - Take an STD Test
Ummm... Yeah. We both got tested for syphilis. You can't get married in Barranco without taking this test. The test and the ensuing red tape in receiving the results and the certificate took 3 days.
Let's just say that we were both pretty happy with the results. Let's move on.

Step 7 - Have Certificate of Bachelorhood Legalized by Municipality in Lima
This was the gong show to end all gong shows. After waiting for this document to arrive from Canada (after having already gone through the bureaucratic equivalent of the five stages of hell), we had to take it to the Ministerio in Central Lima to have it approved. This process takes 24 hours. So we returned the next day, only to learn that this particular document; despite the fact that it had already been stamped by the consulate in Toronto as an "official" certificate of bachelorhood; needed to be translated into Spanish by an official translator. We did this, and then returned it to the Ministerio. Then both documents needed another stamp. This would take yet another 24 hours, and of course, each one of these steps and stamps costs money.
Only after this document had had more government hands on it than Ashley Dupre were we finally able to take it back to the Municipalidad in Barranco.

Step 8 - Prove You Live in the Municipality You're Getting Married In
In a laundry list of absurdities, this was by far the most ridiculous. Apparently, if you want to be married in a civil service in Barranco, you have to prove that you live in that municipality. So even though I was having all of my Canadian documents stamped 37 different times by everyone in the Peruvian Government and it was the most obvious thing in the world that I didn't live in Peru (let alone Barranco), we still had to give a sworn affidavit; complete with index-fingerprint, Iraqi-voting style; that we lived at the address we claimed (we used the address of the hostel we met at and provided a water bill for approximately 20 times what any normal water bill would be).
I won't even go into the detail of what we had to go through to eventually get this passed. All I will say is that it took 3 days and multiple visits to the Notary Republic, and for much of the time it appeared as though we would not be allowed to be married. I'm still not even sure how it was resolved, but apparently it was.

Step 9 - Announce in Local Paper Your Intentions to Marry at least 10 Days Before Your Wedding
And this is the kicker. Because all of this riduculous red tape needs to be fought through and every menial task needs to be completed at least 10 days before your wedding date so that the appropriate add can be taken out in the paper.
The idea behind this public announcement is that it will allow enough time for those with objections to state those objections prior to the event. The irony behind this is that the announcement is placed in this paper that approximately 17 people read, and the chances of anyone you know ever coming across it are almost nil.
My favourite part of the entire newspaper add ordeal is that after everything we went through to get official documents in hand, fedexed, stamped, translated, re-stamped, and then stamped again; after all of this, the municipality somehow managed to get the announcement wrong... Really? How is that even possible?

Step 10 - Book the Date with the Municipality
Not until all of your paperwork is submitted (we were able to submit the announcement to the newspaper at 4:30 pm on the last possible day) and you bring in a copy of the newspaper the next morning, can you finally request and presumably reserve the civil servant to conduct the service at your wedding.
So what I'm saying is that I had 20 friends and family members with plane tickets from Canada already booked and paid for, and we weren't able to actually lock down a date with the person who was marrying us until 9 days before our wedding... But no pressure. Really.

We spent 8 full days running around Lima trying to get all of this paperwork done, so keep this in mind if you're a foreigner planning on marrying a Peruana. It was one of the most stressful episodes I've ever had to endure, and I wouldn't wish it upon any couple already dealing with the stress of trying to plan a wedding and while simultaneously trying to get things in line for the impending invasion of family and friends...
There's an obvious joke in here about how this nightmare scenario is a metaphor for married life, but I won't go there just yet. You can expect some of those jokes in tomorrow's entry.
Posted by Sean McCallum at 2:03 p.m. 9 comments: