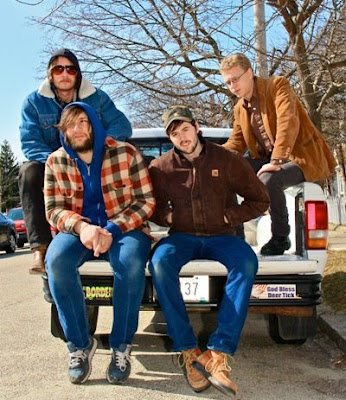 Two years ago, I wrote a piece about the all-time top-5 shows I'd ever attended. Now granted, I have been to a tonne of ridiculously good shows in the past 2 years, so that list probably requires some updating. But last night's performance by John McCauley and company is definitely in the conversation. It was just that good.

(Disclaimer: I attended this show alone. I'm trying to decide whether this means that a) I am the world's biggest loser; b) my friends have gotten incredibly lame as they approach/crest their 30s; or c) I was so stoked about catching Deer Tick's set that I was willing to go it alone. The safe bet is that it was probably a combination of the 3).


In any event, in my failed attempts to recruit a fellow concert goer, I billed Deer Tick (check their MySpace page) as the best thing to come out of Providence since The Rhode Island Slut; their live performance went a long way in solidifying that reputation.

I had met my buddy Dunner and some friends at The Underground Garage for a few pre-show beverages before heading over to the Legendary Horseshoe Tavern to catch the last few tunes by Dawes. They played a solid couple of tracks, with the exclamation point being their closing number with McCauley and a bottle of Jack Daniels on stage which they proceeded to swig from before passing around to various members of the audience, Swine Flu epidemic notwithstanding. Yep, it was going to be that kind of a night. And it was certainly that kind of a crowd.

I've seen countless shows at the world famous 'Shoe, but in all honesty, I haven't seen a crowd that raucous in a long, long time. Over-serving was the order of the day, and without exaggeration, I literally saw some dude pass out in the middle of the melee during one of the tunes. It was absolutely ridiculous. The dancing, the singing, the beer spraying... It was an off-the-charts party atmosphere, and Deer Tick absolutely upped the ante with their performance.

They opened with Easy, which is easily one of my favourite tunes off the new record (Born On Flag Day), and they absolutely crushed it. Their sound is this rollicking, boisterous, rootsy-blues-alt-country mix (think a raucous, booze-filled cocktail of Steve Earle, John Prine, Dylan and The Band 18-months after going electric, and just a dash of late 70's Springsteen and Thin Lizzie for good measure), and for a band that had been partying relentlessly all night, they were tighter than I would have ever imagined. Just a breathtaking display of musicianship.

Houston, TX was another favourite of mine, as was a surprising uptempo and rocking version of Baltimore Blues No. 1. These Old Shoes was phenomenal, as was Ashamed, which resulted in one of the great sing alongs that I have ever been a part of (the lyric "murdered my throat screamin' bloody all night" having never been more appropriate, with McCauley's voice having been annihilated by the night's work). They threw in an admirable cover of Tom Petty's Breakdown just for good measure.

But the highlight for me came at about 2:15am. Most of the shows I've attended at the 'Shoe tend to wrap up at the exact stroke of 2:00am, but the band was still rocking away, with no end in sight. This was probably in part due to the energy of the crowd, and in part due to the band's working class desire to play until the lights come on. Somebody side-stage informed the band that they had one song left, and that would be it... Which prompted McCauley to announce:

Quite possibly the understatement of the year. They kicked into a thrashing multi-song medley that finished with a mosh-inducing version of Labamba, which concluded only when McCauley, lead guitarist Andrew Tobiassen, and the lead singer from Dawes leaped from the stage and crowd-surfed to the back of the dancefloor... I was soaked in beer and sweat, and it was absolutely glorious.

The bar couldn't turn on the house lights fast enough, but that didn't stop the crowd from relentlessly chanting for an encore, which McCauley eventually provided by sitting down at the keyboard and coaxing his bandmates into one more thrashing blues tune to the rapture of the entire congregation.


Needless to say, it was one of the finest performances this critic has ever seen.