Tom Brady: Out for the Season 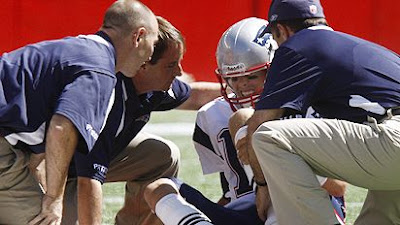 From ESPN.com
Tom Brady will miss the entire NFL season with a left knee injury that will require surgery, leaving the New England Patriots without one of the game's great quarterbacks, their Super Bowl hopes severely damaged.
The 2007 NFL Most Valuable Player will be placed on injured reserve, the Patriots said Monday, one day after his knee was injured in the first quarter of a 17-10 victory over the Kansas City Chiefs.
A statement issued before coach Bill Belichick's news conference said Brady will have surgery, ending his 128-game starting streak, the third longest for a quarterback... (read more)

What are the chances that Gisele Bundchen is lathering herself up in whipped cream for Matt Cassel?
The plain truth of it is, the New England Patriots are a 9-7 team without Tom Brady, the AFC East is the Buffalo Bills' to lose, and Matt Cassel is no James Van Der Beek.
Posted by Sean McCallum at 4:04 p.m.

If you're looking for a Hollywood comparison, it's clearly "Varsity Blues" (click here for my review): Brady as Lance Harbor (the golden boy with a smoking-hot girlfriend who blew his knee out in the first game), Cassel as Jonathan Moxon (the career backup who never imagined he'd actually play), Wes Welker as Tweeder (the team's most reliable receiver even though he's 5-foot-7), Laurence Maroney as the starting running back with every tool who never gets touches in the end zone and kills your fantasy team, and Bill Belichick as Bud Kilmer (the Hall of Fame coach who isn't afraid to bend the rules). Everything is there except for Billy Bob, the lovable fat guy who scored the championship-winning TD in the movie; we don't have a Billy Bob unless Vince Wilfork can gain another 100 pounds between now and December. You would have remembered these similarities, but the only thing anyone remembers from Varsity Blues at this point is Ali Larter's whipped cream sundae and the fact their stripper-teacher (as numerous readers have pointed out) looked exactly like Sarah Palin.

More from the Simmons piece:


Q: If we go back to 1:15 remaining in February's Super Bowl, the Pats have (since) suffered the Tyree catch, the Burress TD, the near-miss Hail Mary to Moss and then Brady's season-ending injury at 7:38 of Week 1. Could this be the worst 8 minutes, 53 seconds in NFL history?
-- Howard L., Las Vegas


SG: Apparently, you missed the Rams-Eagles game. Don't rule out the 2008 Rams giving us the worst 960 minutes in NFL history. But you're right, in terms of stomach punches, that had to break the record for "Most legitimate stomach punches within nine minutes of NFL action," with Brady's knee injury giving birth to a whole new Level of Losing: The "Left At The Altar Loss," when you're waiting for months and months for the season to start (like planning a wedding), then you have your fantasy drafts (the bachelor party), then you have the rehearsal dinner the night before (making your starting fantasy lineups, making your bets, figuring out which games you'll watch Sunday), then you go to the church for the actual wedding (getting in front of the TV for the 1 p.m. ET games) … and as you're standing on the altar, you find out your bride either changed her mind or got run over by the limo driver. That was me and every other Patriots fan Sunday -- we had our tuxedos on, we were ready to go, and suddenly we were sitting in a waiting room in a hot tuxedo waiting for medical updates on our comatose fiancee and halfheartedly trying to talk ourselves into one of the bridesmaids.

I love this! Karma is a bitch! Tuck rule? Tuck?