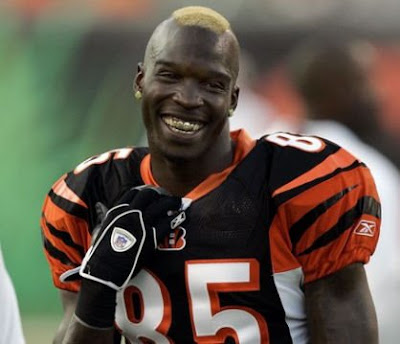 Say what you will about his sanity, but the first time I clicked on the ESPN.com roster for the Cincinnati Bengals and saw the name "Chad Ocho Cinco", I actually laughed out loud. For me, that makes the entire fiasco worthwhile.
(By the way, what are the chances CJ knows that Ocho Cinco actually means "eight five", and not "eighty-five"? Do you think anyone should tell him?)

Somewhere out there, Rod Smart is nodding his head knowingly.


Enjoy the next 17 weeks of NFL fantasy bliss. I hope your league's draft was as entertaining as that of the Washington Redskins:

For the record, I may have to retire the moniker "Frank Reich's Electric Groove" in favour of "The DC Lumber Company". In light of Smoot's alleged involvement on The Love Boat, you don't have to reach too far for the innuendo. That's grade A stuff.
Posted by Sean McCallum at 6:02 p.m.

Taken from The Sports Guy's predictions for 2008:

"Here's my goal for the Chad Ocho Cinco era: The Bengals trade him to a team that already has an established No. 85. Ocho Cinco keeps offering the guy money for his jersey. The guy keeps saying no. Eventually a bitter Ocho Cinco has to either offer him like $500,000, or wear Ocho Seis or Ocho Quatro for the season. Please, Lord, let this happen."