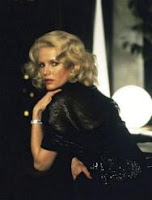 Not to beat an obvious analogy to death, but I think today's game pretty well solidified Jessica Simpson's place in the realm of 21st century sports as the ultimate anti-muse.

For those of you unfamiliar with the work of Memo Paris, her role in the Robert Redford classic "The Natural" is best described by sparknotes, which states: "the role of Memo Paris is fairly obvious: she is the destructive force, the antithesis to the hero that leads to his downfall." Ouch. Harsh words to describe the modern day Daisy Duke, I know, but the evidence seems to suggest just that. As Seven from Unsportsmanlike Comment points out:

Signs she's bad luck: Hmm, let’s see … Lachey has been reduced to making appearances at home games of the Triple-A baseball teams he owns and hosting a show about choirs. Cook did those hideous “It’s October” commercials and cemented his status as the unfunniest man in America. He still hasn’t realized he’s a total joke. Levine is still putting out shitty songs. Same with Mayer. And Romo basically played an entire game with one hand around his choking neck with Simpson in attendance.

The truth is, I really do feel bad for Tony Romo. He seems like a genuinely good guy, and he's an even better quarterback. He played a hell of a game today, and if his receivers reel in half of those horrifically dropped passes (I'm looking at you, Patrick Crayton), the Cowboys win this game going away. But he'll take the brunt of the blame because he's dating an infamous starlet, and because he spent three days in Mexico during his week off (it should be noted that the Cowboys two best offensive players today were Romo and Jason Witten, both of which were in Mexico last week).

And to be honest, it's hard to blame Romo for dating Jessica Simpson. I think Bill Simmons explained it best when he pointed out in one of his podcasts that, the thing we forget about celebrities is that most of them were everyday normal people like the rest of us at one point in their lives, and then all of a sudden they became famous, and were suddenly handed all of the benefits of fame (you know, like being in the position which allows you to date other famous people), when deep down inside, they're still those normal people they were before. So Tony Romo thinks to himself, "Holy shit! I can't believe I have the chance to date Jessica Simpson!", and because this was a prospect that was so out of the realm of possibility in his former life, he goes ahead and dates her because, among other things, he's afforded the opportunity of calling up his buddies back home in order to brag about the fact that Jessica Simpson is currently naked in his bed, and this more than makes up for the fact that they probably have absolutely nothing in common or that she may or may not wind up sabotaging his career. And Jessica Simpson thinks to herself "I can't believe I have a chance to date the quarterback of the Dallas Cowboys!..." (undoubtedly her most profound thought on that particular day)...

And that, in a nutshell, is why you always see famous people dating other famous people, and why those relationships usually end somewhere down the road... Because the two celebrities eventually realize that they don't actually like one another, and the only reason they were dating the other in the first place was because that person was famous.

So Cowboys fans, have no fear. By the time next season rolls around, Tony Romo will be dating some new celebrity, and he'll probably wind up taking your team to the Superbowl.

For a fantasticly in-depth analysis of the Simpson-Paris corollary, check out this piece on Unsportsmanlike Comment. Definitely worth the read.

As for Wade Phillips, this loss serves him right for benching Doug Flutie in favour of Rob Johnson in the Music City Miracle game back in 2000, an indefensible sin for which he will continue to pay for all of eternity. Fans of his teams can expect similar results for the duration of his coaching career, and rightly so.

And finally, who would have ever guessed that Eli would go deeper into the playoffs than Peyton? I'm at a loss for words.

I call bullroar. I've thought Romo sucks even since they played the Bills. The Cowboys were the most over rated 13-3 team I can think of. Although, T.O. crying at the press conference was quite something... believe it or not, I was touched. I'm buying a jersey and getting a diamond studded earring (right ear, of course).

I think that link could have done without the Brenda Warner bashing. She is clearly the first lady of football and should be treated with respect.

I heard a wicked nickname for Jessica Simpson...

I don't know shit about sports, but that is effin' funny stuff.

Searching for the Ultimate Dating Site? Join to find your perfect match.