Just leave it to Billy Volek and Darren Sproles to go off and ruin the first ever "Cheater Bowl" by upsetting Peyton Manning and the pumping-artificial-crowd-noise-through-the-speaker-system Indianapolis Colts (I still can't get over this clip, when the "crowd noise CD" skips; really, if you're gonna blast fake noise through the speakers, at least make sure your CD doesn't have any scratches on it - that's cheating 101).

And despite the fact that I was openly rooting for the Chargers to knock off the Colts, I can't help but feel a little disapointed by the fact that we won't get to see the Indy-New England rematch. The game back in November was a classic, and the Colts-Pats AFC Championship game has become the pseudo Superbowl and a winter rite-of-passage of late.

Let's just hope that the Giants can knock off Jessica Simpson's boyfriend's team so we can see Brett Favre in another January game at Lambeau. Damn was that fun last night. 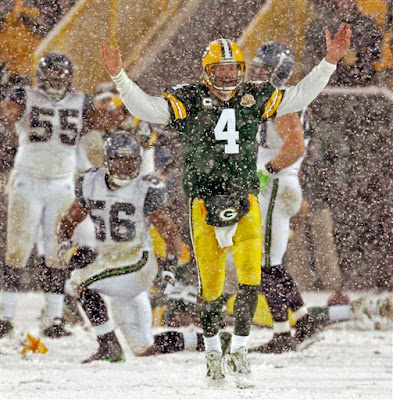