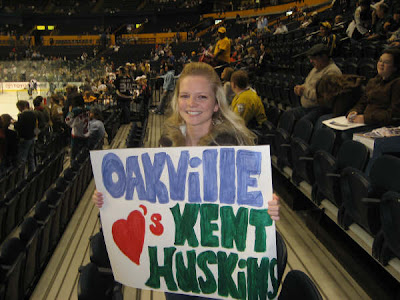 Editor's Note: The following post was written by the freshly devestated Lisa McCallum, who is a first-time contributer to seanmccallum.com. You can read and hear more of her work at: Lisa McCallum's MySpace page.

Over the phone - and who knows how much that will cost on our cell phone bill - you suggested I make a sign for good ol' Kent Huskins. Well, let me tell you. All week I had been talking about him and how excited I was to possibly talk to him (I don't even know what he looks like or what position he plays, just that he's won a Stanley Cup and that's good enough for me!) so I went on and on to Blake about how cool the game was going to be. What an added bonus? I purposefully bought tickets for that specific game cause I just knew I'd have hook-ups.

So after our phone conversation, I made a stop at the drug store specifically to buy some bristol board so I could make a sign for Kenty. I even told Blake that I'd be embarrassed to hold it, but darn it - I'd do it for Kent. So, I then spent the next two hours painting "Oakville Loves (it was actually "hearts") Kent Huskins" in nice pretty paint. I was so proud of myself. Off we went to the game about 5:30pm - had to get there early to see the boys warm-up! What a perfect place to hold up my sign?

So, we get to our seats which were 7 rows up to the right of the net - money seats - we've got our big, tall beers in hand, the crowd is getting revved up for the big game and finally the players come onto the ice to warm up. As I'm getting the sign out from under our seat I heard Blake say, "I don't see him". Well, no problem I thought.. I'll just check what number he is in the program. 40. Defence. GREAT! I'm sure I'll find him now. Then I heard Blake say, "I don't think he's playing this game." "What do you mean he's not playing this game? What does that mean?" I was still completely lost and perplexed as to how some players "don't play" some games. I said, "oh so maybe he's just sitting on the bench and they'll only play him if they REALLY need him, but he'll be on the ice right?" or even better, "He's already warmed-up I bet, he doesn't need it tonight but he'll be playing. FOR SURE."

I'm not sure Blake knew how to break it to me. So just in case, I took a picture with my sign so I could somehow make it to your blog. I didn't just spend 2 hours on a sign I've never made for anyone else for nothing!! Still, I was keeping positive. Maybe he just didn't feel like warming up with the team, but SURELY he'd play.


Regardless, it was a WICKED game! 3 fights right in front of us and 3 out of the 4 goals in front of our net!! Great game but no Kent. As soon as I can get the picture onto the computer, I'll be sending it. I still hope to make the blog.


Heart broken and truly yours,