Let me begin by saying that there is a long and storied history of Holiday dysfunction in the McCallum family. The tradition began back in the mid-60's when my Grandfather; presumably after a little too much Christmas Eve mirth and merriment; while attempting to retrieve the presents that Santa had stowed away in the loft above the garage, ended up taking a spill off the ladder and wound up on the concrete floor of the garage with a couple of broken ribs. The torch was proudly passed on to my father who, in his younger days, would enjoy the mirth and merriment of the season with a little too much gusto, and there are tales of hitchiking in blizzards and public urination that we need not delve into. As the eldest McCallum in the next generation, I was a quick learner and was keen to pick up on what my role was supposed to be, leading to an incident one Christmas Eve where I stayed at a Christmas party drinking Scotch until after 3 in the morning, missing the family holiday tradition of eating shrimp and sausage rolls while watching "National Lampoon's Christmas Vacation", and capping it all off by passing out in the basement and puking violently into my sleeping bag until sunrise...


We call this time-honoured family tradition "Ruining Christmas", and it has become an ongoing competition to see who will be the family member lucky enough to "Ruin Christmas" that particular year.


This year, however, it seems there was competition for the coveted crown of Christmas Destroyer. I'll leave it to the dotcomrades to determine the victor:

So, after a ridiculously action-packed Christmas Eve day of visiting my Aunt and her boyfriend in Waterdown, my Unkle and Aunt in Oakville for brunch and multiple cocktails, the Sullivan family for many more cocktails, the Foley family for a quick hello, and then embarking on a 3-hour drive through slush and sleet before finally arriving in Dornoch, we settled in for a night of "National Lampoon's" and a few choice beverages, and it seemed as though we were well on our way to a Christmas gone according to plan. Could it be possible that we go a Christmas without having someone commit a highly offensive act of sacrilege? Say it ain't so.


Luckily, we awoke the following morning to a ghastly sight:

It turns out that my parents have been having a few visitors to their property of late. And despite the fact that one of the main reasons they moved to Grey Bruce County was to be closer to nature, apparently they enjoy playing the role of God and determining exactly which brand of nature they remain close to. And wild turkeys are not the kind of nature they enjoy being close to. So on the morning of the 25th, my dad decided to celebrate the birth of Christ by playing Lee Harvey Oswald to the Meleagris gallopavo's Kennedy. Apparently, wild turkeys were not present at the nativity scene.


The result was that, as we sat in the living room with the shimmering tinsel bedecked tree and Bing Crosby singing for a white Christmas, we were experiencing the magic of family and experiencing all of the wonders of the holiday season while looking out onto the scene of a crime, the blood-spattered carcass still laying splayed in the snow not 50-feet from the house. A holly jolly Christmas indeed.


My favourite part of the whole incident is my dad's rationalization for brandishing his .22 at something as innocent as a large-ish Galliformes. He loves to tell me: "It's a different world up here. You have no idea what it's like. Up here, it's kill or be killed." I'm not sure of the last time that a pack of malevolent wild turkeys ransacked a man's house and systematically slaughtered his family, but I guess I'll have to take his word for it.

So, Sandra and I, for reasons both logistical (her parents live near Chatham, mine near Owen Sound - a five hour drive in the best of conditions) and nostalgic (neither one of us could remember the last Christmas spent with just the family), decided to spend Christmas with our own respective families. And I have to say, it was a real treat for both of us. I can't remember the last time the five members of my immediate family spent 36 hours together, and it really was something special, the above-mentioned senseless killing notwithstanding. And I believe Sandra felt the same way, expressing how special it was to spend Christmas day with her family.

In any event, Sandra's older sister Jessica had flown home from Newfoundland for the holidays, which was another reason Sandra wanted to be home with her family. Now, as has been documented in the past, Sandra and Jessica have a "love-hate relationship"... and that might be understating it. They seem to get along famously on the phone (I know this because, whenever I do something wrong, Sandra is almost immediately on the phone with Jessica explaining exactly what I did that was so "insensitive"), but when it comes to seeing one another face-to-face, those estrogen-fuelled sparks seem to inexplicably ignite, more often than not leaving a path of bitterness and tears in their wake. Believe me when I say that is usually isn't pretty.


Cue Boxing Day. After a December 25th filled with joy and happiness, the Tipping girls were a little less-than-chipper early Wednesday morning as they awoke to embark on the 5-hour drive to an Aunt's house in Thornbury for their extended family Christmas. I guess they were already way behind schedule, so as Sandra was packing the truck with everything they needed to bring to Thornbury, Jessica decided that she wanted to take the family's new car for a spin. Again, they were already late, so Sandra felt that a leisurely drive through town probably wasn't in the family's best interest. Toss in the fact that it was 7 o'clock in the morning, Jessica wasn't helping to load the truck, and Sandra is a middle child, and you can probably imagine that Sandra was antagonizing her older sister. But again, this is purely speculation on my part.


What happened next was the sort of thing you'd expect to see in the sequal to "A Christmas Story."


Apparently Jessica had spent the previous two days working tirelessly on a gingerbread house to bring as a showpiece to the family Christmas on Boxing Day. She'd fashioned the sculpture in the shape of a lighthouse (because she lives in Newfoundland), decorated it with candy (including gummy sharks swimming in a candy blue sea), and had even gone so far as to melt sugar into liquid in order to give the lighthouse windows an authentic feel. It warrants mentioning that Jessica is one of the most creative people I know, so I can only imagine what this thing must have looked like... Breathtaking. 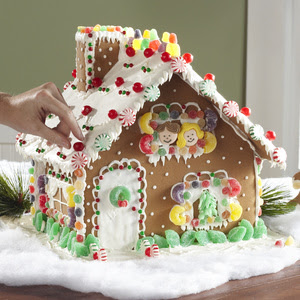 In any event, she'd completed the gingerbread house late Christmas night, and had it packaged in a cardboard box with layers of duct tape for safekeeping, all ready to be shipped along with the family up to Thornbury.


Which brings us back to Boxing Day morning. Jessica is scraping the ice off of her parents new car so she can take it for a joyride, while Sandra is packing Jessica's stuff into the truck. Sandra doesn't like the fact that Jessica is unnecessarily making the family even later than they already are, so she makes some kind of middle-child comment to the effect of: "If you want to go for a drive, that's fine... we'll just see if your gingerbread house makes it onto the truck in one piece..." As she said this, she was pretending to kick the gingerbread house, but claims that she didn't make any contact.


The insinuation of sabotage must have made Jessica go off, because she immediately charged Sandra with the ice scraper and swung like a pre-Mitchell-report Slammin' Sammy Sosa, hitting Sandra in the arm with such force that she fell to the ground screaming and writhing in pain. You probably know where this one is going.


So infuriated with her sister's violent actions was Sandra that she got up from the ground, dusted herself off, and proceeded to treat Jessica's priceless work of edible art as if it were a 45-yard field goal attempt in the Foxboro snow, booting that Gingerbread Lighthouse halfway to Thamesville, and obliterating it into a thousand pieces in the process. I'm pretty sure that estrogen-spiked bedlam ensued, and you can use your imagination as to what kind of action unfolded in the aftermath.


Needless to say, there was a palpable tension in the air for the next 5 hours as the family crammed into the truck and drove on their merry way to experience all of the magic that the holiday season has to offer. And perhaps even more needless to say is the fact that Sandra and her sister haven't spoken to one another since.

So there you have it. Two families. Two Christmas's ruined. And I'm proud to say that I was a part of both of them.

Where do you think you're going? Nobody's leaving. Nobody's walking out on this fun, old-fashioned family Christmas. No, no. We're all in this together. This is a full-blown, four-alarm holiday emergency here. We're gonna press on, and we're gonna have the hap, hap, happiest Christmas since Bing Crosby tap-danced with Danny fucking Kaye. And when Santa squeezes his fat white ass down that chimney tonight, he's gonna find the jolliest bunch of assholes this side of the nuthouse.

hahaha... my winner is Sandra; like your dad said, it's kill or be killed, he was protecting his family!
-dvz