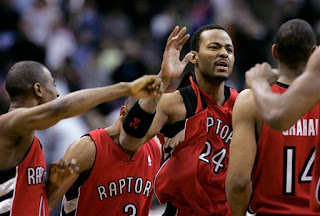 Tonight was the exact reason I absolutely abhor Raptors TV. Friday night, have the pa d to myself, don't much feel like going out because I know I'll be engaged in a debaucherous gong show tomorrow night, Raps have a key Eastern Conference and potential playoff matchup against Agent Zero and the boys (by the way, Agent Zero has to be the coolest nickname in basketball, just slightly ahead of The Truth and about a thousand notches above The 'Stache), and I'm all geared up to settle in for a night of hoops and work. But when I flick through all of the sports stations, the only thing I can find is Lacrosse and Wrestling (not that there's anything wrong with wrestling, for the record). I was utterly devestated.

As it turned out, this particular game will probably go down as one of the three greatest finishes in Raptors history, and I was forced to watch it unfold on the ESPN ticker, with my co mputer uploading every 15 seconds to give me the updated score. I felt like a young Mike Foley being conscripted to a childhood of watching Jays games on The Score before it was an actual television station with actual programming, showing only intermittantly updated scores of the games with a commendable oldies soundtrack simulcasted from 1150AM in the background from which to groove and subsequently ease the pain. But I felt that pain tonight, and as my computer uploaded and showed o:00 4th followed by the blurb Morris Peterson makes 32-foot three point jumper, I leapt out of my chair screaming with both elation (for

Mo) and contempt (for the bastards at Raps TV who made me miss the play live), while trying to imagine what octave the Swirsk's voice reached as he undoubtedly screamed "ARE YO U KIDDING ME?!?! ONIONS BABY!!! ONIONS!!!!!!
But it wasn't until I saw the actual replay that I realized exactly what I'd been deprive d of. That was the most ridiculous circus three I've ever seen, and I'm pretty sure I would have hit the ceiling whlie yelping like a sophmore sorority girl finding the G-spot for the first ti m e h ad I seen it in real time. Lord love Morris Peterson and his
initially-intended-to-be-a-protest-against-every-GM-that-passed-him-up-in-the-2000 draft- headband. Absolutely off the charts. By the way, the line of the night came from The Score's Sid Seixeiro, who quipped: "Chuck got so excited on that call that he bruised his Salami and Cheese". Classic.

Speaking of The Swirsk, I just leaned an incredible tidbit about our boy Chuck. Did you know that that great SNL skit with the Superfans ("Da Bears") was named after our very own Chuck Swirsky? That's right. "The Aki Berg of the Fan Radio Network" was the inspiration behind Bill Swerski's Superfans. I've never had more respect for the man.

On to the final four. I can't imagine it being possible to be more jacked for Saturday's games than I currently am. The one great thing about there being a complete lack of any hint of upset this year was the quality of play this past weekend. Honestly, that Ohio State comeback on Thursday night was one for the ages, culminating in that ridiculous Oden block to end the game. Didn't think that one could ever be outdone, and then Georgetown pulls the miracle off against UNC, not only setting up one of the greatest big-man showdowns this Saturday night, but allowing me to go 4 for 4 in my final four bracket. With a Florida win tomorrow, I pretty much sew up the coveted salutation of Hurricane's 2007 NCAA Bracket Champion... or something like that. I can't imagine there's any kind of a trophy or formal presentation, and to be honest, I don't think there are a great number of people who care at this point, but I'll end up with a decent chunk of coin, at the very least. And bragging rights for the rest of my life (I went 4 for 4 back in 2001 {Maryland, Michigan St., and Duke over Arizona in the final} but finished second in the massive BMO/Nesbitt Burns pool, getting nothing but my money back for my efforts).
Enjoy the weekend, enjoy the killer Hoops action Saturday night, and if you happen to come across any Raptors TV brass in your travels, be sure to give them a swift kick in the nuts for me.
Posted by Sean McCallum at 10:37 p.m.